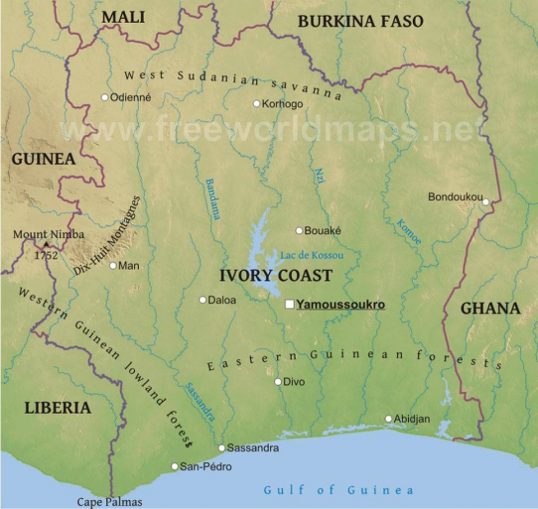 Yet another agreement has been reached that is aimed at ending the unrest among military forces in the West African state of Ivory Coast.

Over a five-day period, soldiers took control of several cities including Bouake, the second-largest in the country, after a spokesperson for the disgruntled troops claimed that they were dropping their demands for the full payment of promised funds, totaling $8,400.

In repudiation of the apparently false statements regarding ending the appeal for the bonuses, Bouake was placed under the control of the soldiers, who regulated passage in and out of the city. The rebellion quickly spread to several major urban areas, including the commercial capital of Abidjan. There, the Republican Guards who are loyal to President Alassane Ouattara fired shots above the heads of the protesting troops.

Ivory Coast is the world’s largest producer of cocoa. Exports had been impacted due to the mutiny when ports were closed on May 15.

Some reports that surfaced on May 16 indicated that some of the angry soldiers had already begun to be paid. Banks which had not been operating in Abidjan were reopened as well.

Just one day prior to the announcement of an agreement, cocoa firms and banks, along with government buildings in the western regional center of Daloa, were shuttered. Residents reported that gunfire could be heard throughout the day.

A cocoa cooperative manager, Aka Marcel, told the international press in regard to the tense situation in Daloa that “all businesses are closed here. The banks are closed and so are the cocoa-buying businesses. The soldiers are in the streets on foot and on motorbikes. They’re shooting in the air.” (Reuters, May 15)

During the course of the unrest, several more cities were impacted in addition to both Bouake and Abidjan. The port city of San Pedro, near neighboring Burkina Faso, saw the blocking of the border by the rebelling soldiers.

One spokesman for the soldiers in the most recent dispute, Sgt. Seydou Koné, said: “We accept the government’s proposal. … We are returning to barracks now.”

Koné was speaking from the center of the mutiny in Bouake.

Another spokesperson for the rebel soldiers, who wanted to be called simply Sgt. Cisse, said: “We’ve just handed back control of the entrances to the city (Bouake) to the police and gendarmes this morning, and we’re returning to our barracks. There’s no one on the streets. It’s finished. They are all in the barracks. There hasn’t been a single shot fired since 8 a.m.” (Reuters, May 16)

However, during the early morning hours outside of Bouake it was reported that soldiers were blocking the entrance of some 200 commercial trucks. Military forces which remained loyal to the Ouattara regime emphasized that they were working to re-establish control in order to maintain the existing political order.

There are approximately 8,000 troops out of 22,000 in total within the military apparatus involved in the dispute. Nonetheless, on May 13 three people who were said to have been demobilized former soldiers were shot by the mutineers.

Sgt. Koné was quoted as saying that the former troops were shot to prevent them from organizing their own separate demonstrations. In other cities such as Korhogo, Daloa and Abidjan, demonstrations against the mutinous soldiers took place.

Altogether there were at least six people reportedly wounded. One person who had suffered gunshot injuries died in Bouake.

Sgt. Koné said during the attempts to suppress the protests that the rebellious troops had no problem with the population. The spokesperson for the mutinous soldiers said their only objective was to get paid.

The regional Economic Community of West African States (ECOWAS) condemned the mutiny, demanding that the soldiers return to their barracks immediately. Republic of Liberia President Ellen Johnson-Sirleaf, who is the current chair of the Authority of Heads of State for ECOWAS, emphasized that the unrest placed the stability of the region in jeopardy.

With the purported resolution of the most recent split within the military, it still does not address the broader questions of economic stability and political accountability.

Political dimensions of the crisis

These mutineers are the forces that supplemented French paratroopers in the putsch against former President Laurent Gbagbo, who was targeted for removal after he defied France and the United States in a dispute over the national elections in 2010.

In April 2011, Gbagbo, his wife Simone and other top officials were arrested by French troops at a makeshift headquarters in a hotel. The president was later deported from his own country to the Netherlands, where he is now facing trial by the controversial International Criminal Court (ICC).

Since the ascendancy of the Ouattara regime, the Western-based firms have made substantial investments inside the country. Up until recently, the West African state was being hailed as having one of the fastest growing economies in the region.

However, over the last two years there has been a precipitous drop in the prices of cocoa and oil. Petroleum workers engaged in a strike during February 2016 demanding an end to layoffs which would impact up to 10 percent of the workforce of a leading employer.

Simone Gbagbo, who is a political figure within the Popular Front Party (PFI) that was overthrown in April 2011, was charged and convicted by the Ouattara regime for alleged crimes committed during the struggle against French foreign policy machinations in 2010-2011. She was imprisoned under a 20-year sentence and charged again for alleged crimes against humanity.

In late March, a court in Ivory Coast acquitted her on the additional charges of human rights crimes. Nonetheless, she has not been released on the previous convictions, which are highly politicized.

Former President Gbagbo is being targeted in the Netherlands by an institution, the International Criminal Court (ICC), which has been criticized within the highest deliberative body of the continental African Union (AU). At the 50th anniversary Jubilee summit in May 2013 commemorating its predecessor, the Organization of African Unity (OAU), member-states raised the potential for a massive withdrawal from being signatories of the Rome Statute, which laid the framework for the creation of the ICC.

ICC officials have also issued warrants against Mrs. Gbagbo. In this instance, the current government of Ouattara has refused to extradite the former first lady to the Netherlands to join her husband in detention in Europe.

Several African states have made the declaration of resignation from being under the jurisdiction of the Netherlands-based institution. These include Burundi, South Africa and Gambia. The U.S. and EU-backed ECOWAS intervention and subsequent coup that removed Gambian President Yahya Jammeh in February replacing him with Adama Barrow, immediately resulted in the Western-backed leader re-entering the small West African nation back into the ICC.

A high court in South Africa has attempted to render the African National Congress (ANC) government’s rejection of the ICC null and void, ruling that the withdrawal is unconstitutional without parliamentary approval. Such decisions prompted by legal action initiated by the opposition Democratic Alliance (DA) illustrate that key rulings handed down by the South African courts are reflective of the ideological struggle emerging within the post-apartheid political construct.

Almost all of the investigations, indictments and trials by the ICC are directed against African heads of state and rebel leaders. In the cases of Libya and Ivory Coast, investigations by the ICC were carried out in tandem with military bombings and invasions to topple governments at variance with the administrations in Paris and Washington.

Moreover, the egregious imperialist war crimes and acts of genocide resulting in the deaths, injuries and displacement which factor into the millions against the peoples of Afghanistan, Iraq, Haiti, Libya, Syria, Yemen, Venezuela, Zimbabwe, South Africa, Angola, Somalia, etc., have never been the focus of the ICC and its prosecutors. Consequently, many African states, if not publicly, raise concerns privately, in the belief that the ICC is an instrument for the extension of colonial rule.

The ICC is a mechanism designed for the explicit purpose of facilitating interference in the internal affairs of African states. Although the leading Western capitalist governments have refused to adhere to the purported authority of the ICC, the institution is utilized as a foreign policy tool to maintain destabilization campaigns against adversarial forces and those which can be identified as constituting a rationale for U.S., EU, NATO and their allies to carry out aerial bombardments, the imposition of draconian sanctions and the engineering of military and political coups.

This recent unrest among the defense forces in Ivory Coast follows a similar rebellion in January, when promises were also made that have apparently not been met. The government has acknowledged that despite the foreign direct investment model of economic policy, the implementation of such an approach is heavily dependent upon exports of primary products to Western markets and the granting of tax havens to the transnational corporations and financial institutions.

Ouattara was a longtime functionary of the International Monetary Fund (IMF), which, as a result of the contemporary world crisis, is becoming more involved in loan projects that have historically proven extremely disadvantageous to African states. The neocolonial systems of relation between the former industrialized countries in regard to their previous colonial and semicolonial territories have long exhausted economic usefulness. The AU and popular forces outside of governments have continued to address the need for deeper integration of African states and the development of regional monetary and industrial zones which place priorities on continental development.

The ongoing detention and prosecution of President Gbagbo does not serve the interests of the Ivorian and African people. Such a scenario only serves as a means to reassert Western dominance of the political affairs of the continent.