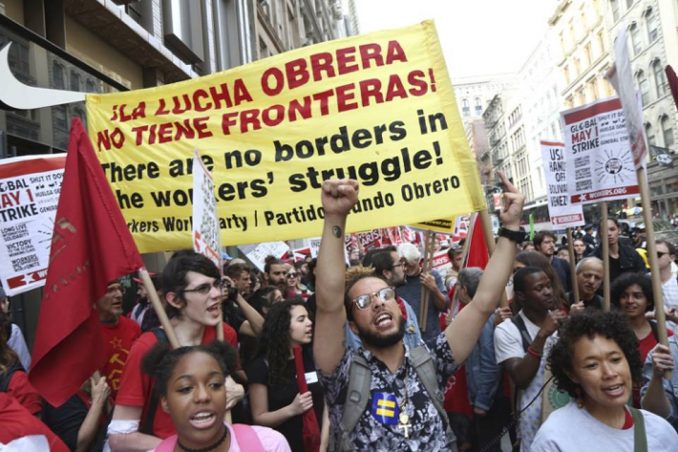 The May Day Union Square Coalition held a press conference on the east side of New York’s City Hall on May 10 to denounce the New York Police Department’s racist targeting of protesters at the May 1 protest in Union Square. They demanded the resignation of New York City Police Commissioner James O’Neill, that all charges against those arrested on May Day be dropped immediately, and that Mayor Bill de Blasio be held accountable.

The press conference began with speakers who were arrested on May Day. These included Filipino and Palestinian people who represented the New York Committee for Human Rights in the Philippines, New York City Students for Justice in Palestine, Anakbayan New York and the International League of Peoples’ Struggle. They highlighted the violent and aggressive tactics that the police used to arrest and brutalize them. The speakers also addressed who the police are targeting, which is the most oppressed and vulnerable in the city. They said this was demonstrated by the arrest of people of color, LGBTQ people and women on May Day.

The speakers made clear that they had the legal right to march, as guaranteed to them in the First Amendment of the U.S. Constitution. They described how the police are being militarized and are trying to suppress their freedom of speech and right to assemble.

Showing solidarity with those arrested on May Day, activists who were arrested at other marches in the city spoke about their experiences. This included people of color and queer people from the People’s Power Assembly and ICE-FREE NYC. They asserted that the police target oppressed people and use excessive force in doing so, in an attempt to intimidate them from not entering the streets.

The press conference closed out by condemning the violent reaction of the police to people exercising their right to march. Those present vowed to build broad support for a defense of their rights.