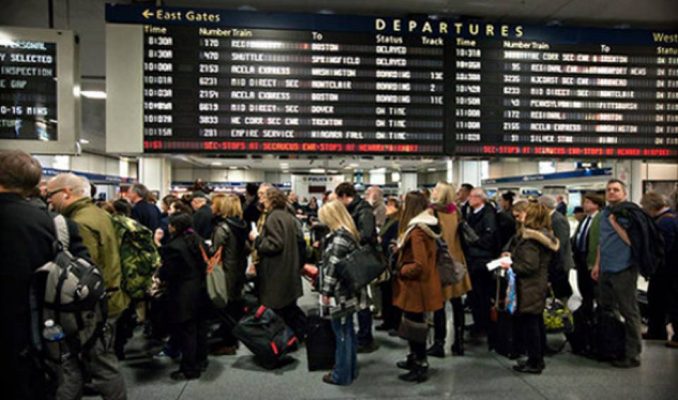 The 600,000 or so people who daily use the transportation hub at Penn Station here depend on maintenance-of-way (MW) workers. These people maintain the tracks so trains can operate safely. Signal maintainers are also needed. Other workers provide information, sell tickets, clean cars and clean the station itself.

All these workers must confront the dilapidation of the 107-year-old Penn Station. Amtrak, which is controlled by the U.S. government, has been underfunded since it was founded in 1971.

Both New Jersey Transit and the Long Island Railroad are commuter railroads that use Penn Station, with a big increase in the number of passengers since 20 years ago. Their 1,200 daily trains make repairs difficult.

The key role that MW workers play can be seen in the April 3 derailment of a NJT commuter train carrying about 1,200 passengers. Three cars in the middle of the train, which was traveling very slowly, came off the rails. This was the second derailment in less than two weeks.

The workers’ first task was to get all passengers off the train; there were no major injuries because of the slow speed. Then the re-railing of the cars was a tricky and risky job for workers

The derailment occurred near where switches are thrown to direct incoming trains to their platforms. The MW workers had to be protected from the trains. Dispatchers provided some protection, but workers needed to spot trains and sound a warning to pause the work.

This small safeguard was mandated by the 2016 amended Roadway Protection Act, one of the rare national worker-­protection laws passed in the U.S. in the last 30 years.

Amtrak, demonstrating a reckless attitude toward worker and rider safety, later admitted that a wooden tie had rotted and that it knew about the problem, but didn’t think it serious enough to replace.

On May 3 a big sewage leak came down from an

For the cleanup, maintenance workers needed rubber gloves and mops. Some had hats or handkerchiefs over their hair.

Based on photo coverage by the Daily News, it doesn’t appear any other protective gear was issued to workers handling the seemingly raw sewage.

As the sewage flow lasted until the late afternoon, both Amtrak and the LIRR made a point of announcing that train service wasn’t interrupted.

The Penn Station MW workers are covered by a union affiliated with the Teamsters, but many workers in the passenger areas don’t have union protection.

Meanwhile, New York Gov. Andrew Cuomo is using the Penn Station incidents to call for turning Amtrak construction and management over to “a private-sector operator.” (Albany Times-Union, May 21)

But a move to privatization will not provide better safety, wages or benefits for Penn Station workers.

Workers know this, and those at the Port Authority of New York and New Jersey have been rallying for months to improve their working conditions.

Service Employees Local 32BJ announced May 16 that it is organizing for legislation to raise wages to $18 an hour for workers at New York airports and at private companies providing services at bus terminals and train stations. (New York Times, May 16)

The union campaign would cover as many as 40,000 workers in those ­locations.