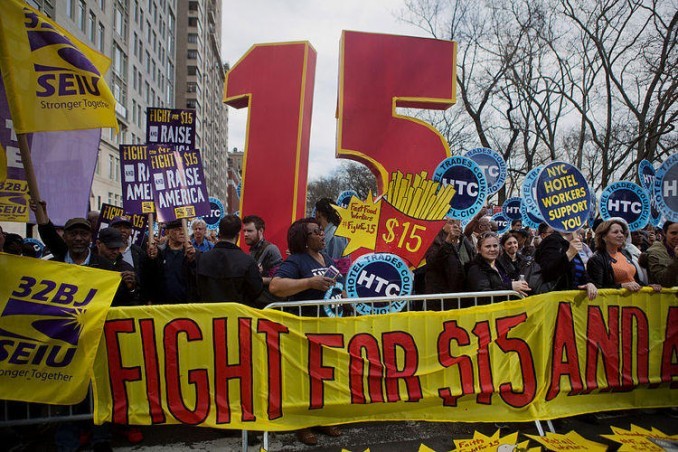 Des Moines, Iowa — A new Iowa law stripped away minimum-wage increases across the state the week of March 27 and set a dangerous precedent for Hawkeye State workers.

For the first time in over 20 years, the Republican Party dominates the state government. GOP lawmakers have already succeeded in passing a number of damaging anti-worker laws in the first months of the 2017 legislative session.

They introduced House File 295, a minimum-wage pre-emption law to roll back wage increases in Johnson, Linn, Polk and Wapello counties. HF 295 passed the Iowa Senate in a vote of 29 to 21 — with a unanimous vote from Republicans — and was signed into law by Gov. Terry Branstad.

HF 295 marks the first time a state has rejected a minimum-wage increase already in effect. It also prevents future increases from taking place, eliminating local control from Iowa cities and counties. With the exception of Polk County, which was set to raise its minimum wage to $8.75 on April 1, three Iowa counties had already increased wage minimums: Johnson County to $10.10 an hour, Linn County to $8.25 and Wapello County to $8.20.

Not only does the bill reverse these increases, it even allows businesses to lower wages.

Iowa Citizens for Community Improvement organizer Bridget Fagan-Reidburn told WW, “We are outraged by our legislators’ continuous attack on workers — including lowering the minimum wage for close to 100,000 Iowa workers.”

These wage increases are a necessary minimum given the rising costs of living, as noted by the Iowa Policy Project. The statewide minimum wage of $7.25, which falls short of a living wage according to IPP, has not been increased since 2008.

Fagan-Reidburn said, “Because of the inaction at the Statehouse for the last nine years, supervisors in four counties saw the need in their communities and raised their local minimum wages.”

For months, Republican lawmakers called HF 295 a priority piece of legislation. It was supported by the Association of Business and Industry, the Iowa Restaurant Association and the Grocers’ Association, all of which, of course, stand to profit from such exploitation.

Despite their campaign rhetoric denouncing “big government,” the Iowa GOP supports big government when it furthers the interests of big business.

Iowa CCI, the Center for Worker Justice of Eastern Iowa, the Service Employees Union, the Iowa AFL-CIO and other groups are fighting against HF 295 and other anti-worker legislation.

Fagan-Reidburn said, “We will continue to fight for a minimum-wage increase to $15 per hour for all Iowans. We knew this would be a long-term fight, and we’ll continue to hold our politicians responsible to put people before profits and big-moneyed corporations.”