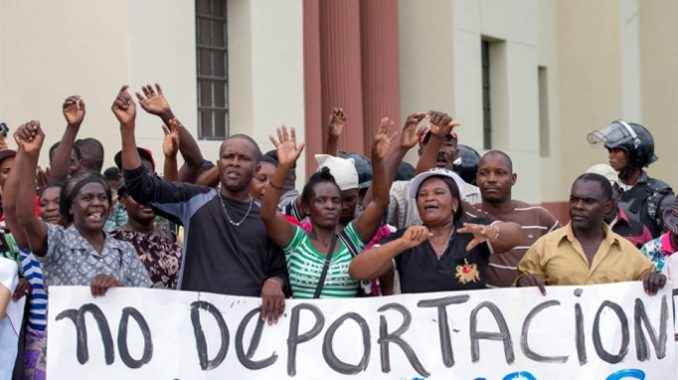 Homeland Security Secretary John Kelly will decide on May 23 whether to extend the “temporary protected status” of 50,000 Haitian refugees who came to the U.S. after the 2010 earthquake. The TPS for Haitians is set to expire on July 22.

Washington had granted Haitians TPS in 2010, less than two weeks after an earthquake devastated the Haitian capital, Port-au-Prince, leaving 200,000 to 400,000 Haitians dead and tens of thousands of homes destroyed.

Granting TPS is a declaration by the U.S. that conditions in a particular country are so life-threatening that Washington won’t send people back to that country and will let those immigrants legally live and work here. The TPS status usually lasts for 18 months; the declaration for Haitians has been repeatedly extended up to now.

The acting head of Citizenship and Immigration Services, James McCament, recommended to Secretary Kelly that the TPS should be removed for Haiti because “over all, circumstances in the country have continued on an upward trajectory since the 2010 earthquake.” (New York Times, April 30)

However, even the Times editorial recognized McCament’s statement as nonsense. In 2016, Hurricane Matthew devastated southwest Haiti, the country’s major food-producing area. It destroyed 175,000 homes, killed tens of thousands of livestock, wiped out crops and flattened plantations, many of which take years to become productive.

Before Hurricane Matthew hit, infected troops of the U.N. military occupation force called Minustah introduced cholera into Haiti. At least 10,000 Haitians have died of this disease and hundreds of thousands have been sickened.

The government’s recommendation to lift TPS for Haitians coincides with that to remove the TPS granted to Liberians, Guineans and Sierra Leoneans due to the 2014-16 Ebola epidemic in those countries. When taken together, these recommendations condemn the administration for obvious racism.

The uncertainty over Haitians’ status is causing a lot of anxiety in that community. Especially in New York, New Jersey and Florida, where many members of the Haitian diaspora live, there have been meetings where alternatives have been discussed. The weekly newspaper Haiti-Liberté covered one such “know your rights meeting” in its April 26 issue.

It has taken a while for a reaction to this deportation threat by the Trump administration to develop in the Haitian community. During his election campaign, Trump attempted to court Haitian support, since Haitians were aware of the great damage that Bill Clinton and Hillary Clinton’s actions had produced in Haiti.

Nana Brantuo, policy manager for the Black Alliance for Just Immigration, told the Bay View National Black Newspaper on April 26: “Considering the current Haitian migrant crisis on the U.S.-Mexico border along with the trials — post Hurricane Matthew — that continue to impede the progress of Haiti’s national development, stripping 50,000 Haitian nationals of TPS status prioritizes them for removal and raises major concerns around the readiness of Haiti to handle such a large number of deportees.”

While conditions in Port-au-Prince might have recovered to the same deplorable level where they were before the earthquake, southwest Haiti is still reeling from Hurricane Matthew. Haiti remains in crisis, and should not have to cope with 50,000 additional deportees expelled from the U.S.