The following announcement was sent to Workers World newspaper by Take Em Down NOLA in New Orleans, Louisiana. 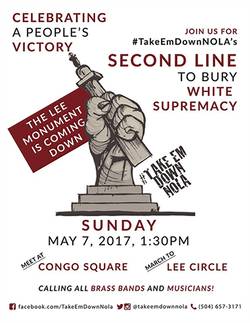 The whole country — in fact the world — is watching New Orleans.  While out-of-state Klan and Nazis flood the internet in an effort to intimidate people, Take Em Down NOLA is being flooded by support from the people of New Orleans. We put the onus on the mayor and police chief for allowing these vermin into our city.  Just as our elders and ancestors during the Civil Rights Movement were not intimidated, we are not intimidated. We doubt that many conventions, visitors, sports teams and celebrities will come here if city officials cave in to the racists..

Take Em Down NOLA is organized, disciplined, and prepared to carry out our constitutional right to have a mass “Second Line” that strongly stands up against racism and stands for social and economic equality.  The rich, white elite of New Orleans do not want a civil rights outpouring by the people — while they scheme to raise rents, displace folks, and segregate the city — at the same time they are exploiting the labor and culture of the Black community. Now the wealthy want the state legislature to rescue the monuments to white supremacy from the past and present.

The Second Line will feature enlarged photos of Rev. Avery Alexander, Alton Sterling, who was killed by police, and the students who toppled colonialist Cecil Rhodes’ statue at the University of Cape Town in South Africa.  The event will honor veteran Civil Rights heroes who have worked for six decades to see the monuments come down.

Don’t just study and praise history. Come and make history!  Be there: Sunday, May 7, at 1:30 p.m., at Congo Square in New Orleans.  Bring your signs, voices and friends.  For more information, see takeemdownnola.org.