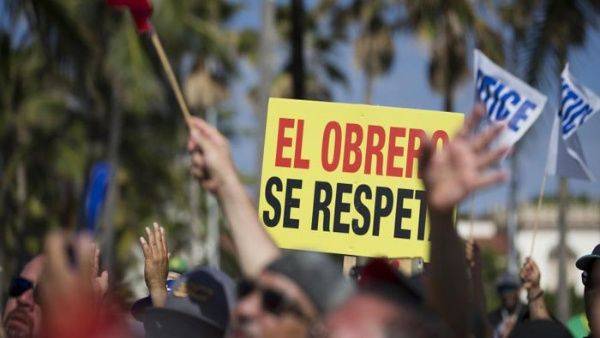 Even before International Workers’ Day — May Day — a very important advance had been made in Puerto Rico: unity in action. Trade unions and movements ranging from students, environment, women, LGBTQ and other sectors were actively promoting a National Strike on May 1.

Social organizations used all means at their disposal: social networks, radio announcements, awareness-raising demonstrations and concerts in shopping malls and other open spaces, street theater, stickers, distribution of informative flyers, painting on walls and more. Groups of young people came to offices employing many people to inform them of the danger threatening the country.

The general slogan was a call to the people: Join the struggle!

This May Day, Puerto Rico will not simply commemorate the Chicago martyrs. No! It will be a day to pick up the flag of struggle! Now at stake in the Puerto Rican archipelago is the very life of its people, and those people have decided to fight back. They refuse to allow their lives and the future of generations to be mere collateral in a commercial transaction. 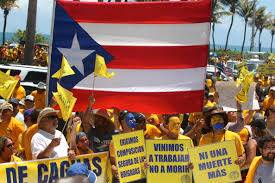 What is the struggle?

The fight is against a perfect storm of attacks at all levels against the working class. It is a struggle against the attempt of big capital to destroy Puerto Rico and rebuild it for capital’s benefit.

In 2016 the U.S. Congress passed the PROMESA Law (Puerto Rico Oversight, Management and Economic Stability Act), imposing an unelected Fiscal Control Board (referred to as the “Junta”) that automatically became the real, dictatorial government over Puerto Rico. The Junta has already implemented many measures outlined by the International Monetary Fund and contained in the 2015 Kruger Plan. Both the FCB/Junta and the Kruger Plan are the result of the capitalists’ interest in imposing austerity measures to ensure payment of an illegitimate and odious public debt of $74 billion.

The FCB counts on the unconditional collaboration of the current Puerto Rican government, under Gov. Ricardo Roselló, whose Partido Nuevo Progresista actively promotes statehood. Roselló is a colonial governor on his knees, submissive to the empire’s demands. A toothless legislature has endorsed all criminal measures coming from La Fortaleza, the governor’s palace, almost without amendments.

The PNP government presented a devastating Fiscal Plan to satisfy the appetite of the bondholders, and the FCB approved it. The government submitted the most destructive measures to the Puerto Rican Legislature for approval. The plan will significantly increase the people’s cost of living while cutting salaries and services. In other words, it’s the obscene strangulation of a people.

The legislature quickly passed the measures without a public hearing, behind closed doors. The first law was the 2017 privatizing Act No. 1, designed to amend the Public-Private Partnerships Act. According to economist Argeo Quiñones, “the concept of PPPA in Puerto Rico has been distorted.” (cb.pr, Feb. 10)

Instead of being a union of efforts between the public and the private sectors, PPPA allows the sale of profitable public properties so private capital can grab windfall profits in the millions. Profitable public possessions are being bankrupted and sold “at firesale prices.” (cb.pr, Feb. 10)

The legislature also approved ”labor reform” through the Law of Transformation and Labor Flexibilization (Act No. 4 of 2017), under the pretext of stimulating the economy. This law affects new workers in the private sector, pitting them against current workers. As its name gloomily indicates, the law represents a loss of rights workers had won, such as the eight-hour day, one of the achievements commemorated on May Day. For new workers, the law cuts wages, vacation and sick days; allows less time to claim compensation after dismissal; reduces the Christmas bonus; and extends workers’ probation period.

Also passed was the Single Employer’s Law (Act No. 8), affecting the public sector. This establishes the government as a single employer with “flexibility” to move workers from one agency to another, even to the private sector. Workers who are moved would lose protections won under collective bargaining agreements, as well as their accumulated employment time.

The final blow was passed April 27: the Law of Compliance with the Fiscal Plan of the Government. Losses to the working class include: disregard of collective bargaining agreements; limiting holidays to 15; loss of payment for sick days or unused holidays; no paid overtime; immunity of government officials and bosses from damages; reassignment of employees without prior consultation.

While the FCB cut income for the whole working class, it imposed more taxes in all categories: sales, services, permit applications, etc. Traffic fines will increase by 70 percent and tolls increase. Subsidies for municipalities are cut or suspended, a highly detrimental measure because municipalities care directly for the needs of the residents. Allocations will be lost for various programs, from art, culture and sports to security and programs for the protection of women.

Other cuts include $1 billion from health care, reduction of pensions by 10 percent and closure of hundreds of schools. A cut of more than $600 million is imposed on the budget of the only public university, the University of ­Puerto Rico.

This institution, with 11 campuses throughout the island, is public and therefore offers the poorest sectors of the population the opportunity to obtain quality education at low cost. It also contributes to Puerto Rican cultural development as a center of democratic debates on various topics. It’s a source of economic growth in small cities. Unlike private universities, it contributes to Puerto Rico’s development by preparing professionals oriented to serving the needs of the country, not enhancing their “market value.”

UPR is a research center that serves not only Puerto Rico but various agencies in the U.S. For example, many UPR graduates are actively recruited by NASA. The UPR is the very future of the country, and its destruction would devastate the country. 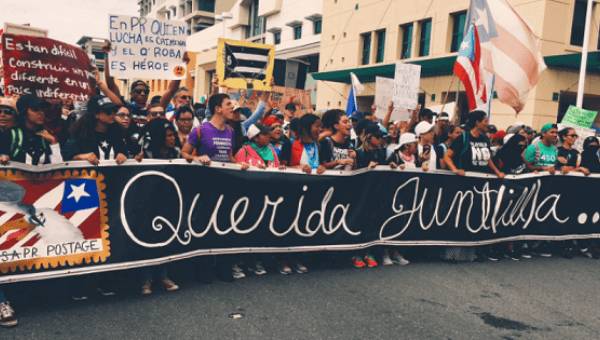 Students and faculty of the UPR understand their university’s importance. The Río Piedras Campus — the largest one — has been on indefinite strike since March 28. Democratic assemblies have been held in which up to 10,000 students have participated. Now eight of the 11 other campuses have joined the strike — a continual mobilization that has attracted the support of the Puerto Rican Association of University Teachers (APPU), other unions and multiple social organizations.

The students are struggling not only for public education. They are struggling for the entire people and against the FCB/Junta and the destructive measures driven by the government. The students demand the debt be audited, which the government and the FCB have prevented, even going so far as eliminating the Board for the Independent Integral Audit.

“Audit the debt” has become the battle cry, as the debt is known to have been contracted by corrupt means. Both Puerto Rican electoral parties, alternating in government, have been guilty, along with U.S. banks and financial agencies such as Santander, Wells Fargo, UBS and others. The original plan to establish the FCB was presented under the previous administration, the Partido Popular Democrático.

The government accuses the demonstrators of being “delinquents.” The students respond by saying, “We are citizens, not criminals.” The government has stepped up repressive measures, appointing Hector Pesquera, a former Puerto Rican police chief who worked for more than 25 years at the FBI, as head of a new Department of Homeland Security. The government knows very well that nefarious measures which strangle the people will arouse great opposition, not just from students, and is preparing to criminalize protest.

As the archipelago of Puerto Rico is emptied of its most valuable resources, huge tax-exempt incentives encourage U.S. millionaires to move there. Meanwhile, cuts are said to be necessary, yet millions are available for “consulting.” U.S. “experts” are recruited to “restructure” the island. Roselló appointed Julia Keleher, a Philadelphia-based consultant, as Secretary of Education, with a salary of more than $120,000 for six months. Another person brought from the U.S., Andrea Bonime Blanc, is paid $750 an hour as the FCB ethics officer! 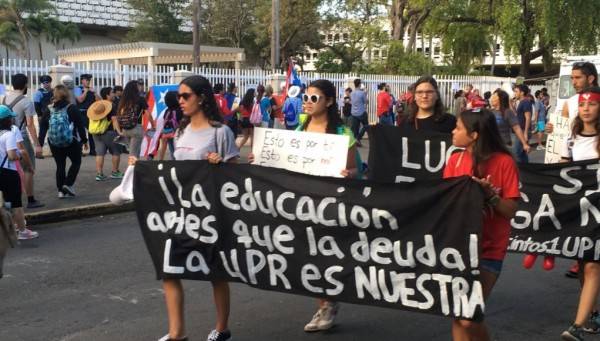 What role for Puerto Rico?

Why use these attacks to destroy Puerto Rico at this particular time? As a colony, Puerto Rico has served the empire’s interests and needs as they evolved. Geographically, Puerto Rico’s location has been useful to U.S. military interests. The island has also served as a huge sugar plantation and a center for pharmaceutical production, oil refineries and technology. Now, when capitalism is in its declining phase, what role will Puerto Rico be forced to play?

In response to this question, Luis Pedraza Leduc, of the Union Coordinator and ProSol UTIER (UTIER Solidarity Project), offered this analysis to Workers World-Mundo Obrero:

“I believe that the debt issue was used to one, effectively cash in on and two, to restructure the government through a giant project to privatize energy, water, roads and land.This project in the Caribbean is part of U.S. political interest in a nearby market, which also involves their interest in Venezuela and Cuba.

“I believe that the economic model does not necessarily need a colonial government, but rather the penetration of capital in various forms: PPPs (Public-Private Partnerships), loans, bonds, technical advice and opening markets to capital. Puerto Rico will be the showcase of capitalism.”

When the attack is so monumental, that is not the time to go on the defensive and answer one attack at a time.

It is time to go on the offensive so that the people decide. And when there is an attempt to criminalize the Resistance, it is necessary to expose, stronger than ever, U.S. crimes against the Puerto Rican people.

Unite our forces! And as our national hero, Don Rafael Cancel Miranda, says, “We will reach the goal sooner on our feet than on our knees.”

Active solidarity for the Boricua People in struggle!

Audit the debt and jail the guilty!

No to repression of the movement!