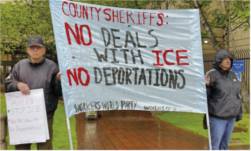 As part of an ongoing campaign against Alameda County Sheriff Gregory J. Ahern, and in support of the struggle against deportations, Workers World Party held a picket line in front of Glen Dyer Jail in downtown Oakland, Calif., on Monday, April 17, demanding Ahern stop cooperating with the federal Immigration and Customs Enforcement agency.

Ahern not only continues to cooperate with ICE by notifying them about prisoner releases, but he is also the head of the California Sheriffs’ Association, which promotes the same practices. He even signed a letter as the head of its political action committee to support the nomination of arch-racist Jeff Sessions for U.S. attorney general.

Organizers vow to keep the pressure on Ahern to stop cooperating with ICE. This demonstration was held on the same day that the Caravan Against Fear held a protest against Los Angeles County Sheriff Jim McDonnell.