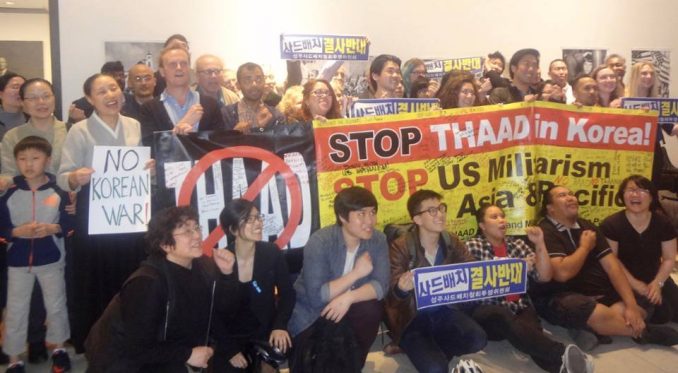 A larger than expected crowd of 75 people attended a Philadelphia meeting on April 11 about the south Korean movement against the deployment of Terminal High Altitude Area Defense, a new U.S. missile system. Speakers were the Rev. Sounghey Kim, of the Seongju Residents Committee to Stop THAAD, and Hyun Lee, of the Solidarity Committee for Democracy and Peace in Korea. Lee is also on the editorial team of Zoom in Korea, an online media site that provides updates and critical analysis of news related to the Korean peninsula.

The U.S. and south Korean governments are trying to deploy the THAAD missile system in south Korea despite daily protests against it by villagers in Seongju and Gimcheon whose farms, homes and livelihoods are endangered. Expert opinion is that the system will probably not work, and may have potentially dangerous radiation impact. Political activists say rather than a defensive weapon, it is an offensive one aimed against the People’s Republic of China.

The meeting was part of a tour April 4-17 that included meetings in Berkeley/Oakland and Los Angeles, Calif.; Huntsville, Ala.; Boston; Rutgers University in New Jersey; Washington, D.C.; and Fairfax, Va. The tension at later meetings was heightened by awareness that the Pentagon had sent a battle group to the sea off Korea, which included missile-armed ­destroyers and an aircraft carrier.

A meeting with the same agenda and main speakers took place April 13 at New York University in New York City, filling an auditorium there. Videos showed the determination of the people of south Korea and presented a talk by Massachusetts Institute of Technology’s military analyst Theodore Postol. Not only did he outline the military weaknesses of the THAAD system, but he confirmed that the missile system is aimed at China.