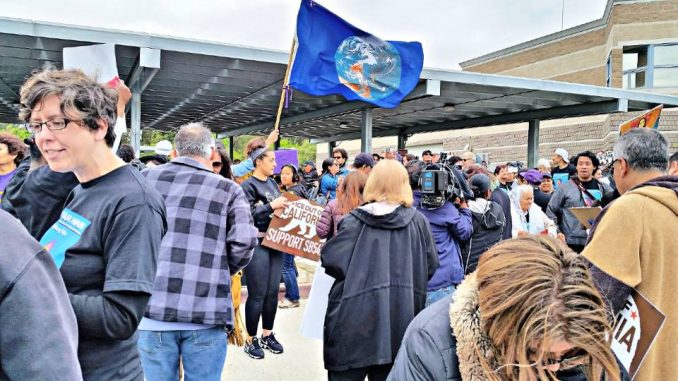 More than 100 people traveled to the remotely located Richmond, Calif., Immigration and Customs Enforcement Detention Center on April 11 to support the Caravan Against Fear’s California tour. Calling on everyone to “stand up for immigrant rights,” they demanded that ICE “stop separating our families,” “Free Yazmin” and “ICE out of California!” They also called on state legislators to vote yes on SB 54, which would make California a sanctuary state.

Yazmin Liliana Elias Obregon, a single mother of three U.S. citizen children and a local focus of the demand against “separating our families,” has been detained at West County Detention Center in Richmond for more than a year. (For more information on her case, visit theiyc.org/free-yazz/.)

The caravan states: “We’re mobilizing because fear is spreading throughout the U.S. and being used as a tool to promote white supremacy, terrorize communities and break apart families. We believe that defiant protest, coupled with acts of mutual aid, trust and understanding across communities, are vital to combating fear, repelling Trump’s attacks on our freedoms and families, and building a lasting civic offensive to defend immigrants and defeat the hate-filled plans of the Trump administration.”

The caravan is sponsored by labor, community, human rights, religious, civic, environmental and other organizations in both the U.S. and Mexico, including the Southern Border Communities Coalition, Rompeviento Television and dozens of other local organizations joined in a diverse and growing coalition of resistance.