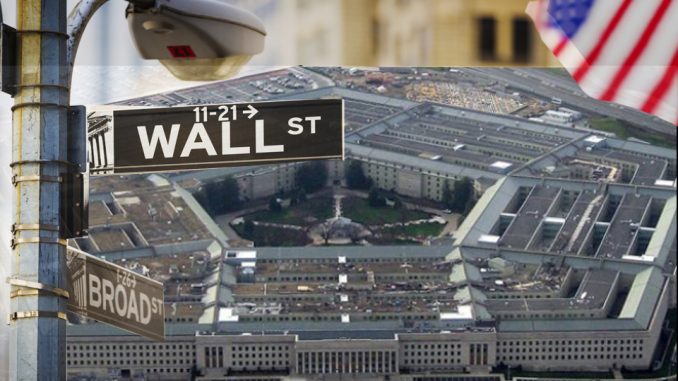 There has been much buzz in the capitalist media recently about Donald Trump’s “flip-flopping.” He has changed his positions 180 degrees on a whole variety of issues within a few weeks’ time.

Among the issues on which he has switched are:

These are just a few of his reversals. They have all brought him more in line with the fundamental needs of U.S. imperialism.

Numerous explanations for Trump’s reversals have been put forward by the big-business media. For example, it is said that Trump adopts the position of the last person he has talked to. Or, Trump has no ideology and he can shift positions easily. Or, he listens to his daughter Ivanka Trump and her husband Jared Kushner. And so on.

All of these things may be true. But they mask the deeper reason for the so-called flip-flops.

Trump has been leaned on by the Pentagon and Wall Street to shift from demagogy to policy based on the reality of the core needs of U.S. imperialism.

Trump is surrounded by four generals, three former bankers from Goldman Sachs and other financiers, not to mention Rex Tillerson, former CEO of ExxonMobil, the largest private oil company in the capitalist world. This is a veritable coalition of Wall Street, the Pentagon and big business. And, for the moment, they have reined in Trump and subordinated him to their needs. Whether he will stay in harness remains to be seen.

Trump removed ultra-rightist Steve Bannon from the Principals Committee of the National Security Council, thus bowing to the pressure of the Wall Street-Pentagon coalition, led in this instance by Lt. Gen. H.R. McMaster, his national security adviser. In doing so, he denied that Bannon had been his strategist. “I’m my own strategist,” declared Trump.

The problem with that statement is that Trump does not have a strategic cell in his brain. He can’t think politically beyond what he said yesterday.

Trump’s previous positions have been the result of blustering election demagogy. He has uttered positions that no serious imperialist politician could possibly follow through on. The applause lines that gratified his ego and won over gullible voters during the election campaign have now clashed with the hard realities of the problems of U.S. imperialism at home and abroad. However, Trump is so dense and so vain that he clung to these positions for dear life. Finally, he had to be put straight by the capitalist establishment.

Take Trump’s belligerent, war-like posture toward the Democratic People’s Republic of Korea. Trump tweeted recently about the DPRK and its drive to obtain an intercontinental ballistic missile that can be armed with an atomic warhead.

“That’s not going to happen,” tweeted Trump. In another tweet Trump said the DPRK is “looking for trouble” and he warned that “if China decides to help, that would be great. If not, we will solve the problem without them.” (New York Times, April 17)

These were clear threats to use force against the DPRK. To underscore the threat, the Pentagon sent an aircraft carrier squadron, accompanied by Aegis missile ships, off the coast of the Korean peninsula. Washington made vague but menacing threats to “take action” if the DPRK carried out a nuclear test.

Trump — and Obama before him — has adamantly refused any negotiations with the DPRK unless it shows signs that it will give up its nuclear weapons program.

But listen to National Security Adviser McMaster speaking on a recent Sunday talk show: “It’s really the consensus with the president, our key allies in the regions … that this problem is coming to a head,” said the general. “And so it’s time for us to undertake all actions we can, short of a military option, to try to resolve this peacefully.” (ABC News This Week, April 16)

Take the position put forward by Vice President Mike Pence while visiting the demilitarized zone in south Korea on April 17. According to the New York Times, Pence blustered that north Korea should not test “the strength of the armed forces of the United States in this region.” Yet he also noted that Washington was seeking security “through peaceable means, through negotiations.”

Whether or not the peaceful language of McMaster and Pence was meant as a gesture to China without expressing real White House policy remains to be seen.

But the socialist government of the DPRK did precisely what Pence warned against. The government of Kim Jong Un defied all the blustering war-mongering of the Trump White House and the Pentagon, proudly staging a massive military parade on the 105th birthday of the founder of the DPRK, Kim Il Sung, complete with an array of  intercontinental ballistic missiles.

Pyongyang stands up to Trump and Pentagon

The DPRK stood up to military threats and the presence of a U.S. naval armada in its waters. The leadership has taken into consideration the lessons of Iraq and Libya. The U.S. imperialists used the pretext of looking for weapons of mass destruction in Iraq to plan a massive attack, which ended in the murder of Iraqi President Saddam Hussein. The DPRK is also well aware of the lesson of Libya, whose leader Moammar al-Gadhafi gave up his nuclear program; Libya was later invaded and he was brutally murdered by pro-U.S. forces.

This also speaks to the fraudulent slogan of a “denuclearized Korean peninsula,” which Washington and its allies are always promoting. The only nuclear weapons actually on the Korean peninsula belong to the DPRK. The U.S. does not need nuclear weapons in south Korea. The Pentagon has surrounded the DPRK with a “ring of fire,” including nuclear-armed submarines, nuclear-armed planes on aircraft carriers and nuclear-capable bombers at bases from Japan to Guam to Hawaii, as well as island bases throughout the region. A “denuclearized peninsula” means a disarmed DPRK.

So Trump’s flip-flop on the DPRK, as espoused by McMaster and Pence, is rooted in hard military reality. Trump tweeted that the U.S. would “deal with” the DPRK. But the military explained to him that there is no good option for U.S. imperialism in north Korea so long as Pyongyang remains steadfast in the face of nuclear blackmail.

Trump has publicly declared that the Chinese government is going to “help on north Korea,” so he pulled back from naming China as a currency manipulator. Such a declaration was part of his anti-China campaign. He also promised to slap tariffs on Chinese goods sold in this country. This was when he was preaching to his followers about how China was “stealing jobs” and “cheating on trade.”

The truth is that he has been forced to reject his own and Bannon’s anti-China line by financiers like Gary Cohn, head of Trump’s National Economic Council and president and CEO of Goldman Sachs for 10 years. Cohn and his Goldman Sachs cohorts, Deputy National Security Adviser Dina Powell and Treasury Secretary Steve Mnuchin, have also explained to him that Janet Yellen, head of the Federal Reserve Board, is a favorite of Wall Street. She has funnelled billions of dollars to the banks, allegedly to “save the economy.”

Said Reuters on April 16: “Apparently paying more heed to Cohn and other moderates on his team, Trump last week said he was open to reappointing Janet Yellen as Federal Reserve chairman when her term is up and he also held back from naming China a currency manipulator.

“Both stances marked a reversal from his campaign when Trump criticized Yellen and vowed to label China a currency manipulator on ‘day one’ of his administration, a move that could lead to punitive duties on Chinese goods.

“Chinese authorities, faced with an insult from a foreign leader as the ruling Communist Party prepares for elections of top positions later this year, eventually would have slapped steep retaliatory tariffs on U.S. exporters that send more than $100 billion a year of goods to the Asian country. U.S. manufacturers’ profits and stock prices would take a big hit.”

The designation of Cohn from Goldman Sachs as a “moderate” paints him with a kindly brush. Finance capital in general, and Goldman Sachs in particular, is just as aggressive and ruthless in pursuit of profit as the Pentagon is in pursuit of conquest. They are two adventurist arms of the same ruling class.

Cohn, meaning Goldman Sachs, told Trump it would not be a good idea to start a trade war or a currency war with the second-largest economy on earth. The Chinese economy is growing at an annual rate of 6.9 percent, while U.S. capitalism can barely eke out 2 percent growth.

As for China helping the U.S. on “taming” the DPRK, it is worthwhile noting that for the Chinese People’s Liberation Army, it is impossible to ignore the contrast between south and north Korea.

The north is not threatening China militarily one bit. But the south Korean puppets of U.S. imperialism are enthusiastically and hastily rushing to deploy the Pentagon’s THAAD anti-missile system. THAAD has powerful radar that can reach into China and spy on Chinese missile installations. The Chinese government has vigorously warned against this deployment and has said it would upset the “strategic balance” in the region. Seoul and Washington have ignored China’s concerns.

In Beijing the military and the political high command must be truly worrying about the possibility of having a pro-imperialist regime on their border. In the long run, China cannot afford to undermine the DPRK. It will be compelled to resist U.S. aggression against the government of Kim Jong Un.

The crisis in Korea, like the economic and geopolitical crises for U.S. imperialism around the globe, cannot be tweeted away nor can they be overcome by military means. U.S. imperialism is a colossus with feet of clay. Trump is finding that out the hard way.

Goldstein is author of Low-Wage Capitalism: Colossus with Feet of Clay and Capitalism at a Dead End, available from all major booksellers.