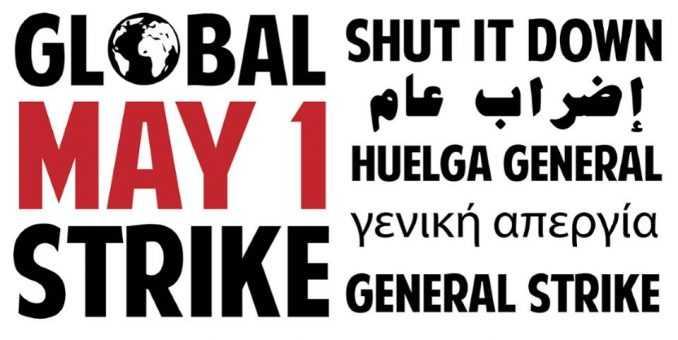 The world is reverberating with militant calls for a mass, general strike on May Day — International Workers’ Day on May 1. People are rising up because, as the Black poet June Jordan said, we know “we are the ones we have been waiting for.”

Only the people can stop the forces of far-right extremism and of late-stage capitalism wreaking worldwide havoc.

In the U.S., voices are being raised for a May Day strike by all sectors and communities of workers and oppressed people. The cry is coming not just from unionized workers, but from all of us being targeted.

Mass militant May Day actions are being called by groups of people of color, migrants and immigrants, temp and low-wage workers, unemployed and underemployed, LGBTQ+ people, prisoners, women working inside and outside the home, young people and students, people with disabilities who are working or want to and are denied the chance, people who are losing health care and environmental protection, and so much more.

On May Day we can unite to defend ourselves and all those under direct, immediate attack. We can assemble as a revolutionary united front against neofascism, capitalism and imperialist war!

Become part of this powerful fightback! Come out wherever you are for May 1 strike actions happening coast to coast.

Just a few of the marches and rallies include:

Roanoke, Va.
No Borders in the Workers Struggle! May 1
Melrose Park: 3 p.m.

Visit peoplespowerassemblies.org/may-day-2017 for updates and information.