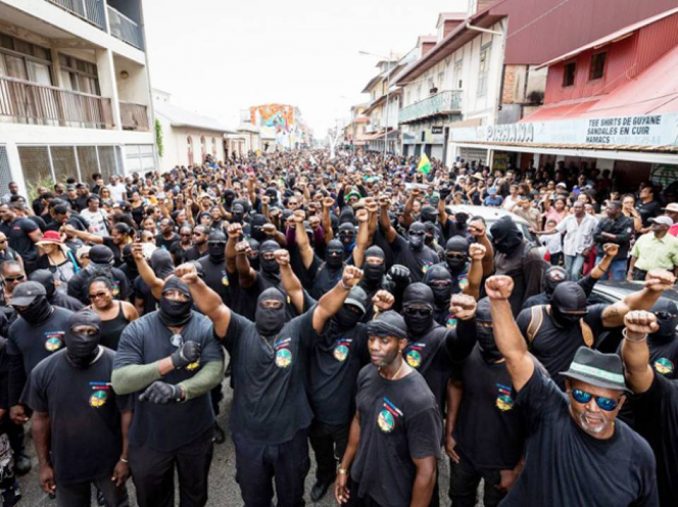 The French government has said openly that it won’t make any real concessions to the demands of those on general strike in Guiana, a territory on the northern coast of South America, whose quarter-million population is legally French. Prime Minister Bernard Cazeneuve claimed that the demands of the coalition Pou LaGwiyann Dékolé (Let Guiana Take Off) guiding the struggle are “unrealistic.”

The PLGD, together with the trade union movement, wants recognition of special status for French Guiana and 2.5 billion euros in emergency aid delivered immediately, before a new French government takes over in mid-May.

It appears that the general strike, which began March 27, will continue indefinitely. While the PLGD relaxed the roadblocks on April 9, it issued an order saying that all traffic — truck, auto, bike, foot — would be restricted starting Monday morning, April 10.

Earlier on April 6, the PLGD held a press conference in Cayenne, the capital, where each of the coalition’s various components — health, education, transportation, civil society — expressed their particular demands and pledged to continue the strike until all were satisfied.

On April 8, French Guiana’s authorities tried to hold a meeting about resolving the strike without any PLGD representatives being present. Members of 500 Brothers, a people’s militia active in the PLGD, tried to force their way in.

A physical confrontation occurred for the first time during the current strike. The cops’ second in command wound up in the hospital. The cops fired tear gas canisters, which were thrown back at them.

After the confrontation died down, people brought out hammocks and chairs onto the lawn of the government building and stayed the night, showing everyone that the struggle was far from over.