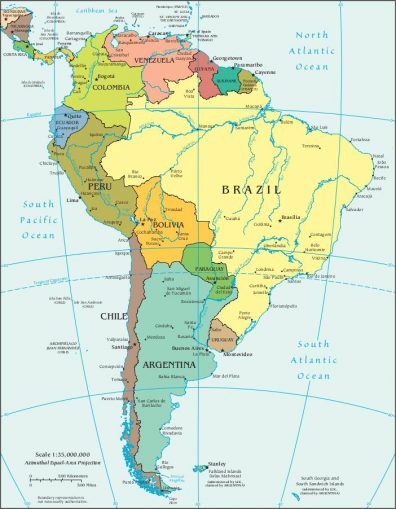 Latin America is in the crosshairs of imperialism, which is trying to halt and even reverse the progressive developments that have taken place in recent years in many of the region’s countries.

These developments were brought about through electoral processes. They don’t reflect the construction of society on a socialist foundation, but they have improved the overall quality of life of the poorest people, while leaving the capitalist system intact. Nevertheless, because they transferred a significant part of state budgets towards improving the health, education, housing, pensions and other programs of great assistance to the people, instead of increasing the private wealth of the capitalists, the new developments present an obstacle to both the national and foreign capitalist class.

Here we must clarify, however, that when the price of some national commodity — such as oil — in the world market was high, the national bourgeoisie, in Brazil, for example, also benefited from the state economic policies.

These policies also sent an important anti-imperialist message of solidarity with the peoples of the region and the world.

But its hostile approach to progressive governments is nothing new for the capitalist class. However, now that capitalism is in a stage of decay, it is taking a more desperate form and is trying to reverse these developments. It is trying to recover its dominant position at the expense of the working class, by taking away benefits previously acquired, increasing the cost of living, etc. Imperialism is “going for broke,” and this includes shutting down the governments that came into office through popular uprisings in the region.

The development of events there also reflects the enormous challenge of establishing progressive measures that benefit the most deprived masses through electoral processes within the framework of a capitalist state without, however, overturning the capitalist social relations.

Lacking a system in which the proletariat truly appropriates and directs the means of production, these governments face the possibility that a few votes — purchased or obtained by deception — can decide the future and smash the achievements obtained for the impoverished class.

We can see this clearly in Argentina under President Mauricio Macri, where thousands of jobs have been lost since his election and social programs greatly reduced, including one that benefits women in a country where one woman is killed every 30 hours!

Other examples in the region where anti-people governments recently have taken office is in Peru, and in Brazil with the illegitimate deposing of Dilma Rouseff’s presidency.

The electoral victory of Lenín Moreno of Alianza PAIS in Ecuador on April 2, on the other hand, served as an encouragement to the peoples of the region and the world. It was a message of defiance in the face of the wave of imperialist attacks.  In defeating the banker Guillermo Lasso — who represents the neoliberal agenda — Lenín Moreno safeguarded the Citizens Revolution that under the leadership of Rafael Correa brought about the stabilization of the country and greatly improved the lives of all Ecuadorians.

This election has been followed with great attention, particularly by Latin American observers. Some, like Atilio Borón on his blog (www.atilioboron.com.ar), have even described it as “the Latin American Battle of Stalingrad,” because the future of Ecuador and Latin America depends upon its outcome. [“Stalingrad” refers to the Soviet Red Army’s heroic defeat of Nazi Germany’s army in 1943, which changed the course of World War II.]

Recent events in Venezuela and Paraguay illustrate the role the corporate media play as accomplices to the imperialist onslaught.

In Venezuela, the National Assembly (NA), after falling into the hands of the opposition party majority in December 2015, has tried by different means to destabilize the government of President Nicolás Maduro in order to overthrow the Bolivarian Revolution.

The opposition tried to get a two-thirds majority to increase their powers and allow them to repeal essential laws with which they disagree, such as the laws addressing labor and education. To that end, the NA swore in three deputies from the opposition Table of Democratic Unity (MUD) coalition from the state of Amazonas, even though these three elections were being challenged because of factual evidence of fraud.

In January 2016, the Constitutional Chamber of the Supreme Tribunal of Justice (STJ) declared the NA to be in contempt, annulling any provision the NA issues until the disputed delegates in question are removed and new assembly elections are called, something that the NA has not yet resolved.

An impasse arose recently when the Venezuelan Petroleum Corporation S.A. requested an appeal for interpretation of the Hydrocarbons Organic Law regarding mixed companies. This decision requires approval by the NA. Acting in accord with the Venezuelan Constitution, the STJ maintained the contempt order and temporarily assumed the functions of the NA.

This action provoked a situation where the opposition right wing, with its allies in the Organization of American States (OAS) and in the U.S., described as a coup d’état carried out by the government, an “auto coup d’état.” Luis Almagro, secretary general of the OAS, sought to impose the OAS Democratic Charter against Venezuela. At the same time, Henrique Capriles — former presidential candidate for the Venezuelan right-wing opposition — was sent to the U.S to obtain an OAS-U.S. intervention against his country.

The international corporate media have elevated this campaign against an alleged coup to the maximum. Mexico and the U.S. have led the campaign in the OAS — through the reactionary Luis Almagro — trying to accumulate forces against the Bolivarian Revolution. On the morning of April 3, however, Bolivia, which heads the Permanent Council of the OAS (PC-OAS), suspended the extraordinary session that the group of 20 countries allied with the U.S. wanted to convoke against Venezuela, until more information is gathered.

The PC-OAS, however, met without the presence of Bolivia and Haiti, the holders of the presidency and vice presidency of the body at the time, in an action meant to illegitimately impose the Democratic Charter and justify a foreign intervention in Venezuela.

Both the Bolivarian government and its allies in the region have rejected such an intervention.

This OAS action emboldened the right-wing opposition in Venezuela, which, in an effort to cause destabilization, took to the streets in a violent way, setting roadblocks on fire and damaging government buildings. In the course of these demonstrations, one person was killed.

The leaders of the violence were persons, mostly young, subcontracted and paid by the opposition party Primero Justicia to commit terrorist acts. Several of them have been caught and are awaiting trial.

The Chavista forces have also been on the streets in defense of the Bolivarian Revolution and their president, Nicolás Maduro.

It is important to emphasize that a deliberative process took place after the STJ decision, effectively striking down the NA’s prohibition. The purpose of the initial decision was to guarantee the rule of law, but after a disagreement between two major government branches, a special meeting was convened by President Maduro to resolve the issue.

The impasse happened after the national prosecutor, Luisa Ortega, a pro-government official, publicly opposed the STJ’s decision on the grounds of an interpretation of a section of the Bolivarian Constitution. President Maduro then convened an emergency meeting of the Council for the Defense of the Nation. This council is the highest body of consultation for planning and advising the Public Powers in matters related to the integral defense of the nation.

While this development was taking place, on March 31 in Paraguay, there occurred what can be described as a real coup. Behind closed doors, outside of the people’s view, the right-wing president Horacio Cartes and the deposed ex-president Fernando Lugo — who once was considered progressive and even leftist — shamelessly signed an agreement to amend the Constitution to approve the presidential re-election. This was endorsed by Lugo’s Guasú Front, which in the past was also considered progressive.

When the people found out what had happened, they took to the streets against this corrupt political class, shouting the slogan, “Get all of them out!” Thousands of peasants demanded agrarian reform and young people of different social strata also turned out by the thousands against the ruling class and their lying politicians. They demand the withdrawal of the leaders and raise the need for a new constitution.

Demonstrations spread throughout the country. In Asunción — the capital — as a clear message, people burned part of the Congress facilities.

The police responded violently, shooting at demonstrators and killing one young man with a shot to the head.

Both the Venezuelan and the Paraguayan people are demonstrating at this moment that despite the right-wing national and foreign assault, the people will not stop until they are finally able to determine their future.