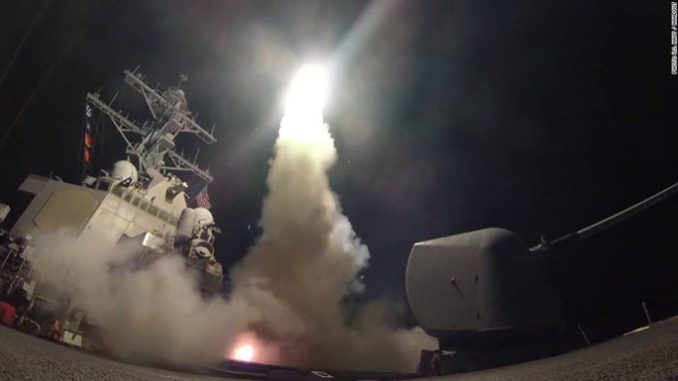 Within a day of the U.S. missile strike on Syria, five major U.S. newspapers — the New York Times, the Washington Post, USA Today, the Wall Street Journal and the New York Daily News — published a total of 18 opinion pieces in support of Trump’s action and zero in opposition, according to a Fairness & Accuracy in Reporting (FAIR) article on April 7.

Up to that point, all these corporate daily newspapers had regularly published articles critical of Trump’s actions. However, after Trump ordered a missile attack on Syria, the monopoly press quickly fell into line and praised him.

Television news followed the same pattern as the press.

Anyone around and paying attention at the opening of wars against Vietnam, Iraq (twice), Yugoslavia, Afghanistan and Libya, will remember that the corporate media gave exactly the same type of unanimous support for U.S. attacks, whatever the pretext.

The Pentagon — which now has four generals in Trump’s gang — launched 59 cruise missiles at a Syrian Army facility in the Homs province. According to the governor of Homs, at least seven civilians were killed and nine were wounded.

Trump ordered the missile launch on April 6. He claimed it was because of an alleged Syrian government-led chemical attack a couple of days before.

The U.S. missiles were launched without investigation or proof. Only groups like the White Helmets, an al-Qaida-affiliated, pro-U.S. intervention propaganda firm (tinyurl.com/m48792r) and the so-called Syrian Observatory for Human Rights, a major pro-interventionist operation run by one individual in Britain, claimed they had witnesses.

The racist, warmongering propaganda campaign against Russia, Iran and Syria has been central, not only to the corporate media, but also to the “anti-Trump” rhetoric of liberal and pseudo-left-wing media outlets since the Democratic National Committee originally blamed the Russian government for costing Hillary Clinton the election.

The alleged use of chemical weapons by the Syrian army, just like the accusations of Russian influences, has been parroted by the capitalist press without any hint of substantiation or independent verification. Included in the pro-interventionist media are renewed calls for the Trump administration to implement a “no-fly zone.”

While these media outlets may have opposed Trump’s previous actions in rhetoric and even intention, they remain essential propaganda organs for the ruling class, including the Democratic Party and the neoliberal wing of Wall Street. Their “opposition” to Trump is a desperate effort to save the Democratic Party and dying capitalism; it has nothing to do with anti-racism or anti-imperialism.

From the beginning of Trump’s campaign, the Democrats and the anti-Trump corporate media have attacked Trump from the right, calling him too critical of NATO, too soft on Putin. The truth is, no matter who is in the White House, U.S. imperialism will continue to orient toward wars of conquest. Trump’s “anti-war” populist rhetoric was demagogy to drum up support for his reactionary agenda.

Now that Trump has openly attacked the Syrian government and Bashar al-Assad, Trump’s ruling-class “opposition” calls him “real president material” and all the bourgeois media march in lockstep with the war drive.