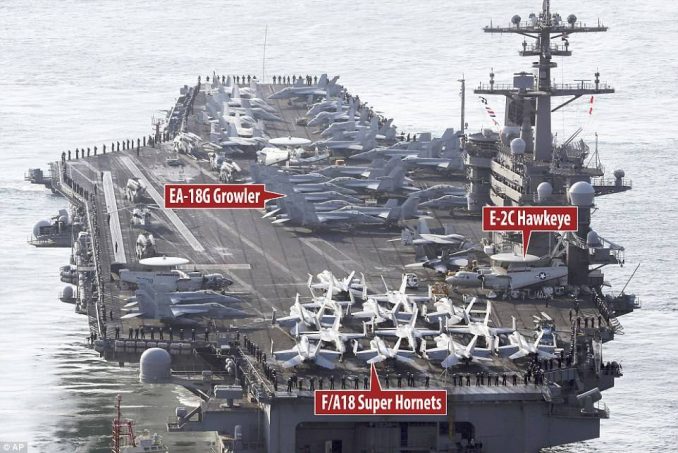 The nuclear-powered USS Carl Vinson carrying huge fleet of fighter jets arrives in South Korea. More than 80 aircraft, including the fighter aircraft F/A-18F Super Hornet, the E-2C Hawkeye and the carrier-based EA-18G Growler are on board the super carrier.

April 9 — Yesterday, the Pentagon rerouted the aircraft carrier Carl Vinson, along with three guided-missile destroyers and cruisers headed to Australia, and ordered them instead to waters off the Korean peninsula.

The redeployment of the warships comes one week after the conclusion of a monthlong, massive military exercise, called Foal Eagle by the Pentagon, that involved some 30,000 troops from the U.S. and up to 300,000 from south Korea in a simulated invasion of the Democratic People’s Republic of Korea (north Korea). It’s openly stated goal was to rehearse the destruction of the north Korean government — in other words, “regime change.”

This is the kind of intense military pressure U.S. imperialism has exerted on the leaders of the DPRK ever since a revolutionary guerrilla army there liberated the northern half of Korea from Japanese colonial rule at the end of World War II.

Korea, which traces its history back 5,000 years, has been divided ever since 1945 by the U.S. military occupation of the south.

From 1950 to 1953, the U.S. imperialists tried to destroy the socialist government in the north, sending almost 6 million U.S. soldiers and dropping more bombs on Korea than it had in the entire war against Japan. The Koreans took terrible losses, but they fought the U.S. to a standstill — the first country to ever do so.

Now, Washington is talking once again of a war on Korea. The excuse? The DPRK has been arming itself with nuclear weapons and missiles — precisely in order to ward off another U.S. attack.

The lessons of the last 15 years have not been lost on the Koreans. They have seen how the U.S. has targeted country after country for “regime change,” making phony allegations in order to cover its totally illegal aggressions.

Remember the claims that Iraq had “weapons of mass destruction” leading up to the U.S. invasion and takeover of that country? Total lies, as even the politicians here have had to admit. The same was true of Libya, once the most prosperous country in Africa and today in ruins. And Yugoslavia, torn into small states because it didn’t have the weapons to defend itself.

Now Syria is the target, and the Trump administration just broke international law by firing cruise missiles into that country with no warning, no evidence for its claims that Syria had attacked its own people with nerve gas, no chance for an investigation and not even a fig leaf authorization from Congress to launch a military attack.

The Koreans are determined not to let what has happened to these countries happen to them. If anyone has a right to nuclear weapons, it is the DPRK. After what the U.S. did to them in the 1950s, they would be foolish indeed not to arm themselves against another devastating war.

They have seen the U.S. just complete the installation of an anti-missile system in the south of Korea that is touted as a “defensive” measure, but is in fact another sign that the Pentagon wants to be able to attack the north without the DPRK being able to retaliate.

The people of south Korea realize the dangers inherent in the Terminal High Altitude Area Defense (THAAD) anti-missile system and have been demonstrating every day against it.

What imperialism is afraid of

What are the U.S. imperialists really afraid of? It is that the people of both north and south Korea are moving to overcome the pressures from abroad that have divided them.

Right now, the former president of south Korea, Park Geun-hye, is sitting in a jail cell after massive demonstrations by millions of south Koreans succeeded in having her impeached and removed from office for taking bribes from south Korea’s biggest corporations. She is the daughter of an earlier president, Gen. Park Chung-hye, who seized power through a military coup. They both have had the blessings of the U.S. occupiers while earning the hatred of the people, especially the working class.

In one month, south Korea is slated to hold an election for a new president, and the front runner, Moon Jae-in, wants to ease tensions with the north. He also says he will review the validity of the decision to install the U.S.’s THAAD missile-defense system, which threatens China as well as the DPRK.

That the warmakers chose the very moment of Trump’s meeting with China’s President Xi Jinping to carry out the missile attack on Syria has already been interpreted by the capitalist media here as a warning to China not to interfere if the U.S. treats the DPRK in the same way.

But the DPRK has nuclear weapons. And it is telling the U.S. in no uncertain terms that it will use them if attacked.

The many millions who have demonstrated against Trump and his reactionary politics must be made aware of this highly dangerous situation — especially because Trump is now being praised by both Republicans and Democrats for his criminal attack on Syria.