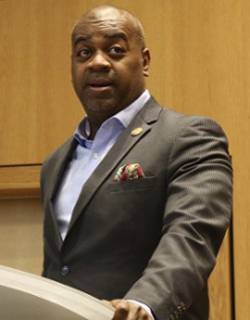 Newark, N.J., mayor Ras Baraka shared Newark’s concrete steps to overcome the economic, financial and commercial blockade imposed on Cuba by the U.S. government on March 25 at the National Conference for the Full Normalization of U.S.-Cuban Relations held here in Fordham University School of Law. It was initiated and hosted by the New York-New Jersey Cuba Si! Coalition to mobilize to end all U.S. economic, financial and travel sanctions against Cuba; to get the U.S. out of illegally occupied territory in Guantanamo; and stop all regime-change programs against Cuba.

Baraka announced that the next day, March 26, he would lead a delegation of elected officials, medical personnel, educators, activists and social scientists to Cuba. The purpose of the trip is to establish trade relations between Cuba and Newark. The city, which has the largest seaport on the East Coast, is the largest seaport in the U.S  However, the port is struggling for jobs, goods and services.

All U.S. systems have not worked for Black and Brown people, Baraka added. Hospital emergency rooms are being utilized because of the high cost of and limited access to health care. And hospitals are closing, replaced by unaffordable housing in Black and Brown communities.  Gentrification is not just about buildings, but about displacement and the lives of people in  existing communities. U.S. cities are overrun with homelessness and racialized poverty, said Baraka.

Social changes made by Cuba can benefit Newark, stated Baraka, referring to Cuba’s nearly 100 percent literacy rate, free access to education and health care, and lower infant mortality than that in the U.S. In the city of Newark, he added that four times more babies die in their first year of life than in New Jersey as a whole. The comparison between Cuba’s health care and educational systems and those of the U.S. are embarrassing and atrocious, Baraka stated.

Newark is doing things, and its relationship with Cuba may ultimately mean a matter of life and death for Newark residents, said Baraka.