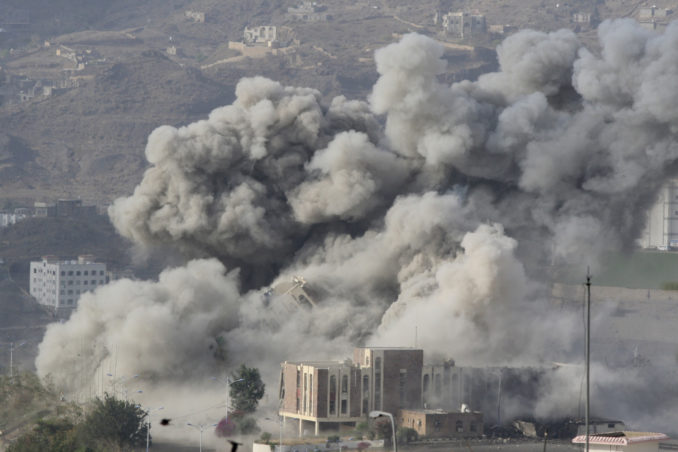 For over two years, Saudi Arabia and its Gulf Cooperation Council (GCC) allies, in coordination with the United States, have waged a vicious war on Yemen.

The attacks began in early 2015, when the Ansarullah (also known as “Houthi”) movement ousted the Saudi-backed administration of Abd Rabbuh Mansur Hadi. Ansarullah is allied with former Yemeni president Ali Abdullah Saleh, who himself was ousted in the 2011 “Arab Spring.” In an attempt to reinstate its client, the Saudi Arabian regime launched an aggressive military campaign known as “Operation Decisive Storm.”

The Saudi monarchy had the backing of the U.S. and the help of the United Arab Emirates, Morocco and other regional allies.

According to the United Nations, over 10,000 Yemeni civilians have died in the conflict. More than half of the 26 million Yemenis are currently experiencing food shortages, mostly due to Saudi blockades of key Yemeni ports. Plagued with widespread famine, destroyed hospitals and infrastructure, and perpetual Saudi bombings, Yemen is facing a major humanitarian crisis. Western corporate media have remained virtually silent.

As the U.S. deploys more troops to Syria and Iraq, Pentagon involvement is set to increase in the war on Yemen as well. The Barack Obama administration sold billions of dollars of weapons to the Saudi government, and provided intelligence, logistical support and drone strike campaigns. The Yemeni population had to face U.S. airstrikes, Saudi bombs and malnutrition, all without food or health care resources, while it also faced assaults from al-Qaida.

During his short time in office, Trump has already escalated U.S. attacks on Yemen. In late January, the U.S. military carried out a raid that resulted in an estimated 30 civilian deaths, continuing the Pentagon’s policy of never protecting civilian lives in countries it invades.

In late March, the Trump administration proposed increased U.S. involvement in Yemen on behalf of Saudi Arabia and the UAE, after granting the Pentagon more authority to conduct airstrikes in Somalia. The Trump administration is reportedly considering aiding a Saudi/UAE offensive against Hodeida, another key Houthi-held Red Sea port. The U.S. generals are also considering more arms sales to Saudi Arabia.

Secretary of State Rex Tillerson has reportedly signed off on a precision-guided munitions sale, while Defense Secretary James Mattis has requested White House approval for U.S. surveillance, intelligence and operational planning in the UAE-led offensive on Hodeida. The administration has also approved a $5 billion sale of 19 F-16 fighter jets to Bahrain, a part of the Saudi-led offensive. (The Hill, April 1)

Due to the Shiite ideology of Houthi forces, Saudi and U.S. corporate media have accused them of being a proxy of Iran. There is no evidence, however, that the Houthis are operating as Iranian allies. The assault on Yemen is no doubt part of a wider campaign for the U.S./NATO/Saudi-GCC/Israel alliance to secure their political, economic and military dominance in the region. Like the U.S./NATO war on Syria, the war on Yemen functions as an attempt to subvert the Iranian government.

The Trump administration’s granting of more authority to the Pentagon and the continuing U.S./Saudi war against Yemen will only increase the suffering in the region. Only the Yemeni people should decide how to run their country. U.S. and Saudi Arabia, hands off Yemen!