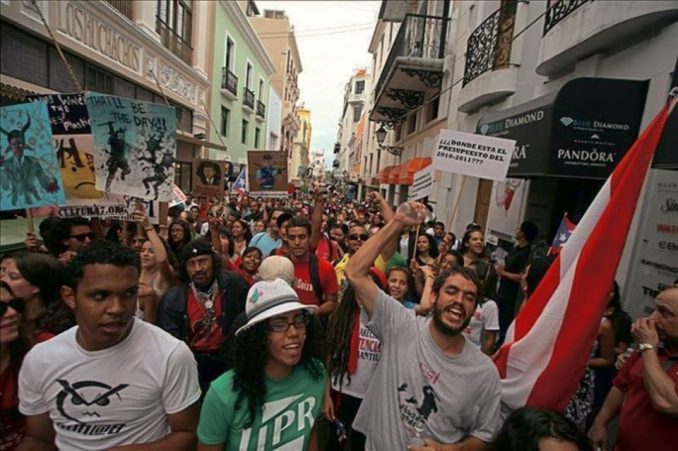 Thousands of UPR students march toward el Capitolio in protest.

On March 31, the Financial Control Board known as the “Junta” — the collection agency — met for the sixth time since its inception, this time in Puerto Rico. The U.S. Congress imposed the Junta on the Puerto Rican people under the Promesa Law (Puerto Rico Oversight, Management and Economic Stability Act of 2016), and its role is basically to collect the illegitimate debt produced by the sale of municipal bonds.

The purpose of this meeting, according to its website, was to passively “receive proposals and presentations on the subject of economic development by various representatives of government, private and third sector entities.” (juntasupervision.pr.gov)

As part of its debt repayment plan, the FCB will impose a $450 million cut to the University of Puerto Rico, leading to the closure and or “consolidations” of some of the 11 campuses of the university. This gigantic cut is a serious blow to higher education that will cause the institution to lose its accreditation.

Hundreds of students and solidarity organizations protested outside the building where the Junta was meeting, trying to expose the Junta’s criminality and insisting it comply with their demands.

Starting early in the morning, they marched from the well-known Muñoz Rivera Park to the Convention Center where the Junta was meeting. They even walked inside the large fountain at the entrance of the Center, which was heavily guarded by hundreds of police and firefighters.

The protesters were mostly students at the University of Puerto Rico (UPR), who exposed what in this moment is the true mission of the FCB — to destroy Puerto Rico as a country. The UPR, the only public institution of higher education in Puerto Rico, embodies the very future of the archipelago. There, the future teachers, scientists and professionals are prepared to be able to lead the country’s development for the benefit of its people.

In fact, the UPR is ranked as one of the most prestigious institutions of the Caribbean, and hence has drawn participation from major U.S. educational institutions and from NASA, among many others. Since it is subsidized by the government, the UPR offers students from poorer families better career possibilities.

That last day of March was already the fourth day of the strike, which was called by the students on March 21. In a general assembly, students of the Río Piedras campus had approved, by 1,312 votes in favor and 253 against, a stoppage of academic work from March 28 to April 5. On the fifth day, students of the 11 campuses of the UPR will meet in a National Assembly with students from the Conservatory of Music of Puerto Rico and the School of Plastic Arts of Puerto Rico.

Then, on April 6, the Río Piedras campus will go on indefinite strike. This decision for an indefinite strike was made on March 21 and is not subject to the results of the National Assembly called for April 5.

The first demand of the striking students is to audit the debt. This has not yet been done and current Gov. Ricardo Roselló, whose New Progressive Party advocates statehood and who, therefore, has a subordinate relationship to the Junta, even eliminated the independent auditing board. The other demands are no budget cuts, no tuition increases and make reforms for UPR.

Obscene hiring by the Junta

The Junta — read the U.S. Empire — has decided to destroy its colony, Puerto Rico, and turn it into a backyard for fun and investment for its billionaires, who receive a huge Puerto Rican tax exemption. That’s even more than before.

While ordering deep education cuts for Puerto Rican students and other austerity measures such as wholesale tax increases, closing 300 public schools, and a long list of cuts and “adjustments” that further impoverish the population, the Junta obscenely squanders the Puerto Rican people’s money with impunity on million dollar contracts.

With crocodile tears, José Carrión, president of the FCB, said, “Because of the crisis in the country, I am ashamed of every check I sign,” in a message sent to the Puerto Rican chapter of the U.S. Association of General Contractors. (elnuevodia.com, March 30)

This statement was a response to massive criticism after the board appointed as its executive director Natalie Jaresko, a Ukrainian-American woman born in Chicago. The U.S. State Department had sent Jaresko to Ukraine to serve as minister of finance, where she exercised a predominant role in the efforts of the U.S. to control the Ukrainian government.

According to an article in Claridad on March 29 titled “Jaresko: Why did she come to the Caribbean?” Jaresko was closely associated with the infamous U.S. Agency for International Development. “Regarding the management Jaresko (joined by her then husband) made of funds [of USAID] there were allegations of corruption because she allocated millions of dollars as a ‘bonus’ much higher than her base salary.”

While the Junta is reducing the pensions of Puerto Ricans, raising taxes and all kinds of fees, cutting people’s benefits and access to health services, it is giving Jaresko a salary of no less than $650,000 a year plus travel expenses to Kiev, a chauffeur, housing, etc. — all paid by the impoverished people of Puerto Rico!

Add to this the hiring of an “ethics officer” for the Junta. “To the salary of the new executive director of the Fiscal Control Board (Jaresko), add a compensation of $750 an hour for the work of Ethics Officer Andrea Bonime Blanc.” (NotiCel, April 1)

The people have the last word

As the empire, with its criminal Junta, is attempting to decide the future of Puerto Rico, the students together with other sectors, including labor, environmental and social, and including Puerto Ricans in exile — the so-called diaspora — are preparing to intensify the struggle. It is a crucial time for Puerto Ricans, and the people are feeling it in their hearts. And they are getting ready.

From the United States, we should unite our voices and actions to protest the dictatorial Junta in defense of and in solidarity with the Puerto Rican people.