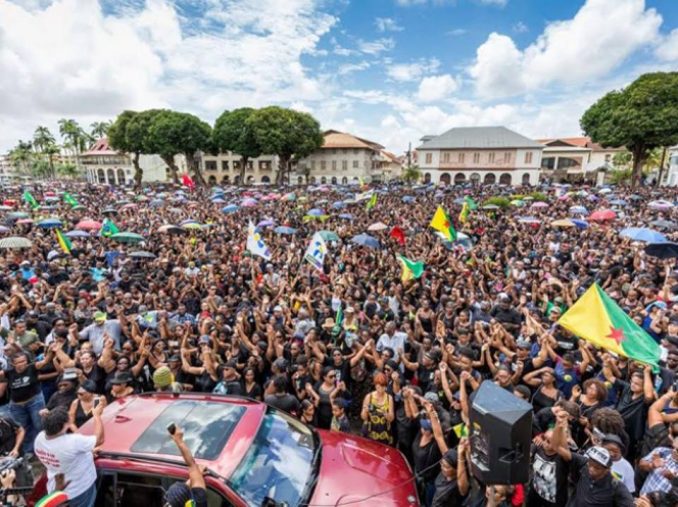 The last two weeks of March saw the people of French Guiana stand up in a massive struggle for justice, health care, education and jobs, in addition to water and electric service.

All 37 trade unions in the Union of Guianese Workers began an unlimited general strike on March 27, which shut Guiana’s economy down completely and was still in full force on April 2.  Before the general strike was called, protests mainly shut schools and set up roadblocks, especially where main roads cross.

In France, three of the most progressive unions, the CGT, the FSU and Solidaire held a press conference March 27 to support the unlimited general strike. It has been an issue in France’s presidential campaign.

When May 1, International Workers Day, comes up at the end of this month, the struggle in Guiana should have a prominent place in the placards, banners and speeches.

French Guiana is a virtual colony of France with the formal status of a French department. Located in the northeast corner of Latin America, it was used as France’s penal colony for 100 years or so. The Guiana Space Center is the main facility for launching European rockets. About 60 percent of the world’s commercial launches are done at the GSC, as its location near the equator gives rockets a 19 percent boost from the Earth’s rotation.

March 28 saw a massive demonstration of 20,000 people in Cayenne, the capital of French Guiana, called by the collective Pou Lagwiyann dékolé.  Some 4,000 people people came out in Moroni, Guiana’s second-largest city.  These were historic numbers, given that Guiana’s population is at most 250,000 people.

The demonstrations, while predominantly Black, were very diverse, with many whites and descendants of indentured servants brought from India who mainly live in the interior of Guiana, an area not linked by roads to the rest of the country.  Whole families came, along with nurses and doctors, truck drivers, farmers and teachers.

The situation of the majority of people in French Guiana is better than many other places in Latin America. It has drawn a large number of migrants, both those with documents and those without, so that today more than 35 percent of the people there are foreign born. But conditions in Guiana are far worse than those in metropolitan France.

Take the basics: electricity, water and roads. Antoine Karma, Guiana’s representative in the French Senate, told Radio France on March 24 that “30 percent of the people in Guiana don’t have access to potable water or electricity.”  Seven out of the 22 communes in the territory are not connected by road. Some women have to travel around 250 miles for maternity care, according to a 2014 government study.

Youth have serious problems with education. Less than half the youth between 15 and 24 are in school and only 12 percent pass the “bac,” the test for going on to university or technical school. There is a serious shortage of middle schools and high schools.

Some 40 percent of the youth are unemployed, while unemployment overall is 22.3 percent and wages are so low that many more Guianese get government help in order to bring their incomes up to minimum standards than do people in metropolitan France.

Food and housing are much more expensive in Guiana than in metropolitan France. Food is 45 percent more expensive because it either comes 4,500 miles from Europe or is imported from nearby Latin America, which means it is subject to significant import duties. Housing is more expensive, since all construction materials have to come from Europe and the French state owns all the land in this former colony.

The leaders of the unions on strike and Pou Lagwiyann dékolé refused to meet with a delegation sent from Paris, including a group of high-level bureaucrats. But after the massive demonstration on March 28, the Holland government got its act together and the very next day sent Matthias Fekl, minister of the interior, and Ericka  Bareigts, minister of overseas territories.

In their first meeting with the ministers, the Guiana leadership presented a list of 420 demands. On April 1, the government made an offer of 1.09 billion euros in immediate aid, followed by a medium-term grant of 4 billion euros this year.

The Guyanese rejected this offer because it didn’t have the changes they want in their relationship with France. On Sunday, April 2, they added a demand for 2.5 billion euros.