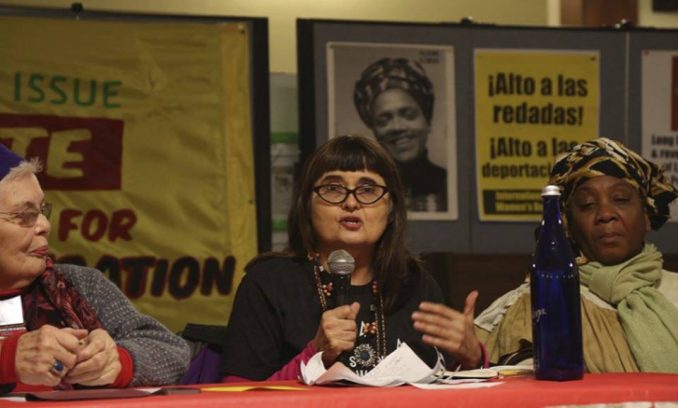 This article was edited from a talk given March 18 at the Workers World Party forum in New York City in honor of International Working Women’s Month.

Let’s start by acknowledging that we are on stolen Lenape land. This land is not covered by any treaty. If you have heard over the years that this land was sold to the Dutch by the Lenape for beads and trinkets in the value of 60 guilders, ask yourself if permanently losing all of this island could possibly have been their intent.

Many of you here have followed the struggle against the Dakota Access Pipeline. I will talk about that and also put that struggle in the context of women’s roles in the many Indigenous struggles of the past and present.

The heroic struggles against the pipelines raging on the Great Plains right now were begun and are led by Native women and youth. The corporate media may often focus on the role of largely white environmental organizations and leadership, but the true leadership on the ground is Indigenous women.

The Standing Rock youth movement began with a young Lakota woman and her cousins who were demanding a safe space at Pine Ridge Reservation in South Dakota for youth who face social conditions of oppression from the colonial-settler state forcing Native peoples onto reservations. There they were introduced to alcohol, impoverishment and bourgeois values of misogyny and abuse. This goes back to Ben Franklin, who called for the introduction of alcohol to subjugate the Indigenous nations of Great Turtle Island.

These youth activists went to the anti-Keystone XL camp, met Indigenous Environmental Network activists, the Native women in leadership, trained in direct action, and the camp became their safe space.

After the KXL was halted due to the widespread struggle against it, the youth focused on Standing Rock. There, they — along with Ladonna Brave Bull Allard and other traditional Lakota and Dakota women — established the Sacred Stone camp in the pathway of the Dakota Access Pipeline. The pipeline was considered too hazardous for the water supply of mostly white Bismarck, N.D., so it was moved above the Standing Rock Reservation’s water supply at Lake Oahe on the Missouri River. Lake Oahe was created from a previous land grab by the U.S. which expelled Lakota ranchers and homes.

Traditionals from the reservation then joined and set up a Council Lodge, not done since before the Oceti Sakowin, the Lakota/Dakota/Nakota had been reservated, and began to work with the youth to embrace elements of their original culture and values. Youth were even deputized as akicita, warriors who protect the people.

Women and youth will fight and win

In Oceti Sakowin society, tradition held and it was foretold that the seventh generation — that is, the youth of today — would fight a black snake threatening the life of the people and that they would kill the black snake. Also, traditionally the women are responsible for protecting the water and leading the people, and the men stand shoulder-to-shoulder with them.

The Standing Rock youth embraced the old traditions of runners to carry news, and they ran to Omaha and then to Washington, D.C. to deliver petitions to the Army Corp of Engineers opposing this threat to the waters of the Standing Rock reservation. They are theirs under a legal doctrine pertaining to waters of reservations (known as Winters Rights).

The call from Standing Rock women and youth to all the Native Nations was heeded, and Indigenous people dropped their daily lives and came to the camps from great distances — from the Dine in the Southwest Four Corners, many Oklahoma-based nations, Pacific coastal nations, even Native peoples from the Land of the Condor, South America. Allies poured in as well from the Four Directions.

Knowing that any show of military resistance could be met by extermination and massacre, as happened uncounted times in the past in the unceasing Indian wars of this colonial-settler state, all was done peacefully and in prayer. Women and youth stood up to company goons to protect sacred sites and ancestral graves and were attacked with G4S dogs, tear gas, mace, rubber bullets, concussion grenades, LRADs that can permanently damage hearing, even water cannons in freezing wintry conditions.

In November and December as the repression intensified, some of the older women sent the youth home to protect them. The hundreds of arrested include many elders and many, many women. One of the last arrested as the camps were finally cleared entirely in late February was Regina Brave, who is 80 and a veteran of the Wounded Knee takeover in 1973.

Many people took grievous wounds as a result of the military repression at Standing Rock. Just to mention a few, a young Dine mother of four, Vanessa Dundon, lost sight in an eye after being shot in the face with a tear gas canister. Sophia Wilansky, a young white environmentalist ally from the Bronx, N.Y., had her arm blown up when goons threw a concussion grenade at her. She is still recuperating. Wilansky has noted that the media largely paid much more attention to her because she is white than to the many Indigenous people who were wounded.

The Trump administration greenlighted the DAPL, and oil may run through it very soon. But the struggle has spread. Many of the water protectors have joined other pipeline struggles around the country, from the Trans-Pecos in Texas to the Sabal Trail in Florida. People are fighting the Pilgrim pipeline in New York, which is planned to run close to the Indian Point nuclear plant.

Fights against pipelines and all extractive industries began long before the Dakota Access struggle, and will continue long after, too.

We should support the hundreds of people arrested at Standing Rock, especially those facing extreme charges such as Red Fawn Fallis from Denver. She was assisting the medics and protecting people who had been injured when she was targeted for arrest. Cops and goons planted a gun on her, and now she faces felony charges.

A continuing tactic in the pipleline struggles is to get individuals and cities to divest from Dakota Access and Keystone XL, especially investors and lenders such as TD Bank and Wells Fargo, in order to put a financial squeeze on pipeline companies. Seattle and other municipalities have already taken steps to divest. San Francisco voted to divest on March 14, and Los Angeles may be next.

The next day, USA Today ran online coverage with the headline “Women of Standing Rock aren’t backing down.” Sometimes corporate media have made it seem as though Native women being in leadership is a new thing, but it’s not. In traditional Indigenous societies, communities were almost all matrilineal — some of them matriarchal, in fact. These traditions survive to some extent in many Native nations.

The original white feminists in Seneca Falls, who were a movement on the ground in colonial upstate New York, were inspired by the Haudenosaunee women — the Mohawk, Seneca, Tuscarora, Oneida, Onondaga and Cayuga nations — the so-called Iroquois people.

Native women have kept traditions going and kept families together for centuries in the face of multiple and ongoing forms of genocide — massacres by settlers, starvation and disease, destruction of our languages and ceremonies, cultural genocide, displacement from ancestral lands, rape, murder, kidnapping, sterilization abuse, exposure to uranium and other devastating toxins created by mining, and much more.

Twentieth century life has been fraught with devastation caused by colonial capitalist society, including mass theft of children sent to boarding schools, and nowadays into foster care, in attempts to destroy Indigenous families and cultures and to eliminate pre-class social values and structures, language and community, and spiritual practices.

On March 15 Trump laid a wreath at Andrew Jackson’s gravesite to honor his hero, a genocidal monster. I call him the “Hitler of the Trail of Tears.” He’s the man responsible for the Indian Removal Act, which forced 70,000 Indigenous people to relocate west of the Mississippi between 1838 and 1839. More than 4,000 Tsalagi/Cherokee and other men, women and children died on the Trail of Tears.

United States presidents from Jackson to Trump have thought that Native people were going to be swept away under the wheels of manifest destiny — but they were and are dead wrong. In fact, the sense of Indigenous unity and strength right now, and the drive and movement to decolonize, are the strongest they have been in decades.

Native people are fighting back against forced assimilation and erasure. All U.S. history has been written and taught in a way to eliminate and erase Native nations altogether. Immigrants arrive now and never learn even the rudiments of who lived in that place before they arrived.

The fight is to defend the sovereignty of Indigenous Nations and the enforcement of treaty rights for those nations that have treaties — and many do not. The fight is to protect the water, the earth and life itself, the biosphere.

I can’t begin to name all the amazing and bold Indigenous women who have fought back because there are so many. So I will just say that Workers World Party salutes ALL the Water Protectors and the Land Defenders.