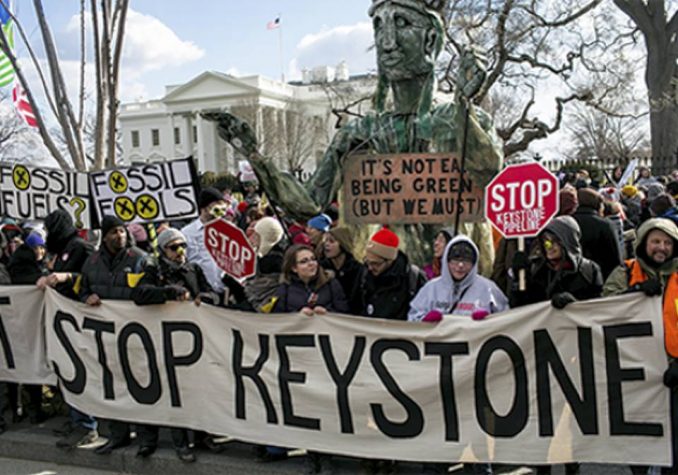 March 25 – President Donald Trump signed an executive order March 24 clearing the way for building the Keystone XL Pipeline. The State Department promptly issued the necessary permits. This pipeline, which was resisted by environmental activists and Native nations, will make it cheaper to transport Canadian crude oil mined from tar sands in Alberta to Gulf-state refineries in the southern United States.

Rex Tillerson, the former CEO of Exxon/Mobil and currently secretary of state, deflected criticism by recusing himself from the decision, but an under secretary had no problem issuing the permit. Given the current low price of crude oil and how expensive it is to extract oil from tar sands, some articles in the business press questioned the economic justification for this pipeline.

But the Trump administration, increasingly under attack, needed to nail down its support from Big Oil and corporate profiteers. This decision goes along with its encouragement of coal mining, even though the market for coal is being sharply undercut by competition from other energy sources like natural gas and wind and solar alternatives.

It lines up with the administration’s easing of requirements that would improve mileage for automobiles and trucks. That supports the oil and automobile profiteers, as does removing emission standards.

Along with his giveaways to the energy corporations, Trump has moved to unleash the Pentagon by giving the generals even more leeway to launch air attacks throughout the oil-rich region of North Africa and the Middle East.

This endless warfare instigated by U.S. and NATO regime-change agendas has already displaced millions. Their situation is made even worse by climate change, which has superheated the region, threatening the water supply and agriculture in already arid lands.

All this runs counter to any efforts to rein in global warming. It would be difficult for Trump to formally renounce the guidelines put in place by the 2015 Paris Agreement on climate, but he is making an end run around them in his quest to make the U.S. even more profitable for big business.

China has long had a major problem with smog and industrial pollution from steel plants and coal-fired power plants. Now, due to global warming, changing wind patterns have weakened the winds in northern China that would blow this smog and particulate pollution away.

New research points to the melting of the Arctic Ocean’s ice cover, combined with a resulting increased snowfall in Siberia, as the main factors leading to stagnant air over northern China.

However, as the March 25 New York Times pointed out, “As the Trump administration hints that it might move away from international efforts to cut emissions, environmentalists are looking to China, the world’s largest emitter of greenhouse gases, to play a leading role in curbing the use of fossil fuels.”

With four times the population of the U.S., China’s per capita CO2 emissions are much lower than here. However, China is already the world’s leading producer of solar and wind power technology. Its economic plans are built around a steady move away from fossil fuels.

According to the National Snow and Ice Data Center, which has used satellites for 38 years to map sea ice, the extent of the Arctic ice cover is now the lowest on record. The ice is also much thinner, meaning it is more likely to melt over the summer.

Thin ice makes the traditional harvesting of whales and seals by the Inuit people of the Arctic more difficult. These sea animals make up a major portion of their sustenance.

While it is hard to definitively pin particular weather events on global warming, the fact that water temperatures off the northern coast of Peru have risen 5 to 6 degrees Fahrenheit has produced a local El Niño, with flooding throughout Peru. By March 20, according to the National Institute of Civil Defense, 643,216 people had been affected by it, with more than 100,000 injured, 78 dead and 141,149 houses affected.

Damages have come not only from flooding but also from mudslides. Peru had suffered from a drought until the rains started. Poor people who built their houses on river banks and low-lying spots lived with occasional floods.  But the mud slides, which carry much debris as well as mud, along with the extraordinarily heavy rains, have washed these houses away.

With water supplies heavily damaged, most water systems in Peru are having trouble functioning.  Cholera is spreading.  Standing water facilitates the spread of mosquito-borne diseases like dengue, malaria, the zika virus and chikungunya.

East Africa has suffered from a severe drought for several years. Food production has been sharply cut. War, drought and a collapsed economy have brought Somalia to the edge of famine, with young children and the elderly dying of hunger.  Some local officials say they are digging mass graves because they fear large numbers of people will die quickly.

It is easy to see the direct U.S. role in the conflict in Somalia. Since 2001, the U.S. has carried out extensive covert operations involving reconnaissance missions, bombings and capturing Al-Shabaab militants, the jihadist group vying for power in Somalia.

Oil-rich South Sudan became a new country in 2011 after decades of a war for separation from Sudan supported by the U.S., which had imposed sanctions on the Sudanese government. Once separation was achieved, most of Sudan’s oil resources passed to the new country, which was then wracked with civil war. Now its agriculture has collapsed and a famine has been declared.

It is easy to blame the weather for the famines, deaths, injuries and loss of infrastructure and economic production that come with flooding and other catastrophes.   However, in reality they are caused by imperialist wars and capitalism’s voracious appetite for profit, that overrides all human considerations.