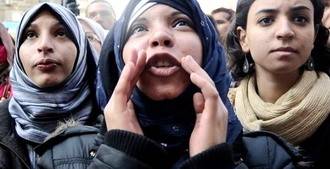 The author is a Marxist living in Ukraine. Her essay was originally published at Liva.com.ua and was translated by Workers World Contributing Editor Greg Butterfield.

March 7, 2017: As International Women’s Day is celebrated on March 8, the most important thing to discuss is that people in our country have forgotten about the history and content of this festival, which is a day of struggle for women’s rights, not a consumer holiday for gift giving and celebrating women as “mother-protector.”

The reason for this is not only distorted historical memory or poor education, but also the transformation that took place in the celebration of March 8 in recent decades as the result of social, political and socioeconomic changes.

In the second half of the 20th century, the situation of women in the territory of the former Soviet Union improved significantly. Women were on equal terms; were included in social and economic activities; had the opportunity to study, work, relax and participate in science on equal terms with men; were legally protected by the state and guaranteed rights as mothers; etc.

Despite the fact that today many of these social programs have been substantially reduced or completely eliminated, the foundation laid during the Soviet period allows women today to not so acutely feel the manifestation of gender inequality and discrimination compared with women in many other countries in the world. All this has somewhat obscured the original value of the date of March 8, turning this into a so-called “feminine celebration.”

In general, this applies not only to the former Soviet Union. The 20th century was almost universally marked by significant advances in the fight for women’s rights. However, even today, gender inequality and discrimination against women are extremely important and relevant issues. This is one of the key problems of modern development, and U.N. experts rightly include women in the category of socially vulnerable groups.

This conclusion is supported by statistics and sociological information. As noted by John Seabrook, “Women are still the poorest of the poor; among people living in absolute poverty, women make up 70 percent. Women work two-thirds of all working hours in the world, produce half the world’s food, yet earn only 10 percent of the world’s income and own 1 percent of property. Today, nearly a million illiterate adults live in the world; two-thirds of them are women.”

Experts at the International Labour Organization noted that discrimination and exploitation of women is gradually increasing in the 21st century. It is women who suffer most from cuts in government social programs, unemployment and worsening job conditions. The average level of their wages is 30 percent less than men — even in the most developed economies of Europe and the United States. As noted in the report of the World Economic Forum for 2016, in recent years the wage gap has grown even more in favor of men, and at the present rate it will take approximately 170 years to achieve parity between women’s and men’s salaries.

At the same time, it should be remembered that the problems of women from Third World countries are much more serious and bigger than in developed countries, as transnational corporations move production to the periphery, actively using cheap female labor. In Europe and the U.S. there is also a gender gap, but in poor countries, whose super-exploitation is the basis of First World prosperity, the situation of women is truly disastrous. This includes meager salaries, underpaid and forced labor without proper conditions of job safety, lack of maternity leave — and, consequently, of the ability to take care of children, who often suffer from hunger.

Just recently, on the eve of International Women’s Day, the U.N. called on the authorities of all countries to redouble their efforts to overcome discrimination against women and improve their lives. In particular, the U.N. proposes to start the implementation of a program called “Women in the Changing World of Work: Planet 50-50 by 2030.”

According to this program, key aspects of the global agenda for the period up to 2030 are the following tasks:

The 19th and 20th centuries were marked by the development and spread of one of the most progressive phenomena in human history — the organized women’s struggle for their rights.

An important role in this fight, which led to significant social and gender achievements, was the introduction of a scientific program of action, pointing toward the struggle for socialism. The key figures in this movement were women such as Clara Zetkin and Rosa Luxemburg, whose names are connected to the history of March 8.

Many prominent thinkers have repeatedly pointed out that the situation of women is a measure and indicator of the overall development of society. Today the world is in crisis; it is seriously ill — including injustice against women. The full emancipation of women is an important task in the struggle of all progressive movements that aim to improve the world and build a socially just society. This is what the day March 8 reminds us of.

To read in the original, visit tinyurl.com/lywyrja.