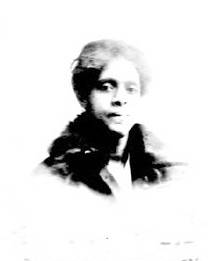 Addie Waites Hunton was a central figure in the development of the Pan-African movement. She was born in 1866 in Norfolk, Va., to Jesse Waites and Adeline Waites. Waites earned a high school diploma at the Boston Latin School, and in 1889 she became the first African-American woman to graduate from the Spencerian College of Commerce in Philadelphia.

Waites married William Alpheus Hunton Sr. in 1893. He was a pioneer in Young Men’s Christian Association work among Africans in the U.S. The family moved to Atlanta, where she worked as a secretary at Clark College. After the 1906 racist terror leveled against the African-American community, the Huntons relocated to New York City.

Between 1906 and 1910, Addie Hunton worked as a staff organizer for the National Association of Colored Women. She was an advocate for women’s suffrage in the campaign for the ratification of the 19th amendment, which granted voting rights to women. She urged leaders of the white suffrage movement to support access to voting for African people in the U.S.

Toward the end of U.S. involvement in imperialist World War I, Hunton, along with Kathryn Johnson, served on behalf of the YMCA in Paris, assisting the hundreds of thousands of African-American troops deployed there. The women published a book in 1920 about their observations and experiences in France titled “Two Colored Women with the American Expeditionary Force.”

This book provides first-hand accounts of the horrendous conditions that African-American troops were subjected to during their terms of service in France. The U.S. armed forces carried out widespread discrimination against Black soldiers who were routinely denied food, medical treatment and access to public accommodations.

Hunton attended the Pan-African Congress organized by W.E.B. Du Bois in 1919 in Paris. The event has been labelled the Second Congress by historians. Du Bois requested the intervention of Blaise Diagne, a Senegalese representative in the French Assembly, to hold the gathering.

According to Du Bois, “Diagne secured the consent of Clemenceau to our holding a Pan-African Congress, but we then encountered the opposition of most of the countries … to allowing delegates to attend. Few could come from Africa; passports were refused to American Negroes and English whites. The Congress therefore, which met in 1919, was confined to those representatives of African groups who happened to be stationed in Paris.” Of the 57 delegates from 15 countries, nine were from African countries with 12 delegates, 16 were from the U.S. and 21 from the West Indies. (Andrew G. Paschal, editor, “A W.E.B. Du Bois Reader,” Macmillan, 1971)

Subsequently, Hunton remained active with the NACW and became an official of the NAACP. As a member of the executive board of the Women’s International League for Peace and Freedom, she traveled with a women’s delegation to Haiti in 1926. Afterwards, she wrote a condemnation of U.S. occupation of the island and advocated for Haiti’s independence.