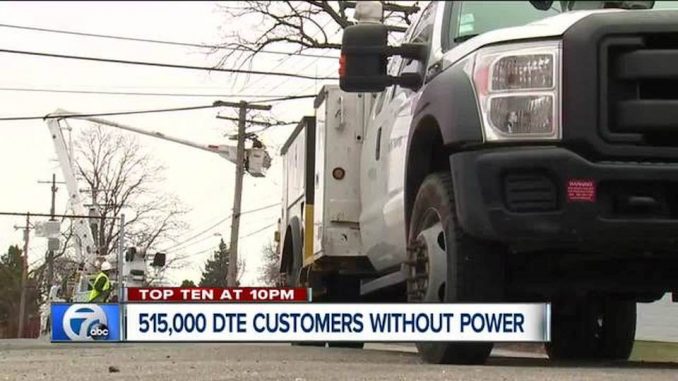 Roseville, Mich., March 14 — I’m waiting and hoping that today is the day power is restored to our neighborhood and we can leave this awful motel. It’s been seven days and six nights. In the meantime, I’m trying to put it all into perspective.

I’m very grateful a work check came through right before the outage. I’m grateful we were able to evacuate to a motel. I’m grateful my bird is OK, and that my spouse and I have retained some semblance of sanity during this trying time, although there have been a lot of tears, too, mostly on my part.

I’m grateful the home we love hasn’t been broken into and we can eventually go home. I’m grateful that we have vehicles, not just one, but two.

I think of the Detroiters, the majority Black, many very poor and oppressed, who could not escape. I think of those people with babies and young children, and the elderly, and I wonder if there is a death toll because of this power outage. I know that in the communities people are looking out for each other, helping each other, doing what human beings naturally do when there is a catastrophe of any kind.

I think of how my mental health has been stretched to the limit and all the discomfort and misery of being confined to a small room. The smallest thing can be an occasion to burst into tears and fantasize about militant actions at DTE Energy Co. headquarters and doing what has to be done. Thankfully those episodes don’t last for long — except for the militant actions part.

I think of the 245 million people around the world who are migrants, who are displaced from their homes or are refugees. Many have nothing but the clothes on their back. They are far from home, having fled U.S.-backed or U.S.-funded weapons of mass destruction and the ravaged conditions these caused.

I think about those who have died on the high seas or survived to enter a hostile country, a racist place with no welcome. They have come from places where electricity and the entire infrastructures have been destroyed thanks to U.S. imperialism and its NATO partners. Places like Libya, Yemen, Afghanistan, Iraq, Syria. They have lost everything.

I am wealthy as sh-t compared to them, and my income is pretty low.

The day of the massive windstorm, Wednesday, March 8, was International Working Women’s Day and my spouse’s birthday. The explosions I heard when the power went out were the transformers, DTE workers told us. The company says it was the high winds of up to 75 miles per hour that caused the outage to over 800,000 customers in southeastern Michigan, affecting millions of people.

DTE and media are to blame

But we don’t live in a planned society that even considers such possibilities. The owners of these companies see no profits in upgrading power lines and equipment. They think: Why invest profits [money they stole from workers] in upgrades when we may have to wait years for a payoff? And what they really want is a high value on this year’s bottom line.

After six full days, DTE Energy claims it has restored power to all but a few thousand people (most of them in Detroit). Workers and those who came from other states have done a great job under difficult conditions. Line workers, however, told us there are no plans to fix the outage on our street. The lines are fixed, but the transformers still don’t work.

The corporate-owned media have regurgitated DTE’s press releases, lying to the people about when their power will be restored. Not one reporter we contacted has had the guts to challenge this utility giant, although one courageous worker at a TV station gave us an inside number to humans at DTE.

The DTE corporate behemoth, which provides both electrical and natural gas power, had gross earnings of $1.93 billion in 2016; its net income was $866 million.

However, customers who lost refrigerators and freezers full of food, whose water pipes froze and burst, who had to pay for housing and other food will receive a maximum of $25 for their inconvenience. That’s only if their power was out a full five days. Everyone else can fend without that $25.

DTE Energy is known to be a racist company. Many workers have sued their employer because of the hostile work environment, where they had to put up with heinous, racist acts or symbols, as well as acts of sexism and age discrimination.

The company is also anti-poor to the core, though every year the bosses claim to care about poor people who cannot pay their utility bills. But people can’t make a choice to keep one utility, because DTE has combined gas and electricity services.

Each winter DTE runs a charity fundraiser for itself called THAW — The Heat And Warmth fund. The bosses want some poor people to contribute so that other poor people can receive those contributions from DTE and then give them back to DTE. This disgusting display of corporate welfare is broadcast annually on radio.

This is Detroit, a third-world city in a first-world country, destroyed by racism and avarice — of the banks, of the corporations, of a capitalist system that does not give a damn who lives or dies. In fact, this rapacious system would like to exterminate the entire working class, especially Black people, who are the fiercest fighters because they have faced the fiercest oppression in a society built on genocide and slavery.

DTE Energy must be forced to pay reparations to all the people who were most affected by the company’s latest outage.

Balderas-Hamel was able to return home the night of March 14.