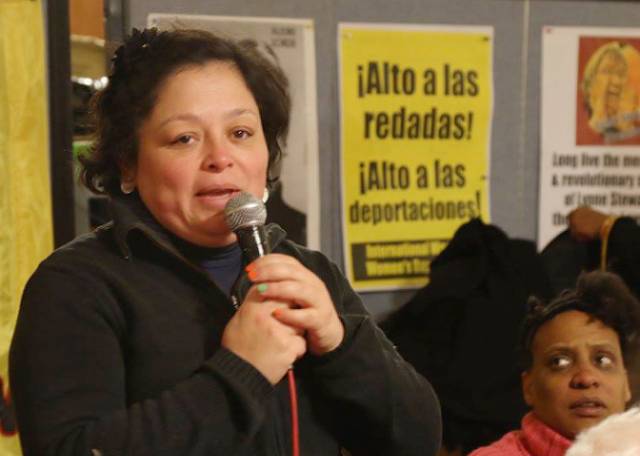 Meches Rosales-Maupin reported on the protest at the Guatemalan Consulate to the International
Working Women’s Day Roundtable on March 11.

The deaths of over 40 young women in Guatemala City, Guatemala, on March 8 — International Women’s Day, no less — demonstrate how imperialism and all its byproducts continue to grossly fail the world’s youth.

Over 40 young women were burned to death as a fire swept a Guatemalan children’s shelter. Nineteen died at the scene and the rest in hospitals.

Early reports said the fire started when the young women, angered by deplorable conditions, set a mattress on fire to get the officials’ attention.  But as more information is discovered, reports point to the fact that the children died because they were intentionally locked in the building and could not get out when the fire got out of control.

The shelter, overcrowded and neglected by the state, held poor children, some who were orphans. Many were victims of child abuse. Reports indicate that the girls had run away from the shelter because of the terrible conditions, were recaptured, and then the administration punished them by locking them in. It reportedly took almost an hour for fire officials to arrive.

The shelter was built to house 500 people but was actually housing 750 children at the time of the fire. Reports are still coming in about conditions, but there had been reports of trouble at the shelter for several years. (New York Times, March 9) In fact, a prosecutor had already recommended shutting it down.

Family members of the young girls have joined other Guatemalans in protest and thousands have taken to the streets. The movement is declaring “Fue el estado” (It was the state) that was responsible.  Hundreds of women are organizing against this attack, the latest on the lives of women and youth, and adding to the charge that the state was responsible for the lives of the 40 young women.

Independent journalists are pulling together facts that indicate the state is completely responsible.  Witnesses told the Guatemalan publication Nomada that other youth had been trying to help the young girls days before the fire. (March 13) The girls were trying to get help, witnesses report, because of sexual abuse and other vile misconduct by the staff.  These protests had been ignored by the state, leading to the youth running away, their recapture and then the ghastly fire.

Guatemalans in New York took to the streets and held a protest in front of the Guatemalan Consulate on March 11.  Another protest is planned there on Saturday, March 25, at 3 p.m.

One of the Guatemalan activists in New York told WW, “We are organizing in support of our sisters in Guatemala and declaring no more femicide in all of Latin America.  Please join us in front of the consulate at 276 Park Avenue at 23rd Street.”