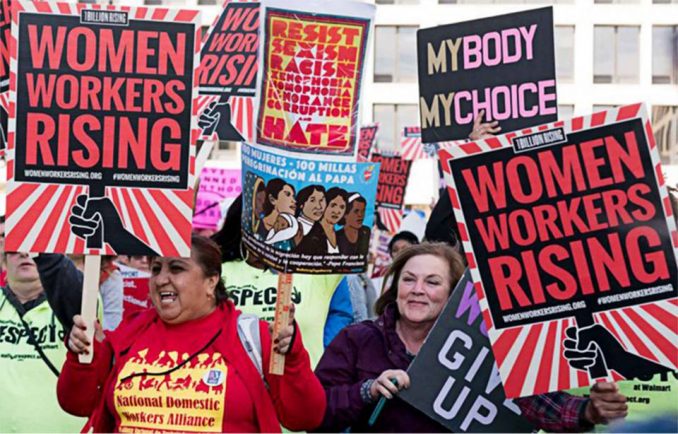 Calls for a Women’s Strike ignited International Women’s Day in the U.S. on March 8. Organizers were following up on the massive Jan. 21 women’s protests, held on all seven continents, against the inauguration of the extreme-far-right Donald Trump administration.

According to womenstrikeus.org, 50 U.S. actions on March 8 were part of a “new international feminist movement” to specifically defend “women who have been marginalized and silenced by decades of neoliberalism directed towards working women, women of color, Native women, disabled women, immigrant women, Muslim women, lesbian, queer and trans women.” They condemned not only the Trump administration’s woman-hating policies but also the U.S. “decades-long economic inequality, racial and sexual violence, and imperial wars abroad.”

Also organizing for March 8 were U.S. sponsors of the Jan. 21 Women’s March on Washington, mobilized as “A Day Without a Woman,” to recognize “the enormous value that women of all backgrounds add to our socio-economic system — while receiving lower wages and experiencing greater inequities, vulnerability to discrimination, sexual harassment, and job insecurity.” (womensmarch.com/womensday)

One Billion Rising, a campaign to end the exploitation of women, joined with labor organizations in a strong show of force at a demonstration at the Department of Labor in Washington, D.C., under the banner “Women Workers Rising.” The protest was announced in solidarity with women marching around the world. Highlighted was the fight to end sexual harassment and violence against women workers “every day at workplaces across the country, in every occupation and industry.” (womenworkersrising on Facebook)

Schools in both Alexandria, Va., and Chapel Hill-Carrboro, N.C., were closed on March 8 because of expected large staff absences due to the strike. In Ithaca, N.Y., organizers from the Women Strike and Decarcerate Tompkins County came together in a March for Incarcerated Women and Their Families. Under the slogan #SayHerName, they reached out to supporters: “We ask you to bring your body for the women who cannot; to remember our sisters who are behind bars.”

This March 8 was not a day of polite lip-service and compliments to women. Instead it was “feminism of the 99%” with walk-outs and stay-homes from workplaces; rallies, protests and marches; workshops on how to organize at work, the history of women’s labor, how to leaflet your neighborhood; dance, music and theater performances; and a cry of “Resist, resist, resist!” ringing throughout the day.

But most significant was the call for women to strike, issued at a mass level of organizing and appeal. This class-conscious rallying cry connected women’s struggle for liberation with workers’ power to withhold labor as a weapon against capitalism. The call “Women Strike!” reconnected International Women’s Day to its revolutionary socialist origins and promoted the hope that a new movement for women’s liberation is emerging, rooted in class struggle. Plans are already underway for participation in the May 1 Global Strike.

In New York City, the International Working Women’s Day Coalition held an intergenerational, multiracial “Women Rise and Organize!” roundtable discussion on March 11. The meeting was dedicated to the fighting spirit of people’s lawyer Lynne Stewart, who died on March 7. In keeping with the coalition’s perspective that “every issue is a woman’s issue,” panelists from various groups discussed a wide array of struggles, including reproductive justice and health care; immigrant rights; public education; students with disabilities and the right to accessible, public transportation; affordable housing; war and occupation; Indigenous sovereignty; political prisoners; violence against women; Haiti; the right to organize; Black and trans lives matter; and more.

Each issue was discussed within the framework of organizing goals and of challenges faced and lessons learned from organizing experiences. When the coalition meets again in early April, among various activities to be discussed will be support for for the Global May Day Strike. — Monica Moorehead 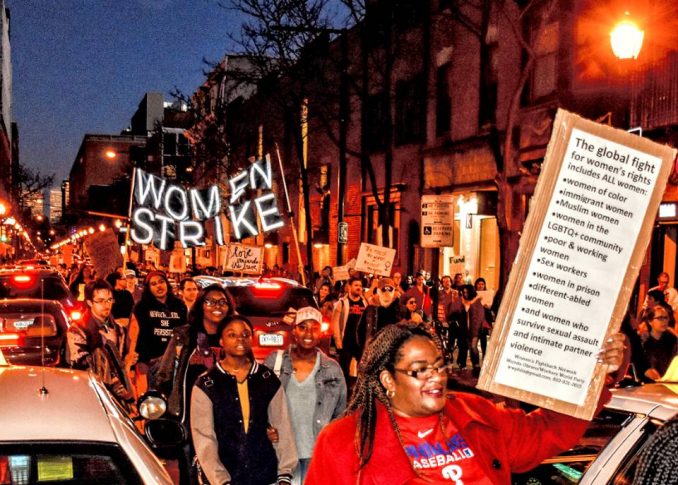 Hundreds of protesters gathered in early evening on March 8 at Logan Square in Philadelphia, then took to Center City streets to protest economic and political inequality as part of the global call for a “Day Without a Woman.” Earlier that day, city teachers had picketed before classes, with about 930 of them staying out of work and using the day to lobby the City Council on educational issues. Many joined the evening protest.

As the march advanced, often against city traffic, signs and chants called for the inclusion of Black, Brown, immigrant, LGBTQ+ and Muslim concerns.  Speakers demanded solidarity with sex workers as well as low-wage workers fighting for the right to unionize. Others voiced outrage over the recent increased murders of women of color and transgender people. The march ended at Thomas Paine Plaza with an outdoor speak-out.    — Betsey Piette 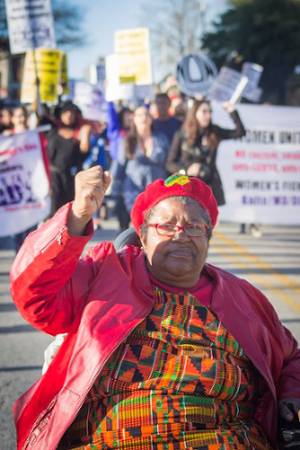 Close to 400 people took to the streets in Baltimore to protest on International Women’s Day. Called by the newly formed Women’s Fightback Network, the march attracted a diverse crowd of mostly young Black, Latinx and white women, though older activists also joined. The 77-year-old Rev. Annie Chambers, a veteran housing organizer, boldly led from her electric wheelchair despite continuous harassment from police, who threatened to arrest protesters en mass at several points.

Stopping at the women’s jail, protesters demanded an end to mass incarceration, and then marched to the Douglass Homes public housing development for a speak-out on how women are exploited in public housing. Then the Women’s Fightback Network marched to the police station, past City Hall, and ended their event at McKeldin Square.

Along with major issues facing women, including trans women, LGBTQ+ and gender-nonconforming women, the event addressed Immigration and Customs Enforcement violence against immigrant communities. Many chants and speeches were called out in Spanish.

The WFN asked marchers to pledge support for anyone targeted by their boss, ICE or cops for participating in protests and strikes. The group’s next step in to organize for the Global May Day Strike.              — Sharon Black

Along with several marches throughout Chicago on March 8, more than 300 women and supporters rallied at the offices of the Chicago Teachers Union. Led by a coalition of union, community and political activists, the speakers were predominantly women of color. The program was chaired by Christel Williams, of the CTU, representing the movement to create true sanctuary in Chicago Public Schools, protecting all children and families from ICE deportations and from the school-to-prison pipeline.

Williams is one of hundreds of clerks threatened with layoff from their important service to parents, children and staff. The clerks are predominantly single women of color from the communities; they are also graduates of CPS schools and parents of children attending CPS schools.  Other union struggles addressed were those of day care and transit workers and of recently organized charter school teachers, who are preparing to strike in the coming week.

Co-chairing the meeting was Adriana Alvarez, a McDonald’s worker from Fight for 15. A woman from Black Youth Project 100 highlighted the struggles of Black, queer, trans and gender-nonconforming people against recent violence and murder. There were performances by several groups, including a spoken-word piece titled “Pussy Grabs Back.”

International connections were made by Rasmea Odeh, the Palestinian leader of Arab American Action Network, who spoke on the U.S. government’s case against her as an example of political repression. Nerissa Allegretti, from GABRIELA USA, talked of the growing movement for solidarity and justice for women around the world. — Jill White 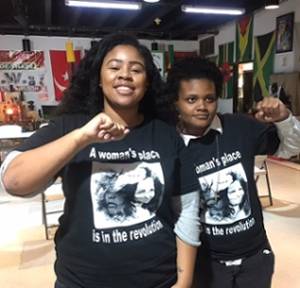 In Houston the IWD celebration, organized by Freedom Road Socialist Organization, educated and motivated activists and students as well as some new to the struggle. Kinsey Tamsin, a trans woman and FRSO activist, spoke about daily obstacles trans people face. She praised socialist Cuba for the tremendous progress made through CENESEX, the Cuban National Center for Sex Education, on LGBTQ+ rights, including free sex-affirmation operations for trans people. Tamsin also praised Workers World Party member Leslie Feinberg as a trailblazer for trans liberation.

Nikki Luellen, who works against police brutality, spoke eloquently about the horror that continues after people are murdered by the police. She cited the struggle of the spouse of Alva Braziel, who was shot and killed by Houston cops in the summer of 2016. Not a single cop has been charged, and the family is still fighting for justice. Luellen, a FRSO member and Texas Southern University student, works with Black Movement Media.

Speaking about several revolutionary women, Sabrina Smith, also with FRSO, focused on Yuri Kochiyama, a U.S. citizen who survived the U.S. internment of Japanese people in camps during World War II. Kochiyama became a strong advocate for Black, Latinx, Native American and Asian-American liberation. Her friend, Malcolm X, died in her arms at the Audubon Ballroom in 1965.

Gloria Rubac, speaking for Workers World Party, gave a history of International Women’s Day and its socialist origins. She explained that the material basis for women’s oppression was the beginning of class society, and how that oppression will only end when the capitalist ruling class is replaced by a socialist revolution.

FRSO leader Fabien Sneevliet updated the struggle of Rasmea Odeh, the Palestinian activist and former political prisoner in Israel facing a new U.S. trial for “immigration irregularities.” Odeh’s sentence was vacated, and experts will be allowed to testify on the role of torture in relation to her conviction.

During the discussion, Janie Torres spoke about her brother, Jose Campos Torres, who was murdered by Houston cops 40 years ago. She and her family are organizing the Second Annual Joe Campos Torres Solidarity Walk for Future Generations on the anniversary of his death in May. Torres invited Braziel’s spouse and her family to participate.   — Joanne Gavin

Several thousand women and supporters rallied and marched in San Francisco and Oakland, Calif., on International Women’s Day. The demonstration, titled “Gender Strike, Bay Area,” started at Chelsea Manning Plaza with a rally and then marched to the ICE Detention Center in downtown San Francisco. A strong chant was “No borders, no nations, no deportations.”

Later that night, another large rally gathered at Oscar Grant Plaza in Oakland. Organized by the Oakland Women’s Strike Organizing Collective, protesters marched to Sheriff Gregory Ahern’s office to denounce him. Ahern has announced he will continue to cooperate with ICE.

On March 11, a multinational rally and march of hundreds in San Francisco was led by GABRIELA SF, with the theme “Rise Against Fear, Resist Attacks on Our Communities and Unite for Self-Determination.”             — Terri Kay