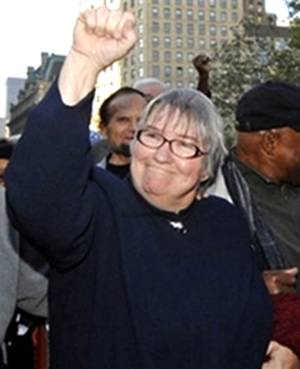 With deep sorrow we report that the courageous people’s attorney, Lynne Stewart, died on March 7. She spent more than four years behind bars for defending a blind Muslim cleric, and was released only after her cancer metastasized. Her death is mourned by many.

Workers World has learned that a viewing will be held on Friday, March 10, from 2 to 9 p.m. at Scotto’s Funeral Home in Brooklyn. Her funeral is scheduled for Saturday, March 11 at 9 a.m. at St. Mark’s Church on the Bowery. The following article, by Dolores Cox, was written after Lynne Stewart arrived at New York’s LaGuardia Airport after her release from prison in 2014.

New York, Jan. 1, 2014 — There she was, standing, and then walking slowly towards us, unshackled, without handcuffs or belly chain, and with a gigantic smile on her face. She was a sight for sore eyes, her inner and outer beauty reflected. Lynne Stewart’s family — her two children, who are attorneys; a daughter, who is a hospice doctor; grandchildren and great-grandchildren — along with her many supporters and attorneys were there. WBAI radio producers, independent photographers and videographers, Prison Radio’s Noelle Hanrahan and Amy Goodman of “Democracy NOW!” had also gathered inside LaGuardia Airport, waiting for what seemed like forever, to welcome Lynne home. There were 75 to 100 supporters there.

We had been waiting anxiously to see for ourselves what seemed to be too good to be true. Our Lynne, the people’s lawyer, woman warrior and courageous freedom fighter, finally was coming home.

And then, she emerged. It was a day that many had feared would never come.

We had been admonished several times by airport personnel not to block the elevator, staircase or passageway. But at the sight of Lynne and her spouse, Ralph Poynter, we could no longer contain ourselves. We rushed towards her, carrying cameras, signs and flowers as we chanted. With our big smiles and crying tears of joy, we surrounded her. Many hugs, kisses, “congratulations” and “thanks” were exchanged. Passersby whispered, “I wonder who that celebrity is they’re all greeting.”

When asked how she felt, Lynne said, “There ain’t nothing like freedom.” She talked about being very tired, and said that she was surprised about her release and that she had been getting to the point of giving up hope. She was notified of her approved release on the morning of Dec. 31, New Year’s Eve, by a phone call from her lawyer in France, and by prison officials. Everything happened quickly at that point.

Lynne laughed and stated, “When the warden told me I was leaving that day, he literally threw me out of prison.”

What had occurred during the previous 24 hours seemed unbelievable. First, we, her supporters, heard on the morning of Dec. 31 that the U.S. Justice Department had ordered that 74-year-old Lynne Stewart be granted a compassionate release due to her terminal illness. Her 10-year sentence for “aiding and abetting a terrorist organization” was also reduced to time served.

Since 2012, breast cancer has metastasized throughout Lynne’s body, due in part to delayed medical care in prison. Lynne had filed a written request for medical release at the beginning of 2013. Her doctors now say she has approximately 12 months to live.

During the course of one day, we witnessed what the Justice Department, the director of the Federal Bureau of Prisons and the Manhattan federal judge could have done a year ago or at least six months ago — namely, freed Lynne Stewart. They may have just decided that they didn’t want her to die in prison. That might incur some bad publicity for a so-called “democratic” country.

Former slave and activist Frederick Douglass described this oppressive state in his 1852 Fourth of July speech: “What, to the American slave, is your 4th of July? I answer: a day that reveals to him, more than all other days in the year, the gross injustice and cruelty to which he is the constant victim … your boasted liberty, an unholy license; your national greatness, swelling vanity … your denunciation of tyrants, brass fronted impudence; your shout of liberty and equality, hollow mockery … to him, mere bombast, fraud, deception, impiety, and hypocrisy — a thin veil to cover up crimes. … There is not a nation on the earth guilty of practices more shocking and bloody than … the United States, at this very hour.”

Lynne’s case is known internationally; it’s part of a global movement for social justice. We know that expecting the heartless to have a heart or evildoers to have a conscience is beyond reason and logic. The powers-that-be are utterly shameless.

As Dec. 31 unfolded, we learned that Lynne’s release from prison was imminent. Meanwhile, Ralph was airborne and on his way to Fort Worth, Texas, to visit Lynne as he had done routinely since her imprisonment there. It was not until after his plane landed, when he was on his way to the car rental desk, that he got the call informing him of Lynne’s fully approved compassionate release. One can only imagine how shocked he was when he got to the prison and saw Lynne sitting in a car in the parking lot.

At 9 p.m. on New Year’s Eve, Ralph walked into his hotel room with Lynne at his side. This moment was captured by fellow activist and producer Bob Lederer on the air at WBAI radio, when he telephoned Ralph to interview him about the day’s events. Unknown to him and the listeners was that he would also be speaking on the air with Lynne herself.

We were fortunate enough to see how Lynne’s release impacted Ralph the next day, when the plane carrying him and Lynne landed in New York City. Ralph was standing tall with Lynne, grinning from ear to ear. Lynne described her freedom and coming home as “sunlight bursting on me. Yesterday at this time I was deep in the dungeons. Prisons are loveless,” she said.

Lynne repeatedly expressed her gratitude for “the tremendous support from tens of thousands of people in New York, in the country and worldwide.”

Safe at home with her son in Brooklyn, where she will live surrounded by a loving family and friends, Lynne described her four years in prison as horrible. She told of how she barely survived the life-threatening chemotherapy treatments. She stressed that she won’t forget the women that she left behind in the prison, and that she’ll fight for criminal justice system reforms.

We also reflect back to this past summer and the many weeks that Ralph stood in front of the White House in Washington, D.C., in the rain and sweltering heat, with his signs, banner and leaflets; speaking to anyone who would listen about Lynne’s plight. He and a group of supporters protested in front of the U.S. Justice Department against the director’s refusal to approve Lynne’s request for compassionate release.

Ralph said he saw no acceptable alternative other than to fight like hell for Lynne’s release. His unwavering love, spirit, strength and determination were contagious. How could anyone knowing him or Lynne not join in the struggle? Or not give up?

Jan. 1 began a new year. What better way to start the year than to see the fruits of our labor realized? To have achieved a tortuous, long-fought-for victory? To see our hopes become a reality?

We dreamed what seemed the impossible dream, and saw it come true. The day seemed surreal. But we were believers once again.

Ralph joked about renting Yankee Stadium to celebrate Lynne’s return home. That idea notwithstanding, Lynne says we will definitely have a celebration party.

Lynne’s courage and principled stand have been inspirational. Ralph and Lynne took a firm stand against the government and the powers that be. Their position allowed us to stand, too, and fight back with and for them.

The road ahead will be anything but smooth. Lynne faces more medical treatment as she literally fights for her life. She will have to make appointments with Sloan-Kettering, the leading cancer center in New York City, and submit her medical records to them.

She says she “looks forward to beating the odds. I’ve fought lions and tigers, and I won’t let cancer get me.”

As we celebrate a victory over a tragic injustice, there are so many more victories to achieve. We must free all our political prisoners. Lynne urges us to take action on their behalf. She states: “Fight on, resist, resist. It makes life worth living. Power from the people made [my] release happen.” She adds that she’s “skeptical, but hopeful of better future changes.”

A better world is possible and we must make it happen. ¡La lucha continúa!

Here are a few of the many other articles from Workers World Newspaper – Workers.org on Lynne Stewart. They cover 13 years of Lynne’s trials, imprisonment, campaign to free Lynne, Lynne’s homecoming and reflections a year later.