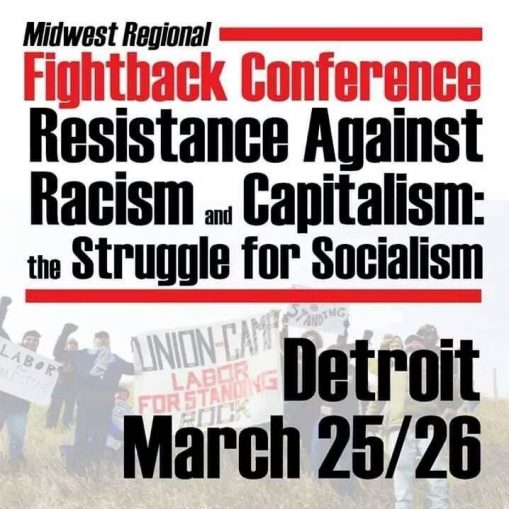 The Detroit branch of Workers World Party is co-hosting a Midwest Fightback Conference on March 25-26 with the Wayne State University branch of Students for a Democratic Society. WWP members from across the ravaged rustbelt will come together to put forward an analysis, forged in struggle, of the austerity, economic crises and national oppression that have come to characterize the region.

Guest speakers, such as the Venezuelan Consul General in Chicago and representatives of the Boston School Bus Drivers Union, United Steelworkers Local 8751, will help elevate these struggles and analyze both locally and beyond the Midwest, attacking imperialism at its very roots here and ­internationally.

Detroit was once an epicenter of working-class power and the Black Liberation struggle. Today it is at the heart of capitalist decay, financial dictatorship and genocidal national oppression. Though these assaults have permeated throughout the U.S., Detroit has long served as the frontline in the war against workers and oppressed people. Bankers, desperate for every last dollar of profit, imposed the largest municipal bankruptcy in U.S. history on the city of Detroit, looting hundreds of millions of dollars from the people.

Thousands of families have had their water shut off to help clear neighborhoods for corporate scum intent on colonizing the city. This ethnic cleansing was preceded by hundreds of thousands of home foreclosures in pursuit of the same goal. The devastation wrought to Detroit by Wall Street’s insatiable greed is very tangible and apparent. The homes, water, schools and communities of Detroit have all served as variables in an experimental project the ruling class wants to export throughout the U.S.

The Detroit branch of WWP and its allies in the community have challenged this massive offensive head on, organizing revolutionary intervention and direct confrontations with the might of finance capital. Long before the municipal bankruptcy began, the very nature of capitalist relations were challenged. WWP raised the slogan “Make the banks pay!” — a demand that became the rallying cry of the movement.

Before the bankruptcy, during years of the ongoing foreclosure crisis, WWP members and friends were in the communities physically preventing foreclosures when court struggles failed. Throughout this fight, activists maintained the demand for a moratorium on foreclosures and evictions, while raising legal precedents and analysis proving a moratorium is a feasible, no-cost demand. At every turn Detroit comrades have faced down the guns of finance capital, forging a revolutionary analysis of late-stage capitalism through this struggle.

Detroit WWP, our allies in SDS and other Midwest WWP cadre are holding this conference to bring our depth of experience to the new period we have entered. Many officials in the Trump administration are taking their devastating austerity policies from the Midwest to the federal level, giving our cadre in this region a unique perspective on the new attacks facing the workers and oppressed. The conference will also dive into the deep crisis of the imperialist empire, bringing analysis on conflicts from Syria to Africa and tying them to the war at home against racism, fascism and exploitation.

If you want to truly see the lengths capital will go to secure its profits, and the lengths the masses will go to resist, be in Detroit March 25-26 to hear it from revolutionaries on the frontlines.