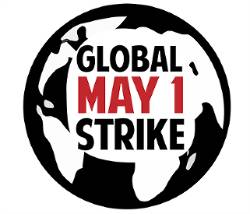 The ultra-rightist president of this country gave his first speech to Congress on Feb. 28. In the opening paragraph he employed liberal-sounding platitudes about “condemning hate and evil in all its forms.” He then laid out a program of tax giveaways and deregulation for capitalists, union-busting school voucher schemes, a federal worker hiring freeze (blaming immigrants for unemployment and low wages) and “one of the largest increases in national defense spending in American history.”

Trump left unsaid the obvious fact that the working class, especially the poorest and most oppressed, will pay for this massive giveaway to the military and corporations. Everything is potentially on his chopping block — from food stamps, Medicare and Medicaid, to the Environmental Protection Agency and the Occupational Safety and Health Administration.

One would expect even the moderate labor leaders in this country to issue a swift condemnation. AFL-CIO President Richard Trumka or Change to Win General President James Hoffa Jr., who is also Teamsters president, could have shredded the ludicrous claim that “American companies are taxed at one of the highest rates anywhere in the world.” In fact, General Motors, General Electric, Pfizer, Citibank and others have managed to shield billions in profits from taxation and even obtain tax credits.

Yet the day after the speech Trumka stepped into the studios of Fox Business News and called the speech “one of [Trump’s] finest moments.” He gave the president credit for the demise of the Trans-Pacific Partnership, knowing full well that the anti-worker trade agreement was already dead before Trump took office.

Worst of all, Trumka agreed with the racist lie that immigration brings down wages!

Trumka is not alone in his treacherous positioning. In January, days after the inauguration, Hoffa made back-to-back statements praising Trump for having “taken the first step toward fixing 30 years of bad trade policies” and for “executive orders today that will advance the construction of the Keystone XL Pipeline and the Dakota Access Pipeline, creating thousands of good union jobs.” Even before the president took office, leaders of the Building Trades unions, autoworkers and steelworkers unions all expressed a willingness to “give Trump a chance.”

This accommodationism is a throwback to the racist craft unionism of Samuel Gompers, who founded the American Federation of Labor in 1884. Except for a brief one-year interlude, Gompers was president-for-life until his death in 1924. Though British-born himself, Gompers supported anti-immigrant legislation and advocated its strict enforcement, from the 1882 Chinese Exclusion Act to the 1924 Immigration Act.

After Gompers’ death, William Green maintained the divisive orientation. Green denounced the heroic sit-down strikes of the 1930s and red-baited the Congress of Industrial Organizations, which organized the unorganized after splitting from the AFL in 1935. Green too served as president-for-life until his death in 1952.

It was Trumka’s United Mineworkers, under the former leadership of John L. Lewis, that led the breakaway from the AFL. But now Trumka epitomizes that conservative, class-collaborationist tradition. Class-collaborationists behave as if by making nice with the class enemy — through “labor-management cooperation” — they can bargain a few more crumbs for their membership.

This current has dominated the U.S. labor movement since the purging of left unions and leaders during the McCarthy era. Not long after the purges, the AFL and CIO reunited under the third president-for-life, George (“I never walked a picket line”) Meany.

By the 1980s, making concessions during bargaining became the labor movement norm. The capitalist class used the bargaining process to intimidate unions into giving up what they had fought for in the past. Union leaders peddled givebacks to their membership in order to keep U.S. companies profitable or “competitive.” Workers were led to believe they could lose jobs if they fought back.

Now Trumka, Hoffa and their ilk have taken class-collaboration to its extreme manifestation. Going beyond partnership with individual companies, Trumka used the word “partner” to describe working with the fascistic administrator of the capitalist state on trade issues.

Many rank-and-filers are disgusted. If the labor “leader” fakers continue on this disastrous, suicidal course, they could find themselves walking past a picket line to get to their own plush offices.

Even as hyper-speculation pushes the stock market to unseen heights, wages are falling, inflation is killing workers’ budgets, and millions are still unemployed and underemployed. Organized labor should be among those “Shutting Shit Down.” Trump’s plan to cut federal jobs should be answered by a demand for a shorter work week — with no cut in pay — to spread the work to more people.

Even with only about 10 percent of the U.S. working class in unions, labor represents millions of workers strategically positioned to bring the economy to a standstill. What a crisis it was for Wall Street during the last New York City transit strike!

If the labor movement supported a call for a general strike, not only for their own members but the whole working class, it would provide a safety net for all workers who walk out. It would say to immigrants and low-wage workers: If you are courageous enough to risk your jobs by walking out on May Day, organized labor has your back.

There are voices that support this orientation. SEIU United Service Workers West, representing over 40,000 property service workers across California, issued a statement that reads in part: “It’s time to stand up as a people against fascism and autocratic leadership.

“This is a call to all working people, to all communities: Join us in the streets in a general strike on May 1, 2017!

“The time has come to shut it down!”