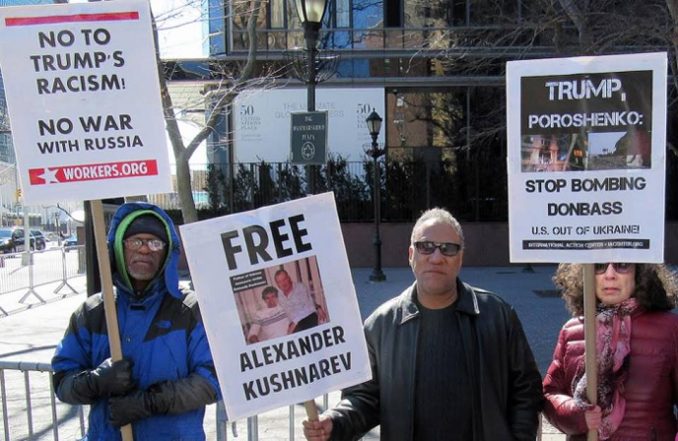 Opponents of the U.S.-Ukraine war against the Donbass region of eastern Europe picketed in frigid weather at United Nations headquarters in New York on March 5.

They chanted: “No NATO! No Trump! U.S. out of Ukraine!” Signs demanded: “Trump, Poroshenko — Stop bombing Donbass” and “Down with oligarchs and fascists from Kiev to Washington.”

The protest was part of the International Day Against Genocide of People in Donbass, held in at least 16 cities worldwide. Demands included an immediate end to Ukrainian military attacks on the independent Donetsk and Lugansk republics; an end to the economic blockade of the Donbass region; that the international community force Kiev to respect the terms of the Minsk peace agreement; and an International War Crimes Tribunal for Ukrainian President Petro Poroshenko.

In New York, activists also raised the case of Alexander Kushnarev of Odessa, who was detained by the Kiev regime on Feb. 23. He is the father of Gennady Kushnarev, one of 48 anti-fascists killed by Ukrainian nationalists on May 2, 2014, at the Odessa House of Trade Unions.

Larry Holmes of Workers World Party emphasized: “We are opposed to the [U.S President Donald] Trump regime and its attack on the workers and oppressed here and around the world. And we are opposed to the campaign by Trump’s bourgeois opponents to whip up a war fever against Russia and our brothers and sisters in Donbass. International solidarity against imperialism is essential to stopping the threat of a wider war.”

The New York action was called by the International Action Center.