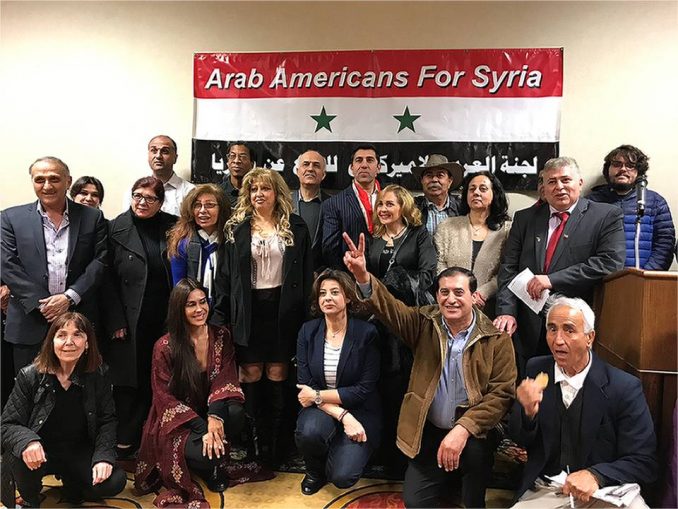 Some of the
forum attendees, Feb. 26.

Hollywood was giving an Oscar to the Netflix propaganda documentary “White Helmets,” which has been exposed many times as a piece of fiction promoting terrorists serving the interests of U.S. imperialism and Saudi Arabia. The same day, Feb. 26, Arab Americans for Syria (AA4Syria) sponsored a real documentarian on the Syria crisis at a forum in Los Angeles County at the Holiday Inn in La Mirada. 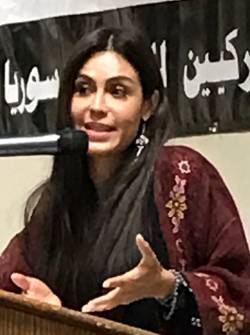 Carla Ortiz, Bolivian actor and filmmaker known in the U.S., Latin America and Spain, spoke about her new documentary on the Syria crisis. She also gave eyewitness testimony reflecting her wide travel throughout Syria before, during and after the armed conflict. This included the Syrian army’s liberation of Aleppo from U.S.- and Saudi-funded mercenaries.

Ortiz gave detailed eyewitness knowledge of the crisis and brutality perpetrated by mercenaries, most of whom are not Syrian. She cut through the lies manufactured by the U.S. government with the help of nongovernmental organizations like Amnesty International, Human Rights Watch and others. These organizations never put a foot in Syria, but instead use information supplied by so-called rebel forces that the U.S. and Saudi Arabia back.

Johnny Achi, founder of AA4Syria, and John Parker of the International Action Center, who were both part of an earlier fact-finding delegation to Syria, also spoke at the event.