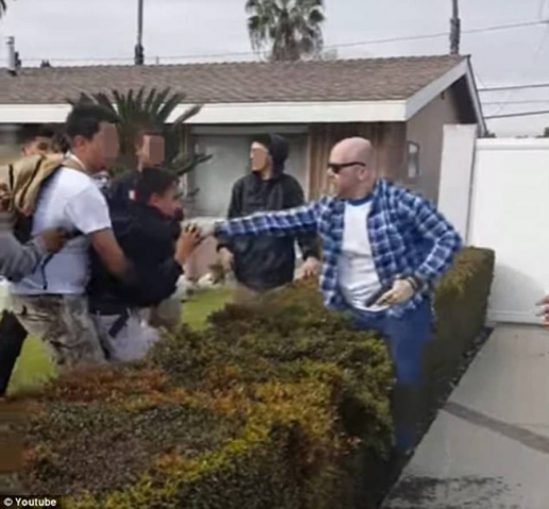 Los Angeles – A mixed group of Anaheim students were walking home from school on Feb. 21, when an off-duty Los Angeles police officer verbally harassed one of them for allegedly walking on his lawn and then grabbed 13-year-old Christian Dorscht. Videos of the incident show the white officer, Kevin Ferguson, who is at least a head taller than the youth, grabbing Dorscht’s body and clothing and dragging him toward his house as the student attempts to break away. (tinyurl.com/hz72z7z)

Dorscht says the off-duty cop hit him in the genitals while dragging him away from his friends. He asked Ferguson to show proof of his claim that he was a police officer and informed his attacker he would sue him, which the cop then claimed was a threat to “shoot” him. During the kidnapping, Dorscht’s resolute school companions did not abandon him. They protected their friend, calling out, “Let him go!” and recording the belligerent officer cursing at them.

One video shows that as Ferguson attempted to make away with Dorscht, dragging him through the yard, two of the student’s friends made a gallant rescue effort: one child attempted to pull the officer’s hand off Dorscht while another rushed him, trying to push him away. At this point, Ferguson pulled out his gun and discharged it, only inches away from several children.

Meanwhile, the police were called in. Although this was an active hostage situation involving children, when the LAPD arrived they did not arrest Ferguson, who was still holding onto Dorscht. Instead, they arrested two of the children.

After this disgusting incident, hundreds of protesters claiming child abuse and endangerment, child abduction, and illegal use of a firearm and assault, came out to support Dorscht the next day, Feb. 22. They openly condemned the officer’s reckless actions and demanded justice from the historically racist and violent Anaheim Police Department. Police arrested 24 of the protesters.

The only thing done to the officer was to place him on leave. More than a week later, no charges have yet been pressed against him.

Damion Ramirez from the Young Survivors — Legacy Support Network was there to support the action. “The power of united people that day was overwhelming. Every single one of us rushed to defend a child who could be our own son, brother, friend. We in the movement to end police terror were inspired by the courage it took for a young Black brother to risk his life to save a young Brown brother from a stranger bullying him in the manner of every cop who is the problem,” said Ramirez.

A YouFund campaign to help cover Dorscht’s legal fees has raised almost double its expected goal and his family plans to sue Ferguson for attempted abduction. Dorscht suffered injuries to his neck, head and face while being dragged away by Ferguson.