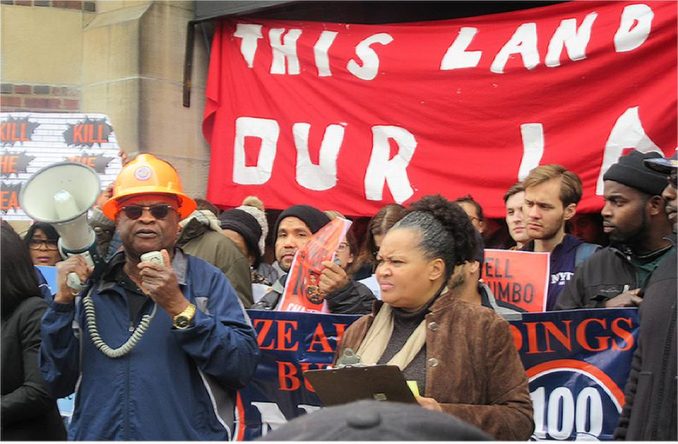 “BFC has got to go!” demanded a leader in Construction and General Building Laborers’ Local 79, speaking on behalf of the union. Referring to the nearby campus of the City University of New York, Medgar Evers College, he said Civil Rights leader “Medgar Evers wouldn’t stand for this!”

Evelyn, a tenant leader from nearby Ebbets Field Housing, also spoke. Her huge housing complex — formerly home field of the Brooklyn Dodgers before they left for Los Angeles in 1958 — once had 600 tenants. Now the complex has lost 160 tenants to unfair displacement. The threat of eviction today is mainly directed against immigrant tenants.

Soon the armory rally became a march in the streets to the office of missing City Council member Laurie Cumbo. Since Cumbo holds the single vote that can cancel the rezoning bill for the Bedford-Union Armory and stop the developers from getting it, the Brooklyn marchers repeatedly chanted, “Kill the bill!”