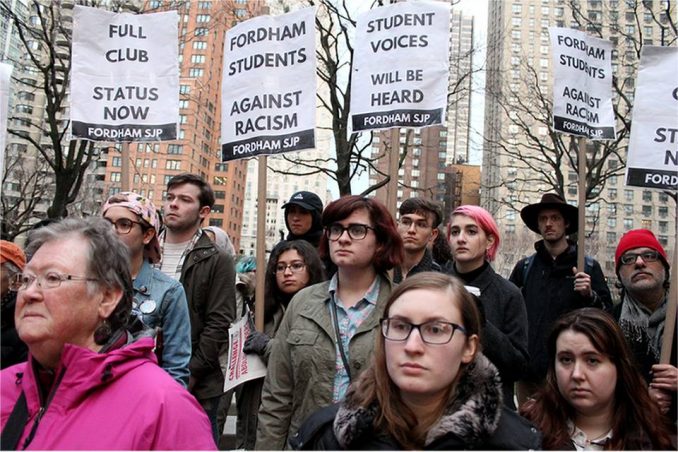 New York – Members and supporters of Students for Justice in Palestine rallied at the Manhattan campus of Fordham University on Feb. 21 to denounce Dean of Students Keith Eldredge’s threat of disciplinary action against SJP lead campus organizer, senior Sapphira Lurie.

The following morning, Lurie refused Eldredge’s demand that she meet him alone inside his closed office, with a white noise machine obscuring any sounds, and left in protest.

“It’s unconscionable that Dean Eldredge, citing made-up policies, prevented a student from providing her side of the story because she felt unsafe,” said Radhika Sainath, a Palestine Legal staff attorney and cooperating counsel at the Center for Constitutional Rights. (palestinelegal.org)

Eldredge sent Lurie a written reprimand on Feb. 23 for violating “University regulations pertaining to the Demonstration Policy” at a campus rally a month earlier.

At the Jan. 23 demonstration, SJP activists and their supporters protested Fordham’s refusal to allow the group to register with the university, after over a year of bureaucratic wrangling, and criticized Eldredge’s handling of the conflict.

Completing the circle, Eldredge, who blocked SJP’s bid to gain university recognition a month before, had also been the protest’s target and the object of its chants and speeches.

In a Dec. 22 email, Eldredge wrote that the group’s support for “the call for Boycott, Divestment and Sanctions of Israel presents a barrier to open dialogue and mutual learning and understanding.” (insidehighered.com, Jan. 18)

The unprecedented attempt to suppress a specific perspective on campus drew condemnation from not only Palestinian and solidarity activists, but also civil liberties advocates from the Foundation for Individual Rights in Education.

Jewish Voice for Peace, a national activist organization, has asked supporters of SJP to call Fordham’s administration, demanding that it end its ban on the group and stop retaliating against students for participating in its activities (tinyurl.com/hutc9tp). Those who do not use the internet can call Eldredge at 212-636-6250, as well as Fordham President Rev. Joseph M. McShane, S.J., at 718-817-3000, or write to them at Fordham University, 33 W. 60th St., New York, NY 10023-7905.