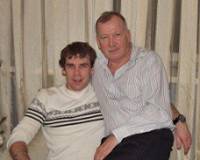 On May 2, 2014, at least 48 anti-fascist protesters were murdered by right-wing Ukrainian nationalists at the House of Trade Unions in Odessa, southeastern Ukraine. Those killed had opposed the right-wing coup that had recently taken place in the country’s capital, Kiev, with active support from the U.S. government.

Union Borotba (Struggle), the Marxist organization which issued this statement, was outlawed by the new regime and now operates underground. This statement was translated by Workers World contributing editor Greg Butterfield.

On Feb. 23, a flagrant event happened in Odessa: agents of the Security Service of Ukraine arrested Alexander Kushnarev, the father of anti-fascist Gennady Kushnarev, who was slain on May 2, 2014.

He is accused of organizing the kidnapping of Parliament Deputy Alexei Goncharenko, who was photographed posing with Gennady’s body on May 2.

Alexander Kushnarev, like the other relatives of the House of Trade Unions dead, is a major obstacle to the Ukrainian government, which is trying to cover up the massacre that occurred on May 2, 2014, in Odessa.

These relatives refuse to be silent about this tragedy. They hold memorial rallies, produce literature about the events of May 2 and knock on the doors of all international human rights organizations.

Such activity by the relatives of the dead is a “sore spot” for the Ukrainian authorities, as it prevents them from presenting Ukraine to the international community as a democratic country.

In order to silence these people, the regime took a vile step: using the grief from the loss of his son, they set up the father of the deceased anti-fascist to seek revenge. For greater resonance, the chosen target was a deputy of the Ukrainian Parliament who took part in the suppression of the opposition on May 2, 2014 — Alexei Goncharenko.

To be fair, it must be said that Alexei Goncharenko didn’t kill anyone, nor was he the organizer of the massacre. However, he was the one who reported the victory of pro-government forces during the live broadcast on the country’s main TV networks. He did this against the background of the dead Gennady Kushnarev. As a result, the hatred of Odessa residents for this personality is extremely great.

The problem goes even deeper. This situation was made possible because the investigation of the mass murder at the House of Trade Unions by law enforcement agencies was sabotaged. For nearly three years, Odessa anti-fascists have languished in Ukrainian prisons.

Meanwhile, the murderers who executed those who leapt from windows to escape the burning building, including those who shot peaceful citizens of Odessa, are still at large. It is this absence of justice which makes people seek justice on their own.

The authorities provoked this act intentionally to have an excuse to arrest other activists of the anti-fascist movement. And so, immediately after the arrest of Alexander Kushnarev, searches began of the homes of activists of Kulikovo Field.

We appeal to all concerned people for solidarity! We ask you to organize pickets and rallies outside Ukrainian embassies and consulates, as well as in the streets of your cities!

We ask for the maximum circulation of the information that the Ukrainian government, after assassinating the anti-fascists, wants to imprison their parents!

We will seek the release of Alexander in all international legal bodies, and in case of failure — through prisoner exchange.

We will not allow them to silence the May 2 massacre in Odessa!

Borotba is always on the side of those who think and fight!