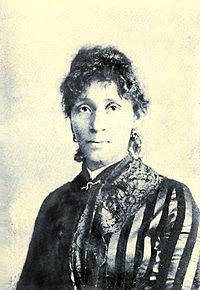 The class struggle was at fever pitch in Chicago in 1885. Unemployment was high, wages were low, and food prices were rising steeply. On April 28, thousands of workers expressed their anger over spreading hunger by demonstrating against a lavish dinner celebrating the opening of the new Board of Trade building.

The workers, mostly European immigrants, filled LaSalle Street, chanting against price-fixing, speculation and the injustice of starvation amidst so much wealth. At their head, proudly ­carrying a red flag, marched Lucy Parsons, an ­African-Native-Mexican-American woman who devoted her life to fighting poverty, racism, sexism and capitalism.

Parsons was born a slave in Texas in 1853. In 1871, after emancipation, she married Albert Parsons, a white Reconstruction supporter involved in registering Black voters. The rise of Klan terror at the end of Reconstruction led the young interracial couple to move to Chicago in 1873.

Chicago was in turmoil. Thousands had been left homeless and destitute by the great fire that destroyed the city two years earlier. Millions of dollars donated to help the victims had been “borrowed” at no interest by big businessmen on the relief society’s board of directors, including George Pullman and Marshall Field, to invest in their own companies. News of this theft led 10,000 workers and unemployed to protest at City Hall, Parsons’ first big demonstration.

Albert found work as a printer and got involved in trade union organizing and socialist politics. He helped found the Knights of Labor, the first big national labor federation in the U.S. Socialist meetings were held at the Parsons’ apartment, where Lucy learned about labor history and socialist theory.

In 1877, railroad workers struck nationwide, and many were massacred by federal troops in Chicago. Parsons saw firsthand that the state, far from neutral, always sided with the bosses. She also saw her spouse get enough votes for local office as a candidate of the Workingmen’s Party, only to have it stolen from him by massive fraud. She learned that militant action, not electoral politics, had to be the main vehicle for social change.

Parsons began to write for working-class newspapers and to speak publicly for the Working Women’s Union, exposing the horrors of factory life and the oppression experienced by women servants. An outstanding orator, she explained that only the revolutionary overthrow of the capitalist system could overcome this suffering.

She organized seamstresses into the Knights of Labor to fight for the eight-hour day. She joined the International Working Peoples Association, an anarcho-syndicalist organization that made one of its six founding principles: “Equal rights for all without distinction as to sex or race.”

She performed all this activity while maintaining a small dress shop to help support her two children.

On “Thanksgiving” Day 1884, Parsons led thousands of unemployed down Prairie Avenue, an exclusive street lined with the mansions of such leading capitalists as George Pullman, Philip Armour, Gustavus Swift, Cyrus Hall McCormick and Marshall Field III to dramatize how little the poor had to be thankful for. The workers rang doorbells and hurled angry epithets at their exploiters.

Giving birth to May Day

The movement for an eight-hour day began to grow rapidly over the next two years. The murders of peacefully striking picketers at the McCormick reaper plant May 3-4, 1886, culminated in the famous Haymarket rally and frame-up of working-class leaders, including Albert Parsons. These events are still commemorated by workers around the world on May 1 or May Day.

Lucy organized support for her jailed spouse and his colleagues, speaking to large crowds in 17 states, while doing extra sewing to support her family. After the trial, a New York paper urged that “Parsons be let out as a compromise to get Mrs. Parsons to stop talking.”

In fact, Lucy herself was often arrested and harshly treated. Indeed, on the morning of the executions, she and her children were stripped and thrown naked into a jail cell and released only after the hanging. The next day, Albert’s coffin was brought to her apartment. Overcome by emotion, she found the strength to retrieve the red flag she had carried in the Board of Trade demonstration, which she draped across Albert’s body.

Ten thousand workers filed through the Parsons’ apartment during the night to view the body. The next day, over 200,000 people lined the streets for the funeral procession of Albert and his fellow martyrs.

Devotion to workers and oppressed

Lucy Parsons organized against the U.S. imperialist war with Spain in 1898. She was active in every major 20th-century workers’ defense case, including those of Big Bill Haywood, Sacco and Vanzetti, and Alabama’s Scottsboro Brothers. She was an original member of the Socialist Party, wrote a weekly column for the Industrial Workers of the World and distributed communist literature. She supported the Russian Revolution of 1917, breaking with anarchist colleagues.

In her articles and speeches, Parsons repeatedly addressed the specific oppressions faced by Black people and women. She campaigned against racist lynchings and criminal injustice, and fought for women’s suffrage, equal pay, birth control access and abortion rights. In the 1920s, the Chicago Police Department described her as “more dangerous than a thousand rioters.”

In the 1930s, Parsons, close to 80 years old and too poor to afford a nickel for a streetcar, walked regularly six miles to downtown Chicago to sell socialist and communist pamphlets. She could still be counted on for every major picket line and rally against capitalist injustice.

Her main focus continued to be organizing the unemployed, frequently taking the lead in hunger marches. She helped formulate the sit-down-strike tactic, urging strikers not to “go out and starve, but to remain in and take possession of the necessary property of production.”

In 1941, at one of her last public appearances, Parsons spoke to strikers at International Harvester, successor to the company that had provoked the Haymarket events 55 years earlier. She stressed the continuity of the struggle against the capitalists and the police, urging the workers to keep fighting till victory.

Lucy Parsons died in 1942. Virtually blind by then, her wood stove caught fire and she was trapped in the burning house. As a final indignity, the FBI stole her historically valuable library of 1,500 books and personal papers.

Parsons was a woman of color who became an extraordinary leader in the struggle for the liberation of the workers, oppressed and women. Her spirit lives on today in the new generation of women fighting for liberation and socialism. She merits remembrance on International Women’s Day. Her militant legacy remains feared by her foes. In 2004, the Fraternal Order of Police tried, but failed, to stop the naming of a Chicago park after Lucy Parsons.

This article ran originally in WW on Sept. 6, 1984. There are a number of biographies of Parsons for further reading, but a primary source is “Lucy Parsons: Freedom, Equality & Solidarity — Writings & Speeches, 1878-1937.”