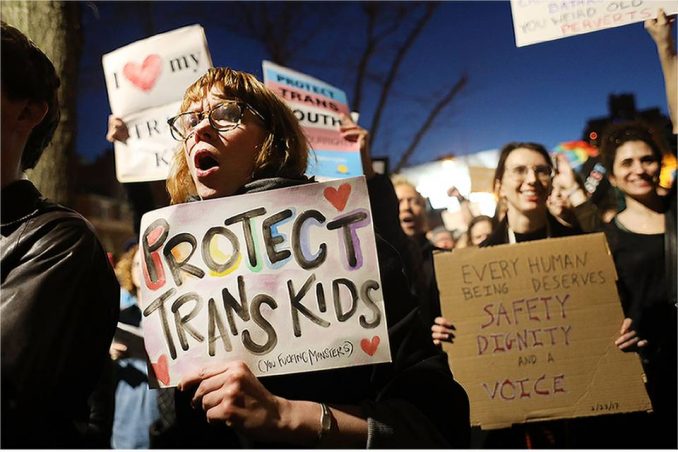 Protests against the Trump regime erupted across the country once again on Feb. 23 in response to the administration’s rollback of protections for transgender students in public schools.

A Feb. 22 executive order issued by the Trump-appointed Department of Justice and Department of Education instructs public schools to disregard an earlier order issued by the Obama administration providing guidance on how to accommodate trans students in single-sex restrooms. The Obama executive order, which only provided “significant guidance” and did “not add requirements to applicable law,” instructed public schools to allow transgender students to use whichever restroom is most in accordance with the individual student’s gender identity.

In reality, Obama’s order only suggested that public schools not endanger trans students by forcing them into the wrong restrooms and locker rooms, while Trump’s order takes back this common sense suggestion. Neither executive order carries the force of law. However, the Trump order in effect gives the green light to school officials to openly discriminate against transgender and gender-nonconforming students.

The Trump order appears to have exposed some political divisions within the administration. According to a Feb. 22 New York Times article that wrote of her differences with Attorney General Jeff Sessions, “[Betsy] DeVos initially resisted signing off and told Mr. Trump that she was uncomfortable because of the potential harm that rescinding the protections could cause transgender students, according to three Republicans with direct knowledge of the internal discussions.”

A Slate.com Feb. 22 editorial reported: “Yes, [DeVos] ultimately caved, and she remains either terrible or ignorant on most other issues. But she also forced the trans question all the way to the Oval Office, compelling Trump to issue a direct verdict rather than delegating the unseemly task to his bigoted attorney general.”

What does this difference mean?

In reality, the so-called struggle between DeVos and Sessions isn’t left-versus-right, or even moderate-versus-reactionary. DeVos has no history of caring about trans students, whose right to an education free from discrimination she actively opposes.

DeVos and Sessions, along with the entire two-party system, are united behind Trump’s racist, anti-trans and anti-worker program of war and austerity.

Both Sessions and DeVos fully intend to carry out Trump’s war on oppressed people, both in the U.S. and abroad, even if they differ on tactics. Progressives in the U.S. should recognize the opportunity offered by this division in the ruling class without overestimating it. Now’s the time to build an anti-racist, anti-capitalist united front against the entire ruling class!

Not DeVos, not the “moderate” Republicans and certainly not the Democrats are allies of workers and the oppressed. But the discord that currently exists between these ruling-class groupings will make any united political action by progressives all the more bold and powerful.

Disclosure: The writer is a transgender public community college student who occasionally has to use the bathroom.