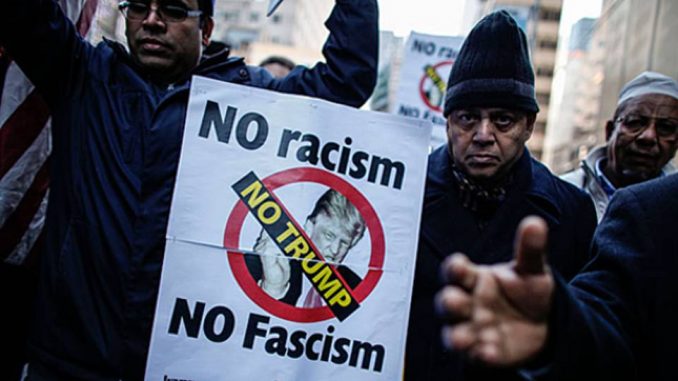 Feb. 27 — As the Trump administration opens up new attacks on the masses, the split between the White House and the capitalist establishment is growing ever sharper.

The head of the Department of Homeland Security, John Kelly (retired general, U.S. Marines), has signed sweeping memos that vastly expand the definition of undocumented immigrants immediately subject to deportation. Random arrests have taken place across the country. Fear is stalking neighborhoods from Long Island to Los Angeles to Chicago and the border areas. Immigrants are afraid to get in a car or go to the store for fear of being snatched by Immigration and Customs Enforcement agents. Coming across the border is now considered a deportable crime. This applies to 11 million people.

In addition to deportations there is an escalation of arbitrary harassment. For example, Muhammad Ali Jr. and his mother were stopped at a Florida airport and held for two hours because of their Muslim names. A holocaust scholar from Paris who was born in Egypt narrowly escaped deportation. An undocumented worker, Sara Beltran Hernandez, who was hospitalized for treatment of a tumor in Texas, was seized by border control agents and put in a detention center. Incidents such as these are multiplying across the country.

Meanwhile, Trump is scheduled to address a joint session of Congress on Feb. 28 at which he will announce the Trump/Bannon budget. Stephen Bannon is an ultra-rightist and the president’s top advisor.

Advance advertising about the budget calls for a $54 billion increase in military spending, which currently stands officially at $584 billion. The proposed increase is 9.2 percent. (This excludes the Energy Department, which oversees nuclear weapons.)

“An official familiar with the proposal said Trump’s request for the Pentagon included more money for shipbuilding, military aircraft and establishing ‘a more robust presence in key international waterways and choke points’ such as the Strait of Hormuz and South China Sea.”

The push to expand the military off the coasts of China and Iran flows from Bannon’s worldview that there will be wars in the Middle East and the South China Sea within the next 10 years.

Washington already has the largest military budget many times over than any other country. Furthermore, it is not now engaged in any major wars of a conventional character. One can only speculate that this military budget is preparation for future major military adventures.

The expansion of the military budget is also a resort to the time-honored method of creating jobs, a pledge Trump has been saying over and over since his campaign began. High-tech warfare is technology-intensive and does not produce many jobs. But Trump’s preparation for conventional battlefield, air and sea warfare is part of his jobs program. He is also trying to build political support among the military-industrial complex, both the brass and the corporations.

Bannon and the ‘Strategic Initiatives Group’

The budget may not survive as projected by Trump. But it has Bannon’s fingerprints on it, reflecting his warlike ideology. To further these militaristic goals, as well their anti-immigrant goals, he and Trump have created a behind-the-scenes group, parallel to the National Security Council. This body is called the Strategic Initiatives Group.

The NSC is supposed to be the authoritative body that advises on policy and intervention all over the world. It has been the traditional forum for  mainstream capitalists, their foreign policy establishment and spy agencies — e.g., the State Department, the Pentagon, the CIA, etc. The NSC is traditionally the most powerful body advising the president on policy.

The Strategic Initiatives Group is supposed to be a “think tank” inside the NSC, but in fact it is a select group inside the White House. It consists of Bannon, Jared Kushner (Trump’s son-in-law), Steven Miller and other unnamed Breitbart loyalists. One of them, Sebastian Gorka, is the son of an anti-communist Hungarian refugee who was decorated by the Nazis. The son is a fanatical Islamophobe who has been photographed wearing his father’s Nazi medal. (thedailybeast.com, Jan. 31)

Despite its think tank cover, the SIG makes policy proposals, such as the refugee travel ban, among other things. It circumvents the State Department, the CIA, the Joint Chiefs of Staff and other organs that are supposed to be in the loop. It is a dangerous cabal. While this cabal suffered a severe setback when three courts ruled against the travel ban, the Trump/Bannon group is trying to reinstate the ban.

Bannon and the SIG operate independently and in opposition to the establishment agencies. For example, just before Vice President Michael Pence was to go to Brussels to affirm the Trump administration’s support for the European Union, the German-dominated federation of European states, Bannon had a lengthy telephone conversation with the German ambassador to the U.S.

According to a Feb. 21 article in Reuters: “[S]ources described a longer meeting in which Bannon took the time to spell out his world view. They said his message was similar to the one he delivered to a Vatican conference back in 2014 when he was running the right-wing website Breitbart News.

“In those remarks, delivered via Skype, Bannon spoke favorably about European populist movements and described a yearning for nationalism by people who ‘don’t believe in this kind of pan-European Union.’”

Shortly before this conversation, Peter Navarro, the head of Trump’s National Trade Council, accused German bankers of being currency manipulators. This came as a shock in Berlin. It is undoubtedly part of an attempt to sharply escalate antagonisms with German finance capital. Navarro is also a currency hawk against China.

This is part of the Bannon/Trump strategy to maneuver with Russia while fulfilling Bannon’s nationalist line.

Similarly, Trump has been repeatedly quoted about “taking Iraqi oil.” Secretary of Defense James Mattis (retired general, U.S. Marines) had to go to Iraq and disavow any intention to take Iraq’s oil. Of course this was a lie; the entire Iraq war was about trying to get Iraq’s oil. (The effort failed.) But Mattis had to cover up for Trump’s public belligerence.

Secretary of State Rex Tillerson and DHS Secretary John Kelly went to Mexico to smooth out relations after Trump told President Enrique Peña Nieto that Mexico would have to pay for a wall and that the U.S. would send troops to “clean up bad hombres” there.

During his campaign Trump said that Japan and south Korea should develop their own nuclear weapons because the U.S. shouldn’t have to pay for them. This called into question the inter-imperialist alliance in Asia. Mattis had to go to Seoul and Tokyo to reaffirm U.S. alliances with both countries.

Trump met with Israeli Prime Minister Benjamin Netanyahu without the secretary of state. He then told a press conference that he was for a one-state solution to the Palestinian question. This was a sharp departure in words (not deeds) from decades of U.S. official policy.

Nikki Haley, Trump’s U.N. ambassador, then had to state categorically at the U.N. that Washington stands “firmly behind” a two-state solution.

In short, the Trump/Bannon worldview is in struggle with the mainstream military/imperialist view. The mainstream view is rooted heavily in the policy of surrounding Russia in alliance with the NATO powers and pushing into central and Eastern Europe.

This conventional U.S. worldview is also rooted in gradually ratcheting up pressure on China by moving military assets to the Pacific and arming both Japan and south Korea. At the same time, Wall Street and the transnational corporate monopolies have steadily invested in China and built up global supply chains that depend upon stable U.S.-China relations.

The mainstream view is an Atlantic/Pacific strategy of U.S. imperialism that has been built up over decades.

Beware the ‘adults in the room’

Many liberals and even moderate Republicans were overjoyed when Lieutenant General H.R. McMaster was appointed to replace Islamophobe Michael Flynn as Trump’s National Security Adviser.

McMaster is supposed to be a no-nonsense general who has a record of speaking truth to power — that is, telling civilian authorities to stop trying to manage the military in matters of warfare. McMaster, General Kelly, General Mattis and Tillerson are supposed to be the “adults in the room” who will deal with immature, out-of-control Trump and his fanatical adviser Bannon.

However, to look to these Pentagon generals and Tillerson, the former CEO of the largest private oil company in the world, to protect the progressive interests of the masses in the face of Trump is a dangerous and foolish course.

If the generals are opposed to the Trump policy, it is only because they fear he will ruin their plans to dominate the Middle East, Eastern Europe, China and the rest of the world. The military and the oil companies are cunning and deceitful in their plans for global domination.

They are not “adults” to be relied upon. They are enemies of workers and oppressed peoples worldwide. They are the architects of military intervention and aggression around the world. Their goal is conquest and imperialist expansion.

“Deconstructing the administrative state” is the phrase Bannon uses to describe sweeping away all institutional protections for the masses, for the environment, for women, immigrants, people of color, the poor and all who are victimized by the workings of capitalism and capitalist politics.

Whatever rules and regulations exist to slow down the aggression of capital against the people, or to institutionalize the gains they made in the struggle, are in most cases in the regulatory agencies. One look at Trump’s cabinet appointments for the domestic agencies shows that he and Bannon mean to pulverize all the regulatory protections that exist for society as a whole.

To pay for the $54 billion increase in military spending, the offset is going to come from deep cuts in the budgets of the State Department and all the domestic regulatory agencies. This is why Trump’s cabinet picks for Education, the Environmental Protection Agency, the Department of Health and Human Services, Department of Housing and Urban Development, etc., are all people who want to destroy the fundamental missions of the very departments they are supposed to lead.

If Trump and Bannon are to be stopped, they must be stopped by the mobilized masses — in the communities, in the unions, on the campuses, in the factories and workplaces. A united movement of organized workers and the oppressed acting militantly will interfere with and halt the plans of this reactionary cabal.

Goldstein is the author of Capitalism at a Dead End and Low-Wage Capitalism. Both are available via online booksellers.