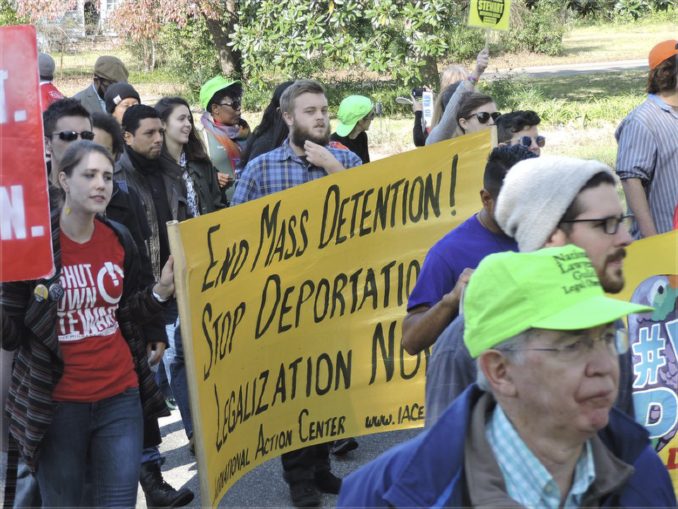 A wave of terror is hitting the migrant and refugee communities in the United States. Violent roundups are being carried out at this very moment by the Trump administration, pushed by the racist ideology coming from Trump and the likes of his chief strategist, arch-reactionary Steve Bannon.

Immigration and Customs Enforcement agents from the Department of Homeland Security are being unleashed around the country, aimed especially at Black and Brown people in every small town and large city where communities of migrants live.

The results are a cruel and ominous attempt to demonize immigrant workers, expel both the undocumented and documented from this country, and instill such fear that workers not rounded up are driven so deeply underground they virtually “disappear.”

Some immigrant advocates liken it to a police state being imposed on immigrant workers.

The Trump administration announced on Feb. 21 plans to carry out his longstanding campaign goals on immigration.

The current guidelines were announced even as a second draft of Trump’s order banning people from mainly Muslim countries is awaited. Fortunately, his first attempt was knocked down by the people’s movement and by those among the capitalists who profit from a more open immigration policy.

The administration’s goal is to carry out and enforce immigration laws much more aggressively than before. They aim to unleash the full force of the government to “find, arrest and deport” the undocumented.

The administration says it wants to “unshackle” the power of ICE agents — an ironic term, as they clearly are itching to shackle immigrant workers.

Despite some liberal propaganda, this campaign is nothing new in U.S. history.  During economic booms, the capitalist class welcomes cheap, vulnerable labor. During hard times when undocumented labor is not as needed, there’s a campaign to demonize and deport.

But the Trump administration takes this anti-worker campaign even further.

Here are some of the proposals in Trump’s new guidelines: The Trump directive will strip immigrants of privacy protections guaranteed in the past. Other administrations provided some legal protections for information collected by DHS. It was not shared with other agencies, such as the Internal Revenue Service. But it will be now. Alleged crimes will now be publicized. According to immigration lawyers, this jeopardizes those who had applied for legal status, as the alleged information turned in can now be used to deport them.

The guidelines will revive Section 287(g) of the Immigration and Nationality Act, which calls for local police officers to enforce immigration laws. As Omar Jadwat, director of an immigrant rights project, stated, “When you tell state and local police that their job is to do immigration enforcement, it translates into the unwarranted and illegal targeting of people” because of their race, language and the color of their skin. (New York Times, Feb. 21)

Trump is threatening to cut federal funds from cities that have declared themselves “sanctuary cities,” where police allegedly will not act as immigration agents. As immigrant activists point out, however, the concept of sanctuary cities has been more propaganda than reality.

At the same time, the government will  build even more detention facilites to hold the increased number of those detained. This mirrors the mass incarceration in the U.S. of primarily Black and Brown people, which already amounts to major humanitarian violations and a crisis.

The directive  speeds up deportations by expanding a program that lets government officials bypass due process protections, such as court hearings. Under Obama, “expedited removal” was used only for immigrants arrested within 100 miles of the border who had been in the country for less than 14 days. It will now include any undocumented people who have been in the country for up to two years, regardless of where they were picked up.

The guidelines also  violate Mexico’s sovereignty by not guaranteeing that every worker deported to Mexico is Mexican. This means that Hondurans, Haitians or other non-Mexican deportees will be deported to Mexico, making their situation even more precarious.

The new rules expand the definition of “criminal aliens.”  Now anyone who crossed into the U.S. without papers or has used a false Social Security number can be considered a “criminal” and be deported.

The guidelines also call for hiring at least 10,000 more ICE agents and could even empower tens of thousands of National Guard to enforce immigration law. But no new immigration judges are expected to be hired, further strengthening the lack of due process.

Finally, Trump’s new guidelines call for creating an office in ICE to help families of those supposedly killed by undocumented immigrants. This office will be known as “Victims of Immigration Crime Engagement (VOICE).”

Both as a candidate and now as president, Trump appeals to his reactionary, nativist base by painting a picture of undocumented workers as “violent criminals” and members of “drug cartels and gangs” who have carried out a wave of crimes against “U.S. citizens.”

The creation of VOICE is totally offensive to the people in this country who have been victimized by heinous police terror, unleashed primarily against African Americans and other people of color. Killer cops remain free — often still on the payroll — after shooting down or choking to death innocent people, no matter their age or mental capacity.  Where are the government offices demanding justice for them?

Trump and the Steve Bannons in this country cry that “law and order will be restored” and tell supporters that the undocumented fill jobs that should belong to them, drain public resources and step over the line for visas that others wait years for.

None of this is true. The vast majority of the undocumented in this country, like those around the world, are victims of forced migration. They are forced to leave their countries by Washington and Wall Street’s policies of military and economic intervention.

Study after study documents that fewer crimes are committed in immigrant communities than in those of people born here. But more than that, crimes by the state overwhelm any infractions by workers.

Despite how Trump’s proposed guidelines will be implemented, they nonetheless have led to a chilling climate for immigrant workers. Besides the undocumented, people with documents, those with Deferred Action for Childhood Arrivals status (who arrived as children), plus those in the system awaiting their day in court are all in jeopardy of being detained and deported.

ICE agents who are ideologically right-wing and outspoken supporters of Trump can now pick up and remove anyone convicted or even just charged with a criminal offense —  for something as minor as a broken tail light. Any person of color lacking the right “papers” is in danger.

Parents in fear of deportation are keeping their children out of school. Immigrants are staying in their homes, which especially hurts businesses owned by immigrants. Illnesses are not being treated as workers fear going to a hospital or doctor.

This climate of fear now gripping the immigrant community is what is criminal.

Resistance both inside and outside the immigrant community is phenomenal. In Chicago, principals of some public schools are directing teachers not to let ICE in without warrants and are providing know-your-rights information. In California, groups are blocking ICE buses. Throughout the country, activists are attempting to reach out to their neighbors and friends to get the word out: “You are not alone. We have your back.”

This solidarity must be seen a thousand-fold on May Day 2017. Immigrant and U.S.-born, Black, Brown and white, union workers and the unorganized, young and old, women, men and LGBTQ people must all be in the streets on Monday, May 1 — not just to defend immigrant workers’ rights, but all workers’ rights.

In order to stop these attacks, in order to defeat the Trump/Pence/Bannon agenda, in order to let the U.S. ruling class know “We will not be pushed back,” May Day 2017 must be a day of no school, no shopping, no work — and unity of all working and oppressed people.