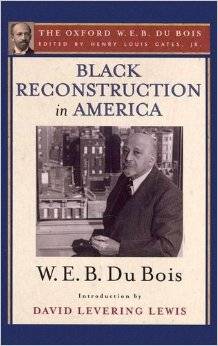 Based on a talk given by WW Managing Editor LeiLani Dowell on Feb. 16.

W.E.B. Du Bois’ “Black Reconstruction” is part of the effort that Black History Month engages in — the attempt to rectify the erasure and maligning of the lives and struggle of enslaved, formerly enslaved and immigrant Black people in the U.S. from the very founding of this country on stolen land.

Du Bois was born in Great Barrington, Mass., in 1868. He studied at Fisk University, Humboldt University in Berlin, and Harvard, where he was the first African American to earn a doctorate. He became a professor of history, sociology and economics at Atlanta University in 1897. In 1931, he began the research and writing of “Black Reconstruction.”

The book showcases a turn to Marxist analysis. Du Bois had visited the Soviet Union in 1928, and while he had some critiques he was also impressed by the emphasis on workers there.

With “Black Reconstruction,” Du Bois was correcting the historical record. Almost all histories produced at that time either negated the Black role in the Civil War and Reconstruction, or defended the overthrow of Reconstruction as the fault of Black people.

Du Bois’ book is also a plea for labor unity on the eve of the 1930’s Great Depression. He uses a specifically Marxist analysis to serve as an admonition. He writes, “The rebuilding, whether it comes now or a century later, will and must go back to the basic principles of Reconstruction … —Land, Light, and Leading for slaves black, brown, yellow and white, under a dictatorship of the proletariat.”

So Du Bois begins his book with a chapter entitled “The Black Worker.” And with this title and this placement as the first chapter, Du Bois is laying the stakes. He wants his readers to know the importance of Black labor to the developing system of capitalism on a global scale.

He writes: “Cotton grew so swiftly that … with this increase, walked economic revolution in a dozen different lines. … Black labor became the foundation stone not only of the Southern social structure, but of Northern manufacture and commerce, of the English factory system, of European commerce, of buying and selling on a worldwide scale; new cities were built on the results of black labor.”

But if Black labor was foundational to the system, it is also foundational to the resistance as well. Du Bois states that “of all human development, ancient and modern, not the least singular and significant is the philosophy of life and action which slavery bred in the souls of black folk.”

Next, Du Bois discusses the poor white of the South, whom he says was used as a “special police force” to create “an armed and commissioned camp to keep Negroes in slavery and to kill the black rebel.” How and why were poor whites able to be used this way?

Well, Du Bois notes that “the new labor that came to the United States … was not willing, after it reached America, to regard itself as a permanent laboring class. … The more energetic and thrifty among the immigrants caught the prevalent [U.S.] American idea that here labor could become emancipated from the necessity of continuous toil and that an increasing proportion could join the class of exploiters.”

In contrast, Du Bois notes that “the black worker was the ultimate exploited; … had neither wish nor power to escape from the labor status, in order to directly exploit other laborers, or indirectly, by alliance with capital, to share in their exploitation.”

These divisions resulted in, according to Du Bois, two labor movements — one seeking the abolition of slavery, the other focused on bettering the condition of white workers. And each, Du Bois notes, either ignored or was unsympathetic to the other.

The third of the cast of characters in the South is the planter. For the planter, slavery represented not just profits, but political power via the “three-fifths” compromise, which was “used not only to degrade Negroes in theory, but in practice to disenfranchise the white South.”

Planters were desperately holding on to an outdated mode of production. Du Bois says that “slavery was the economic lag of the 16th century carried over into the 19th century and bringing by contrast and by friction moral lapses and political differences.”

This all came to a head in 1860, when the cotton crop reached an all-time high in production. A year previous, John Brown had led the raid at Harpers Ferry, and the threat of further social upheaval coupled with the greed of the planters forced a crisis. Beginning with South Carolina, Southern states began seceding. The Civil War had begun.

Today, Lincoln is celebrated as the president who “freed the slaves.” But Lincoln was, in the beginning, intent on making clear that the war was not one of liberation for the millions of enslaved people. Lincoln even ordered Union troops to return enslaved people back to their “owners.” His motivation for war was to support the burgeoning Northern industrial system of capitalism, which needed a large geographical market and did not want to compete with seceded Southern states for international markets.

But in what Du Bois calls “a general strike,” droves of enslaved Black people began leaving the plantations and arriving at the Union encampments. The South, it was believed, had the advantage in the war because its white laborers were freed up to fight, since enslaved labor would supply food and supplies to the troops.

The enslaved, however, made excellent spies and saboteurs for the Union side. And once they had turned the war into a war of liberation, they would fight until the very end, even while enduring the racism and discrimination of the Northern troops.

It wasn’t until the enslaved forced upon Lincoln the consciousness that this was, in fact, a war against slavery, and that, in fact, it would not be won by the Union unless the Union emancipated them, that Lincoln issued the Emancipation ­Proclamation.

And so the period of Reconstruction begins, and Du Bois once again highlights the centrality of Black struggle. In an article that was the precursor to “Black Reconstruction,” entitled “Reconstruction and Its Benefits,” Du Bois writes: “How to train and treat these ex-slaves easily became a central problem of Reconstruction. … Three agencies undertook the solution of this problem … : (a) the Negro church, (b) the Negro school, and (c) the Freedmen’s Bureau.”

Here, Du Bois highlights Black leadership and organization. A whole chapter in “Black Reconstruction” is dedicated to the founding of the public school in the South, which he attributes directly to the desire of Black people to learn and develop intellectually. But in addition, he notes the importance of the federal Freedman’s Bureau, which he calls “an attempt to establish a government guardianship over the Negroes and insure their economic and civil rights.”

Its eventual rejection, and the eventual overthrow of Reconstruction as a whole, was, as Du Bois states, “chiefly because the new industry, the money-making financiers and organizers of a vast economic empire, hesitated at a government guardianship of labor and control of industry on a scale that might embarrass future freedom of exploitation.” Northern and Southern capital shook hands, and the federal government pulled its troops out of the South, leaving Black people defenseless, particularly in the face of Ku Klux Klan terror and violence.

I’ve been trying hard to consider what “Black Reconstruction” means in the Trump era. Certainly the connection between the overthrow of Reconstruction and the need for the Black Lives Matter movement to challenge the continued legal and extralegal murders of Black people is obvious.

Perhaps the “general strike” is one of the greatest lessons we can take. It is clear that voting the Lincoln/Johnson ticket did not result in the end of slavery. What ended it was the mass of enslaved people taking to the streets and withholding their labor.

I’ve also been thinking about the retreat of the Northern army. And in some ways, I think we can see this election as the beginnings of a retreat of the government on the issue of democratic rights. I don’t think it’s overblown to say that anything is up for grabs right now, unless we resist.

And I think that, rather than dismissing Trump and his crew as “evil,” “wrong” or “stupid,” Du Bois’s careful delineation of the motives of both sides of capital in the Reconstruction struggle encourages us to think about what this political moment says about the dead-end crisis of capitalism as a whole. Like then, the politicians of the two-party system, with different tactics, have one goal in mind — the preservation of the system of capitalism.

There is also, of course, a lesson about working-class unity. Du Bois notes that it was precisely the failure of Black-white unity that led to the overthrow of Reconstruction. Class unity “failed to work,” according to Du Bois, “because the theory of race was supplemented by a carefully planned and slowly evolved method, which drove … a wedge between the black and white workers.”

Du Bois recognized that working-class unity could have resulted in a real dictatorship of labor in the U.S., that there was serious revolutionary potential that was thwarted at the time by the machinations of the Southern planters and the Northern industrialists.

We must continue struggling for unity, and we must realize that the capitalist ruling class inculcates and promotes the racism of whites to foment divisions that are custom-made to preserve capitalism and imperialism. And we must organize ourselves for the general strikes of the future, with a clear-headed understanding of the maneuverings, opportunism and outright lies used to preserve capitalism.

Comrades and friends, we must study and we must fight. And we must continue the struggle for Black liberation, and for workers’ liberation, that was waged by Black folk and their collaborators during the Civil War and Reconstruction.