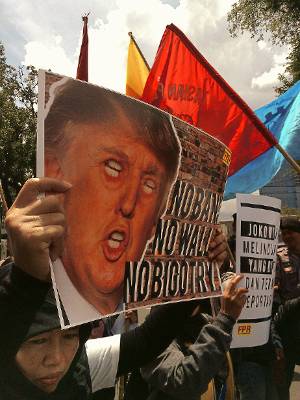 The following edited excerpt is from a Feb. 6 press release by the Indonesian Front of People’s Struggle (Front Perjuangan Rakyat — FPR).

U.S. President Donald Trump has issued an executive order prohibiting the entry of citizens of seven majority-Muslim countries to the United States for 90 days, and suspending admission of refugees. The decision clearly hurts the long-suffering people of Muslim-majority countries, which bear the stamp of “terrorism.”

Earlier, Trump issued a decree regarding the construction of a U.S.-Mexico border wall at a cost of more than $8 billion. The construction is a continuation of the Border Security Act of 2006, which was supported by [President Barack] Obama and [Senator] Hillary Clinton. Trump wants to proceed more intensively and is threatening people who offer protection to undocumented workers and refugees.

Trump’s immigration policy criminalizes immigration and scapegoats refugees, immigrants and Muslims. In fact, the U.S. is the main source of the crises of war and aggression, poverty, unemployment and refugees. Refugees and immigrants are the victims of aggression and plunder by the U.S.-led imperialists, and destabilization and neoliberal economic policies of both Democratic and Republican U.S. governments. It is the root of the global refugee crisis and forced migration.

The Trump regime is supported by entrepreneurs of the world oil monopoly, which earned huge profits from invasion during the George H.W. Bush regime. Trump is continuing the anti-Islamic panic and the War on Terror championed by the U.S. during the Bush administration since the events of 9/11.

The seven countries banned entry to the U.S. have been vandalized and bombed by the U.S. to master those countries’ natural resources. The attack recently carried out in Yemen is part of a U.S. scheme to take control of Yemen.

Trump, along with a handful of the elite and the giant corporations, is trying to divert popular anger in the U.S. to Muslims, Mexico and immigrants. It is a way of creating multiple benefits for elites and corporations on the shoulders of the working class and the exploited and oppressed people all over the world.

In Indonesia, Trump has a resort and amusement park in Tanah Lot Bali and Lido, West Java. Naturally, Trump will build on community land. His policy will speed up the expropriation of land in Indonesia and other semicolonial countries trying to save themselves from the crisis in monopoly capitalism.

We condemn the immigration policies of the U.S. imperialist government under Donald Trump, and demand:

Exempt the citizens of the seven countries that are still detained by U.S. immigration and give them permits to visit, study and go back to school and work. Give refugees the right to live and be protected.

Revoke the Executive Decree, which discriminates and promotes anti-immigrant and anti-Muslim sentiment. Revoke immediately the development of the U.S.-Mexico border wall. Stop all forms of criminalization of refugees and immigrants conducted by the U.S. government.

Reject all forms of U.S. imperialist intervention and war aggression. The imperialists evoke anti-Muslim sentiment to grab these countries’ natural wealth and to completely dominate politically, economically, culturally and militarily.

FPR calls for all Indonesian people from various ethnic groups, races, and religions and all people of the exploited and oppressed workers, peasants, semi-proletariat, intellectuals, professionals and others to:

Unite and give solidarity to Muslim and immigrant brothers and sisters who face the policies of the U.S. imperialists.

Fight against all schemes and U.S. imperialist policies to grab and plunder the nation’s sovereignty through intervention and wars of aggression.

Oppose all policies of the Jokowi-JK government that implement U.S. neoliberal schemes that attempt to dominate the homeland of Indonesia.