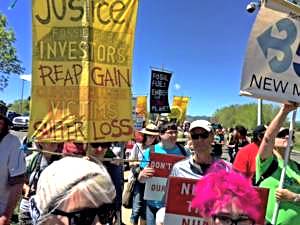 The plant releases high levels of sulfur dioxide (SO2). The EPA says: “Short term exposure to sulfur dioxide can harm the human respiratory system. … Children, the elderly and those who suffer from asthma are particularly sensitive to effects of SO2.”  SO2 can react with other compounds and form tiny particles that penetrate and damage the lungs. Sulfur dioxide also forms acid rain, which is damaging to trees, plants and ecosystems. (See tinyurl.com/jrztuhb)

In December, a petition signed by 1,300 Colorado Springs, Colo., residents and a joint letter signed by 45 local organizations were delivered to the CSU and Mayor John Suthers.  They demanded publicizing of the air quality studies conducted by engineering firm AECOM showing unhealthy sulfur dioxide levels. The letter states that CSU is withholding the study from the public and the EPA, claiming attorney-client privilege. The court upheld the utility’s claim that divulging the study’s contents is a violation of attorney-client privilege.

Leslie Weise, a single mother and 350 Colorado Springs leader, who inadvertently saw the report, but returned it, was being charged with discussing its contents and faced jail time and hefty fines. Her son attends school near the power plant, and she became concerned about pollution from the plant, which is located near the downtown area. Neither the polluting utility nor the city which kept the report secret have been sanctioned, but an individual concerned about the community’’s health faced punitive actions.

The protest letter asserts that residents of Colorado Springs and the surrounding area have a right to know what pollutants they are breathing.  It further says: “We share a deep concern for the health, welfare and quality of life for all the citizens of the Pike’s Peak Region, especially the 387,000 people, including 120,000 children, living within five miles of the Martin Drake power plant, which … has a history of air quality violations and safety issues. It is a dereliction of responsibility and duty to not put the health, safety and welfare of your citizens above protecting the utility from pollution violation penalties.”

The letter calls for an end to secretive decision-making, withholding of air quality information from the public and attempts to escape regulatory scrutiny. It demands release of the air quality study and withdrawal of legal  action against Weise and any residents who exposed Clean Air Act violations.

There was great community support at Weise’s hearing in Denver on Jan. 6. Residents of Colorado Springs and adjoining towns affected by the utility’s pollution, as well as environmentalists, had gathered petition signatures, contacted the press, made phone calls, collected funds for her legal defense and driven through snowstorms to be at her hearings.

News broke on Feb. 8 that CSU had dropped all charges against Weise.  That outcome is a tribute to the determined struggle of the people of Colorado Springs. The effort will continue to get the report publicized, to seek more sustainable, safer ways to meet the area’s energy needs, and to shut down Drake.