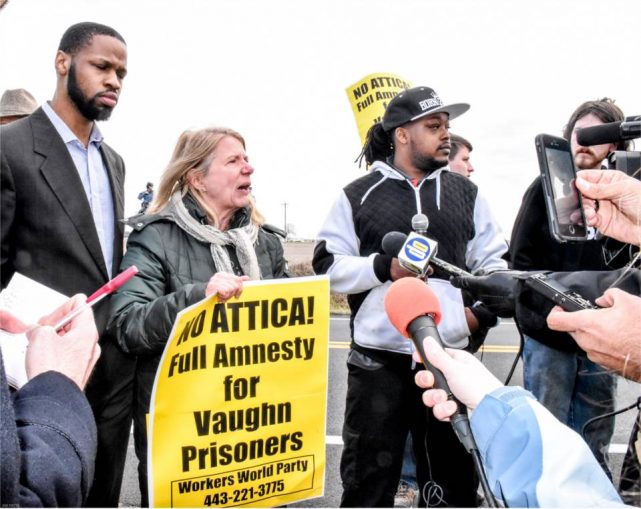 Smyrna, Delaware – The Vaughn “Correctional Center” in rural Smyrna, Del., made international news on Feb. 1 when prisoners set in motion an organized rebellion. They took several prison employees hostage, after having carried out a long and peaceful struggle in vain to improve inhumane conditions inside the prison.

During negotiations, while the hashtag #VaughnRebellion circulated online, prisoners were able to get a phone call out to a local media outlet, The News Journal. The paper reported that a prisoner said: “We’re trying to explain the reasons for doing what we’re doing. Donald Trump. Everything that he did. All the things that he’s doing now. We know the institution is going to change for the worse. We got demands that you need to pay attention to, which you need to listen to and you need to let them [be] known. We want education first and foremost. We want a rehabilitation program that works for everybody. We want the money to be allocated so we can know exactly what is going on in the prison, the budget.”

Early the next morning, a police task force caused heavy damage to Building C, using heavy machinery to breach and enter the building while prisoners and staff were still inside. Robert Coupe, secretary of the Delaware Department of Safety and Homeland Security, reported to media that during this entry prisoners shielded one of the hostages, a prison counselor, with their own bodies during the demolition and assault on the building. The other hostage, identified as Sgt. Steven R. Floyd, was found unresponsive and pronounced dead on the scene.

Later that day, Delaware police at a press conference declined to give any information about injuries prisoners sustained during the rebellion or the potential cause of Floyd’s death.

The Vaughn Rebellion ended the morning of Feb. 2. Within hours, members of Workers World Party, the Baltimore Peoples Power Assembly and former Vaughn prisoners, as well as family members of current prisoners and local supporters, gathered outside Vaughn to stand in solidarity with the prisoners.

The protesters demanded an independent investigation, separate from the police and prison administration, of conditions inside the prison, as well as of the events during the rebellion.  A crucial aspect of such an investigation includes members of the community being able to conduct uncensored interviews with inmates in order to gather information without the prisoners facing reprisals.

Former prisoners spoke about conditions inside Vaughn. Isaiah McCoy, whose 2012 conviction was vacated because of prosecutorial misconduct and judicial error, said he was beaten, had his food spat in and his letters tampered with while there. James Green, another former inmate, said the rebellion was the only possible outcome given mistreatment from correctional officers and the administration’s refusal to investigate the officers’ misconduct.

Shortly after the demonstration, a prisoner inside Vaughn contacted Workers World Party with information about their demands and some words for the general public. The prisoner emphasized that the narrative given by the media about Sgt. Floyd is false.

The prisoner stated: “I knew Sgt. Floyd for 10 years, he was involved in at least one attempted murder and one murder. He was around long enough to be an expert in using the system to attack inmates with write-ups for personal reasons. Inmates have no rights of due process inside the prison, and the administration always sides with the word of a correctional officer, even if they are proven to be lying. Sgt. Floyd has used his position to deny visits if family members who have traveled a long way are even a minute late, denied showers to prisoners, denied phone calls, cut recreation time on a whim which is supposed to be no less than 1 hour and 30 minutes, and frequently used unprofessional and foul language when talking to prisoners. He has consistently done all of these things to attack prisoners for personal reasons. Everyone here knows who he is, and they will tell you the same thing.”

The prisoner’s message to everyone on the outside was: “Now is the time for all of us to rise up together. A movement is growing and building everywhere. My dream is to see 1,000 people outside this prison with T-shirts, signs and banners.”

A full statement from the Vaughn prisoners will soon be released by Workers World Party.

In addition to heinous misconduct in particular by Sgt. Floyd, reports of racism and torture inside Vaughn are backed up by recent investigations of the Delaware prison system. These include racist remarks from hundreds of local citizens calling for the lynching and beating of inmates and demonstrators.

Delaware, the second-smallest state, has an incarceration rate 12 percent higher than the already bloated national average. Two-thirds of prisoners in Delaware are Black, and 86.8 percent are incarcerated for nonviolent drug offenses. African Americans also make up two-thirds of the 344 percent increase in Delaware’s prison capacity over the last 20 years.

Local right-wing Delawareans showed up at the solidarity demonstration to intimidate the protesters. They launched a massive campaign of harassment via social media and direct calls to organizers, sending racist messages and death threats before, during and after the demonstration.

One man from a right-wing group told media when asked why he was there: “After Obama came in, it’s all gone haywire. Now the blacks think they can run the prisons.”

The deteriorating conditions inside the U.S. prison system are usually given a spotlight in the media only when there is violence involving prison staff, as in this case or the bloody Attica Rebellion, in which both prison staff and prisoners were gunned down by state police called in by Gov. Nelson Rockefeller in 1971.

Prisoners, former inmates and advocacy groups across the country have been working for years to improve conditions inside prisons for both inmates and staff, but have met with silence and reprisals by prison administrations.

Phone calls paid for by family members cost much more than normal collect calls due to contracts that provide kickbacks to the state prison system or county jails. Commissaries charge as much as double or triple what the same goods cost at most public stores — similar to the old “company store” system in which isolated or sharecropper populations were exploited for profit.

A common meal served in prison is Nutraloaf, similar to wet dog food in composition. The work of preparation and serving meals is given to prisoners as punishment, and has been the subject of many lawsuits for violating restrictions on cruel and unusual punishment.

As forced labor, legal under the U.S. Constitution and called the last holdover of slavery, millions of prisoners are made to work for pitiful wages. Substandard medical care meets the legal requirement for negligence. Prisoners must often wait 48 hours to speak to medical staff, even in urgent situations.

Recent years have seen extreme cutbacks of necessary services on the pretext of nebulous “budget concerns.” This does not explain why prisons are cutting services that are offered completely free by religious groups, nonprofits, community advocacy groups, education charities and organizations such as Toastmasters.

Delaware Gov. John Carney released a statement, saying: “This was a long and agonizing situation. Our priority now will be to determine what happened and how this happened … and we will make whatever changes are necessary to ensure nothing like it ever happens again.”

But these horrible conditions exist in the context of a racist system that incarcerates people of color, especially Black and Latinx people at a far higher rate than that of whites. When asked about the rebellion and the four hostages who were taken, Sharon Black, a leader of Workers World in Baltimore, replied, “Rebellions, as Dr. Martin Luther King said, are the weapon of those who’ve been silenced.  What about the 2,500 prisoners who are being held hostage to the worst kind of inhumane, subhuman kind of conditions? We must hold Gov. Carney accountable to his statement and make sure he makes the necessary changes to conditions inside Vaughn and elsewhere. We will be following up on this.”

Workers World Party and the People’s Power Assembly will be working to hold a community hearing in Dover, Del., so that an independent investigation can move forward. Former prisoners, family members and members of the community can present evidence, tell their stories and call for the changes that need to happen inside Vaughn Correctional Center and other prisons across the U.S.