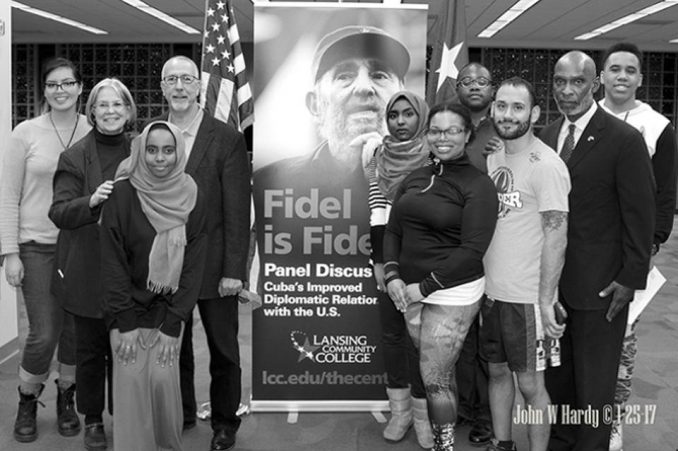 Lansing, Mich. – The Lansing Community College Center for Engaged Inclusion hosted a panel discussion on Jan. 25 titled ”Cuba’s Improved Diplomatic Relations with the U.S.” It was part of a month-long featured display of images of Fidel Castro in later life. Noted Cuban photographer Roberto Chile, who accompanied Fidel as his personal cameraman from 1984 to 2006, captured the images and video vignettes.

Cuban-born moderator Felix Sharpe-Caballero presented a series of short videos giving a view of Fidel Castro that challenged the corporate media’s one-note reporting about a man clearly respected and loved around the world. The audience included members of LCC’s Black Student Union, Muslim sisters in hijab, civil rights veterans and a range of ages.

Memorably, participants saw Fidel tenderly welcoming Chernobyl children who were invited to Cuba to recover from the nuclear meltdown in Ukraine, as well as a humorous exchange on the decision to relinquish his military uniform for a traditional guayabera shirt for an event. One video also showed Fidel meeting the young Elián González for the first time and then celebrating the boy’s completion of first grade with gifts of chocolates and a book by Cuban independence hero José Martí.

Introductory remarks were given by panelists Wayne County Commissioner Burton Leland, recently returned from Cuba, and Dr. Abeeku Ricks, a 2016 graduate of Cuba’s Latin American School of Medicine and a representative of the National Network on Cuba. Then Sharpe-Caballero fielded audience questions.

Originally planned for U.S. and international viewing during 2016 to celebrate the 90th birthday of Cuba’s historic leader, the Fidel exhibit continued through January at the LCC Library. This is the 14th U.S. program featuring the exhibit in six months.