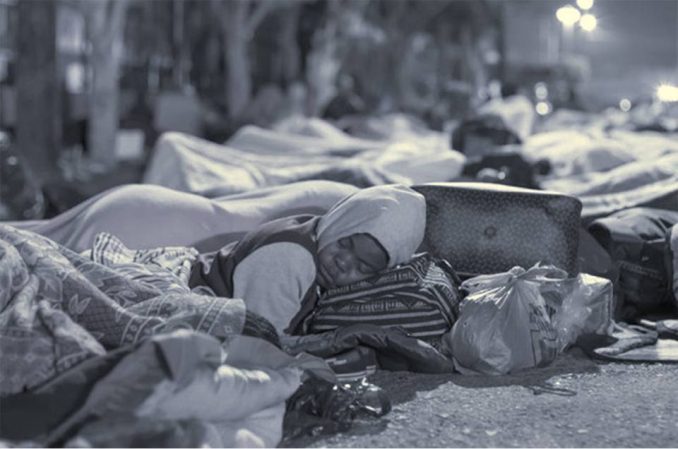 Haitian children sleep outside at border.

Since last summer, thousands of Haitians have hit a roadblock on the Mexican side of the U.S. border while trying to use a wrinkle in U.S. immigration laws, called Temporary Protective Status, to enter the United States.

Haitians stuck in Tijuana have overflowed all temporary shelters, many of which lack facilities to handle such large numbers. Some Haitians have been forced to seek shelter in Mexicali, a large town east of Tijuana.

Gloria Verdieu’s Dec. 31 Workers World article covered Haitians’ deplorable conditions. Just in the past few weeks, conditions have worsened, however, since the number of Haitian refugees in Tijuana has grown rapidly. Shelters supply one meal a day, little availability for washing, and force some Haitians to sleep outdoors.

Haitians gained TPS, which allows them to live and work in the U.S., because conditions in Haiti were unsafe after the earthquake of 2010. Normally TPS is awarded only to people already in the U.S., but was extended to people who applied on the border.

Almost all Haitians in Tijuana had worked in Brazil, which needed their labor, both to handle the World Cup 2014 and the Olympics in 2016 and to sustain Brazil’s boom. However, even before the Olympics started, Brazil’s need for labor was slowing down and many Haitians were being laid off, despite being paid much less than most other workers.

Valéry Numa, a Haitian journalist quoted by the Sept. 24 Miami Herald, estimates that 40,000 Haitians left Brazil for Chile in 2014-15. But Chile was just a way station to the United States. Most of the Haitians began the long, arduous and dangerous trek north, confronting cops, people smugglers, bus companies and bandits.

Even though Jeh Johnson, President Obama’s secretary of Homeland Security, declared Sept. 22 that conditions in Haiti had improved enough that TPS would no longer be available, Haitians kept on coming. They saw even a small chance of entering the U.S. as giving them more hope than returning to Haiti, where there were no jobs and a totally devastated economy.

What makes all these Haitians patiently waiting for their immigration reviews on the Mexican border more significant is the role of Breitbart News. Last fall, when it was controlled by Trump’s current political strategist Stephen Bannon, Breitbart published at least 10 articles on Haiti. (Some reports say Bannon is responsible for Trump’s immigration policy.)

Most of the Breitbart articles were about the horrible deeds of the Clintons in Haiti. Two stand out. One claims that the number of undocumented immigrants from Haiti increased by over 600 percent in fiscal year 2016. The other highlights the surge of Haitians at the border.

Given the vast damage the U.S. has done to Haiti, anti-imperialists and many others can agree that any Haitians who feel they are better off in the U.S. have a right to enter and live here.