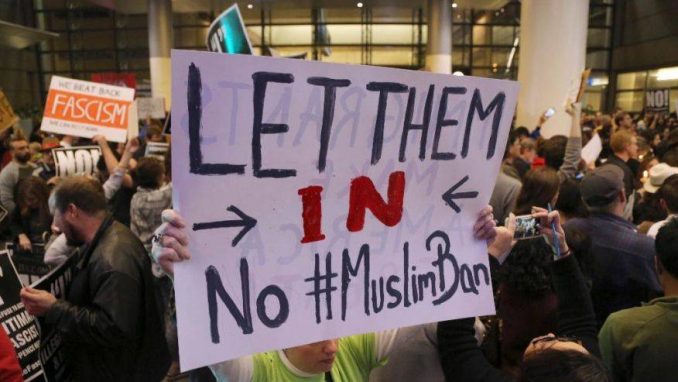 Trump, on the night of Jan. 30, fired the acting attorney general of the U.S., Sally Q. Yates, for refusing to defend the president’s executive order barring refugees and travelers from seven predominantly Muslim countries. Trump’s order has caused tens of thousands around the country and the world to demonstrate at airports in defense of immigrants and freedom to travel. Yates was an official left over from the Obama administration, and Trump’s firing of her and others is also meant to open up jobs for his coterie of office seekers.
Make no mistake. The opposition by Yates and the rest of the State Department has nothing to do with the kind of solidarity with immigrants being shown by the multitude of demonstrators. It is motivated strictly by the effort to defend the interests of U.S. imperialism’s foreign relations and business interests, built up over years, and which Trump is trampling on at the moment.

As Trump tries to consolidate his administration, promoting far-right, racist ideologues like Stephen Bannon to a strategic position in the National Security Council (see editorial, page 10), he is stoking the fires of mass resistance. Never has a president been so opposed by the masses right from the gitgo.

He is also causing panic even in his own class of billionaires, who fear that his positions on trade and globalization will undercut their ability to exploit freely around the world and shift alliances away from U.S. control.

There’s only one real answer to the Trump gang and that is to keep the mass resistance growing. Already, newspapers of the Wall Street establishment like the New York Times are counseling Trump to rely on more “thoughtful, experienced hands” like — the new Secretary of Defense James Mattis, a former Marine Corps general, and Joint Chiefs head Gen. Joseph Dunford!

The workers, the oppressed, don’t need to be “rescued” from Trump by the military-industrial complex or the Democrats, thank you very much! Our movement can push back this obscene attempt to go back to when racism, sexism and xenophobia were “great.” Stay organized! Stay in the streets!