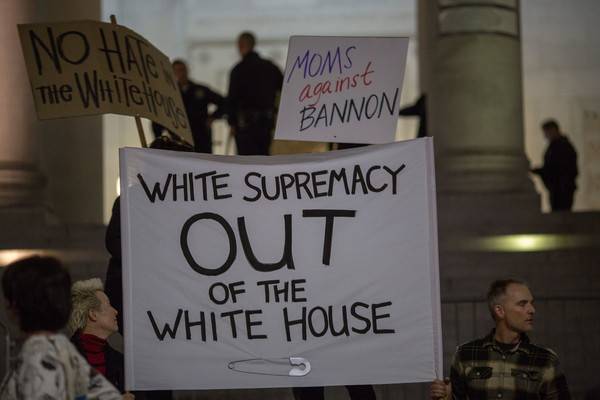 What is Stephen Bannon doing on the National Security Council? The NSC is the executive committee of the military- industrial complex and includes a secret assassination panel. (Reuters, Oct. 5, 2011)

The proto-fascist Bannon is Trump’s chief political strategist and former head of alt-right Breitbart News, the favorite media outlet of white supremacists. It was Bannon who overruled the Department of Homeland Security’s decision to exempt green card holders from Trump’s ban on travelers from Muslim countries. (New York Times, Jan. 29)

While Bannon was given a permanent seat on the NSC, the position of Marine Gen. Joseph Dunford, an Obama appointee who heads the Joint Chiefs of Staff, was downgraded. Dunford will attend NSC meetings only when invited. So will the Director of National Intelligence.

The NSC is already led by former Army Lt. Gen. Michael Flynn, the ex-head of the Defense Intelligence Agency, who was fired from that post by President Obama in 2014.

Since then Flynn has tweeted about Hillary Clinton being involved with “child sex trafficking” and having “secretly waged war” on the Catholic Church. Flynn also accused Obama of having “laundered” money for terrorists. (Politico, Dec. 5, 2016)

Making Flynn National Security Adviser and promoting Bannon while demoting Gen. Dunford means the NSC can conduct meetings with only Trump allies. That’s a sinister formula for a police-state takeover, perhaps in coordination with the FBI.

This could be a real option if there’s a new war or just to crush any opposition to Trump. In the last 75 years, U.S. capitalism hasn’t gotten out of an economic crisis without a new war.

Helping this nightmare scenario are Senate Democrats. Only one senator voted against confirming “Mad Dog” James Mattis as Trump’s Secretary of Defense.

Kirsten Gillibrand of New York was the only one who objected to putting the former Marine general in charge of the Pentagon, which makes a mockery of civilian control of the military. The rest of the “world’s greatest deliberative body” had no problem with the brass hat, who has declared, “It’s fun to shoot some people.” (ABC News, Dec. 1, 2016)

It’s not so surprising that Senate Democratic leader Chuck Schumer voted for Mattis and Kelly. But so did Sen. Bernie Sanders. That’s not why millions of voters cast their ballots for Sanders in last year’s Democratic primaries.

Sanders’ vote supporting “Mad Dog” and Kelly wasn’t so much a capitulation to militarism as a vote to ally with it. Liberals like Sanders actually believe that surrounding Trump with “grown-ups” like these two ex-generals will somehow restrain the White House.

That illusion was blasted when Trump appointed Bannon to the National Security Council. Only the people can stop Trump. Stay in the streets!