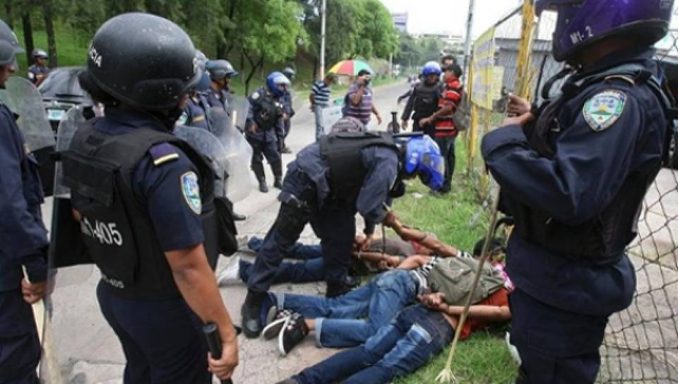 Honduras police agents detain campesino leaders in the Aguan Valley at a protest in the capital, Tegucigalpa. Military soldiers increasingly have taken on police roles in Honduras.

With the advent of the ominous Donald Trump administration, a look at the beleaguered nation of Honduras is critical in order for the anti-war and solidarity movement to step up its work — not only with Honduras but for all of Latin America and the Caribbean. Solidarity with Central America is particularly key in light of the crisis of forced migration.

Developments in Honduras address many social movements mirrored in the U.S. — the struggle for migrant rights, for climate justice, against racism and the rights of Indigenous people are examples.

Conditions are magnified in Honduras, however, as they are in the context of U.S. imperialism’s centuries-long drive for domination of Latin America and the Caribbean. This drive continues, no matter whether under a Barack Obama or a Trump administration.

Since 2009, when the progressive presidential administration of Mel Zelaya was overturned by a brutal coup orchestrated by U.S. imperialism, conditions for the Honduran people have deteriorated dramatically.

The Obama administration, and Secretary of State Hillary Clinton in particular, allowed the overthrow of the fair election of President Zelaya because Zelaya was attempting to improve the standard of living for the poorest of the country.

A pro-imperialist, pro-capitalist administration was then installed, ushering in a wave of repression and a further decline of the standard of living.

According to TeleSUR: “Honduras is … the second poorest country in Central America and the sixth most unequal country in the world, according to World Bank statistics. The poverty rate currently stands at 64.5 percent, while 42.6 percent of Hondurans live in extreme poverty.” (Jan. 6)

Honduras has also been deemed one of the most dangerous countries for human rights activists, journalists and unionists in the world. Indigenous people, Afro-Hondurans and the LGBTQ community are especially targeted for repression and violence.

For example, on Jan. 11, well-known Garifuna leader Miriam Miranda and three other members of OFRANEH (Fraternal Organization of Black and Garifuna Peoples) were stopped by armed agents of the state and held for several hours. The OFRANEH organization has been consistently targeted by the Honduran police and military.

The Garifuna people are descendants of West African slaves and number around 100,000 people in Honduras.

This was not the first time Miranda or members of OFRANEH have been detained. In fact, Miranda’s life, like that of Berta Cáceres, has been threatened several times.

The violent repression against Honduran freedom fighters was especially brought to light on March 3, when Cáceres, an environmentalist and social justice leader, was shot and killed in her home.

Cáceres had won several awards and was recognized around the world for her work to stop a hydroelectric project on her land. The Global Witness organization reports that at least 120 environmental activists have been killed in Honduras since 2009.

Cáceres’ family, as well as the entire movement, believe that Cáceres was killed by the Desarrollos Energéticos SA corporation, owner and operator of the Agua Zarca hydroelectric project in Honduras, and the Honduran government, who contracted assassins to murder her and other activists.

Cáceres was a leader of the Indigenous Lenca people and led a bold and vibrant struggle against the Agua Zarca dam. This dam, located on Lenca land, was controversial because it was imposed without consent from the local communities and was a threat to the environment.

Even though eight people have currently been charged by the government for her murder, the family and her organization continue to heroically demand structural changes and for the arrest of those at the top who ordered her murder.

Tens of thousands have been killed in Honduras since 2009. One source of the violence is the horrid drug trafficking that the U.S. is suspiciously unable to halt. This has forced tens of thousands of Hondurans to flee for their lives and make their way to the U.S.

The Observatory for the Protection of Human Rights Defenders reported on Dec. 1 that “human rights defenders in Honduras face killings, constant threats, and criminalization, making the Central American country one of the most dangerous in the world for human rights ­activists.”

This U.S.-made violence and instability is the cause of the forced migrations. If and when Trump decides to further militarize the border or escalate Obama’s deportation policies, more deaths at the border and in Honduras can be expected.

Several media sources, including NBC news, reported on Jan. 19 that a large spike of particularly Central American migrants had arrived at the Texas-Mexico border in order to enter the U.S. before Trump’s inauguration.

Developments in Honduras and Central America are not an isolated phenomenon. They are part and parcel of longstanding U.S. policies.

A Truthout Jan. 17 report stated that “U.S. military funding for Honduras during the Obama administration has caused unprecedented levels of violence” and “has exacerbated gang activity and local government impunity. Donald Trump’s presidency will likely worsen these current trends.”

The report continues: “President-elect Trump’s appointment of Gen. John Kelly to head the Department of Homeland Security is a worrying sign. Kelly was head of the U.S. Southern Command during the Obama years and oversaw violent, counter-narcotic efforts across Latin America. He’s a drug war zealot.”

As has been stated by the anti-war and progressive movements for decades, the billions that Washington spends in Colombia, Mexico and elsewhere to allegedly fight drugs has been used instead to militarize those countries and to repress all those who struggle — all in order to protect U.S. corporate interests.

It is unknown what selected President Donald Trump will actually do in Latin America. But imperialism’s attempt to derail the left turn in Latin America — in Venezuela, Bolivia and Ecuador in particular — will surely continue and is a danger to the peoples of the Americas.

Solidarity with the struggles in the Americas is critical. Later this year, for example, Xiomara Zelaya is expected to run for president in Honduras. She has declared that Honduras must fight for “democratic socialism.”

A victory for Zelaya would be helpful to the fight to defend President Nicolás Maduro in Venezuela and Evo Morales in Bolivia.

Solidarity is imperative, not just for the Central and Latin American people but for the movement here as well. A victory for the Lenca people in stopping the Agua Zarca dam, for example, is a victory for Standing Rock.

Now more than ever, our fight against the capitalist system must go global.