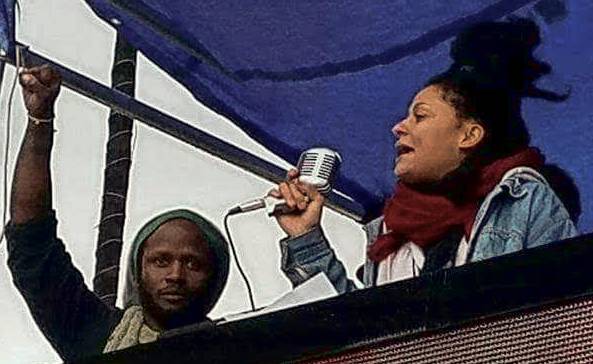 Rebecka Jackson gave the following speech at the counterinauguration protest in Los Angeles on Jan. 20.

I am here from the International Action Center and Workers World Party. At the International Action Center we create broad-based, grass-roots actions opposing U.S. wars abroad while fighting racism and economic exploitation of workers at home. We connect struggles and bring together communities of color, women, lesbian, gay, bi and trans people, youth and students, immigrant and workers’ organizations in order to build a progressive movement for social justice and change. We work toward the liberation of all peoples living in the U.S. and around the world.

The IAC is anti-capitalist and anti-imperialist. We strive to end human suffering caused by living under a system that puts profit before people’s needs.

Workers World Party is a socialist organization that has historically fought to protect the exploited peoples here and all over the world. We fight for a world without poverty, war, police, racism and bigotry. Workers World Party is a militant participant in all the progressive movements in the United States and has pioneered in relating Marxism to the various struggles against oppression — including the struggles for national liberation, the women’s movement and the lesbian, gay, bisexual, transgender and queer movements. We want to build a society where the workers are in power and put the vast wealth we produce to use for the benefit of people’s needs, instead of lining the pockets of the superrich.

Our goal here today cannot just be to stop Trump. We have to stop the system that created Trump. That system is capitalism.

Trump is a perfect example of everything that capitalism, imperialism and colonialism represent — the very things that this country exists on. His reckless, greedy businesses, his entitlement to other people’s bodies, his division of working-class people, his hatred, his lies.

Trump exists because we took too long to get in the streets. We should have been out here years ago, and we should be out here every day.

We need to get out here for all the Black and Brown people the police murder.

We need to unite here and connect our struggle to oppressed people all over the world.

Black and Brown people in Los Angeles need to connect our struggles. We are a huge city, made of working-class people of color. Together we are unstoppable.

I do have to be thankful to Trump for one thing. Because if it was Hillary [Clinton], we’d be living in the same world, but with fewer of you in the streets now.

The lies are falling apart, and everyone that is out here today is out here because they saw what this nation truly is and who it truly serves.

The Republican party and Democratic party are the same; they were built to serve the ruling class, not serve the people. They are built on corporations and profit.

Today, this march is the first step in tearing down this whole, evil system. A system that was built on genocide and fueled by slavery.

What can you do right now? Think deeper, research deeper.

We have to learn more and begin connecting the people’s struggles across the globe. We need to accept them as our own struggle and fight for them, not benefit from their labor, not turn a blind eye to their existence. So the first thing to do is learn. Join an organization with history, especially a history of revolutionary socialism.

Right now, leaders need to come from the communities that will be most affected by a Trump presidency: people of color, women, the LGBTQ community. Most critically at risk are trans women of color.

So, for all of us: Let’s create real solidarity that can protect those who need it most, and fight those who create those risks. Workers, all oppressed people, now is the time to stand together against the threats of capitalism embodied by Trump and his cabinet.

We are living in a time of great social change where the status quo is rewritten. It is up to all of us to fight to ensure that change is a step towards a more just, equal and progressive society, and not a fallback into the bigotry of our past.

If you’d like to get more information on what we do, please come to our table for information, activism and resistance to U.S. militarism, war and corporate greed, linking with struggles against racism and oppression within the United States.